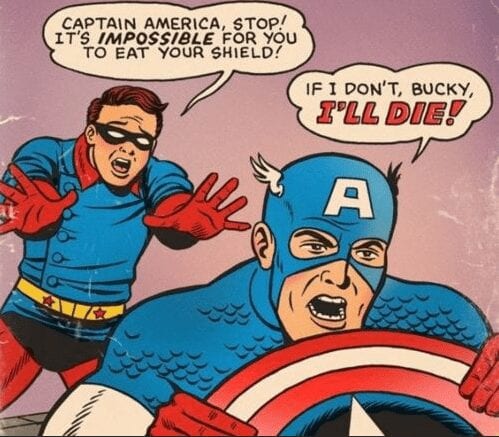 When I initially read the reviews of Captain America: Civil War I thought, “Hmm … people seem to like this.” I mean, strong Rotten Tomatoes score, positive reviews, great word of mouth. Hence, with some excitement the son and I hit the theater yesterday, bottle of water in hand, expectations mildly high.

I fucking hated it.

I didn’t merely fucking hate it. I fucking hated it. In my life, I believe I’ve walked out of two movies. One was the first Star Trek, way back when I was a child. The second was A.I., that brutal Haley Joel Osment diarrhea loaf from a decade or so back. This would have, without fail, been the third, had my 9-year-old son not been sitting next to me.

I don’t wanna be the guy who bashes every superhero film, because many I’ve loved. The first two Superman flicks (with Christopher Reeve and Gene Hackman) were simply fine filmmaking. Chris Nolan’s Batman trilogy was spectacular, as was the first Batman with Michael Keaton. Deadpool, which I saw with my nephews months ago, was awesome. Actually, so was Kick Ass. So, to be clear, I am not an across-the-board superhero hater.

But this … this was just the worst.

I’m not gonna go through the entire film, nugget of shit by nugget of shit. I’m not gonna tell you how the plot makes no sense; how the moronic action sequences turn brains into pudding; how the recruitment of a 17-year-old Spiderman is inane and how Paul Rudd doesn’t fit and how the emergence of Black Panther just saps the cranial lobe of lingering juices and how this was clearly another easy paycheck for a bunch of actors itching to star as a transsexual pimp in the next Wes Anderson flick. No, I refuse to tell you any of that.

Instead, I’ll simply bring up one element of the film, and allow you to ponder: So there’s this bad villain guy. And he’s cruel. Really cruel. And he has this army of soldiers, who are stronger and faster and meaner than the Winter Soldier—who’s plenty strong and fast and mean. And this bad guy can unleash his villains on the superheroes, and have a pretty good chance of killing them all. And he even succeeds in basically trapping Captain America and Iron Man in a steel room, along with Bucky—the Winter Soldier-turned-good guy. Again, HE HAS THEM ALL TRAPPED IN A ROOM! AND HE HAS HIS ARMY OF SOLDIERS! AND THEY’RE READY AND TRAINED TO KILL! LIKE, THEY’RE RUTHLESS AND SNARLING AND DOMINEERING. So what does the evil man do? He kills all of his soldiers, because he has a startling plan.

Fuck, I don’t have a because. Actually, I do. Because by the final scenes of this dreck, I’d gouged out both of my eyeballs with a pencil, poured acid spewage over my skull and prayed for the lord of darkness to take my soul to the depths of hell.

Alas, I was still in the theater for the credits.