My thoughts on Melania Trump’s speech 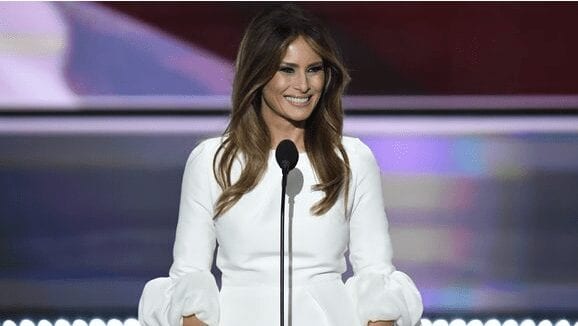 In the aftermath of Melania Trump’s speech from the Republican Convention, I wanted to share a few thoughts of my own …

A lot has happened to us all since 1987. That’s the year The Art of the Deal was published and became the bestselling business book of the decade, with over three million copies in print. (Business Rule #1: If you don’t tell people about your success, they probably won’t know about it.)

A few months ago, I picked up The Art of the Deal, skimmed a bit, and then read the first and last paragraphs. I realized that after seventeen years they still rang true. I could have written these words yesterday:

First paragraph: I don’t do it for the money. I’ve got enough, much more than I’ll ever need. I do it to do it. Deals are my art form. Other people paint beautifully on canvas or write wonderful poetry. I like making deals, preferably big deals. That’s how I get my kicks.

Last paragraph: Don’t get me wrong. I also plan to keep making deals, big deals, and right around the clock.

It’s now 2004, I’m still making deals around the clock, and I still don’t do it for the money. I don’t think you should do it for the money, either. Money is not an end in itself, but it’s sometimes the most effective way to help us realize our dreams. So if you’ve got big dreams and you’re looking for a way to make them happen, this book is for you.

Five Billion Reasons Why You Should Read This Book

How to Get Rich. That’s what I decided to call it, because whenever I meet people, that’s usually what they want to know from me. You ask a baker how he makes bread. You ask a billionaire how he makes money.

And billionaire authors with their own Manhattan skyscrapers and hit prime-time TV series are the rarest of all. I’m pretty sure I’m the only one, though Oprah could give me a run for the money if she ever decides to write another book and get into real estate.

Business Rule #2: Keep it short, fast, and direct. The following pages will be straightforward and succinct, but don’t let the brevity of these passages prevent you from savoring the profundity of the advice you are about to receive. These stories and words of wisdom have been distilled from almost thirty years at the top.

So here it comes: The Scoop from The Donald. After you make your first billion, don’t forget to send me a thank-you note. You know the address.

PART I
The Donald J. Trump School of Business and Management

I am the chairman and president of The Trump Organization. I like saying that because it means a great deal to me. There are almost twenty thousand members of this organization at this point. I did a print ad once in which I declared, “I only work with the best.” That statement still stands.

More and more, I see that running a business is like being a general. Calling the shots carries a great deal of responsibility, not only for yourself, but for your troops. Your employees’ lives, to a large extent, are dependent on you and your decisions. Bad strategy can end up affecting a lot of people. This is where being a leader takes on a new dimension. Every decision you make is an important one, whether there are twenty thousand people working for you or just one.

If you are careful when finding employees, management becomes a lot easier. I rely on a few key people to keep me informed. They know I trust them, and they do their best to keep that trust intact. For example, when I need to know something about my casinos and hotels in Atlantic City, I know I can call up Mark Brown, my CEO, and get a fast and informed answer. If I call Laura Cordovano over at Trump Park Avenue and ask about sales, she’ll give it to me exactly as it is. If I call Allen Weisselberg, my CFO, he’ll tell me what I need to know in twenty words or less. My senior counsel and Apprentice adviser, George Ross, can do it in ten words or less. Find people who suit your business style and you’ll have fewer problems to deal with as time goes on.

Good people equals good management and good management equals good people. They have to work together or they won’t work together for very long. I’ve seen good management get by with mediocre people, and I’ve also seen excellent people get stuck in the mires of bad management. The good managers will eventually leave, followed by the good workers, and you will be left with a team that gets along because they’re all mediocre. Save yourself time by getting the best people you can. Sometimes this can mean choosing attitude over experience and credentials. Use your creativity to come up with a good mix.

Creative people rarely need to be motivated–they have their own inner drive that refuses to be bored. They refuse to be complacent. They live on the edge, which is precisely what is needed to be successful and remain successful.

One of my former employees was in charge of a new project. He had done a thorough and acceptable job, but I felt that something was missing. It wasn’t fantastic, which, knowing his capabilities, it should have been. I decided to challenge his creative ego by mentioning that it was fine but seemed to lack inspiration. I politely asked him whether he was genuinely interested in the project and suggested that perhaps that might be the problem.

Well, the guy went ballistic on me. He was deeply insulted. And, as you can probably guess, the revision he turned in was terrific. The difference between the first draft and the final version was incredible. I didn’t slam the guy because he was usually demanding of himself and had never let me down. But I had to give him a jolt.

Generals motivate their soldiers; they inspire them when it is necessary. They do the same for their highest-ranking officers. We all need a boost now and then. Learn how to tailor your method to the personalities you are managing.

Keep the big picture in mind while attending to the daily details. This can seem like a balancing act, but it is absolutely necessary for success in running a company.

In the 1980s, I was riding high. After learning the essentials of real estate development from my father, Fred, a builder in Queens and Brooklyn, I’d become a major player in Manhattan, developing Trump Tower, the Grand Hyatt Hotel, and many other top-tier properties. I had a yacht, a plane, a bestselling book.

One magazine headline said, EVERYTHING HE TOUCHES TURNS TO GOLD, and I believed it. I’d never known adversity. I went straight from Wharton to wealth. Even in down markets, I bought properties inexpensively and made a lot of money. I began to think it was easy.

In the late eighties, I lost focus. I’d fly off to Europe to attend fashion shows, and I wasn’t looking at the clothing. My lack of attention was killing my business.

Then, the real estate market crashed. I owed billions upon billions of dollars–$9.2 billion, to be exact. That’s nine billion, two hundred million dollars. I’ve told this story many times before, but it bears repeating: In the midst of the crash, I passed a beggar on the street and realized he was worth $9.2 billion more than I was. I saw a lot of my friends go bankrupt, never to be heard from again.

Stay Focused
The media had me for lunch. Forbes, BusinessWeek, Fortune, The Wall Street Journal, The New York Times–they all published major stories about my crisis, and a lot of people seemed to be happy about it.

I’ll never forget the worst moment. It was 3 A.M. Citibank phoned me at my home in Trump Tower. They wanted me to come over to their office immediately to negotiate new terms with some foreign banks–three of the ninety-nine banks to whom I owed billions. It’s tough when you have to tell a banker that you can’t pay interest. They tend not to like those words. An ally at Citibank suggested
that the best way for me to handle this difficult situation was to call the banks myself, and that’s exactly what they wanted me to do, at three o’clock on a cold January morning, in the freezing rain. There were no cabs, so I walked fifteen blocks to Citibank. By the time I got there, I was drenched.

That was the low point. There were thirty bankers sitting around a big table. I phoned one Japanese banker, then an Austrian banker, and then a third banker from a country I can no longer remember. In The Art of the Deal, I had warned readers never to personally guarantee anything. Well, I hadn’t followed my own advice. Of the $9.2 billion I owed, I’d personally guaranteed a billion dollars. I was a schmuck, but I was a lucky schmuck, and I wound up dealing with some understanding bankers who worked out a fair deal. After being the king of the eighties, I survived the early nineties, and by the mid-to-late nineties, I was thriving again.

But I learned my lesson. I work as hard today as I did when I was a young developer in the 1970s.

Don’t make the mistake I did. Stay focused.