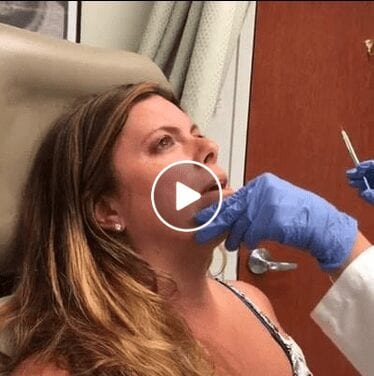 True story. I was sitting in my car a few hours ago, talking on the phone with the wife. She asked a question, and I didn’t respond. She followed with, “What’s wrong?”

It was one of the stranger sentences I’d uttered this week, and it was said with neither sarcasm nor derision. Donna is a former classmate of mine from Mahopac High School; a longtime friend and the owner of America’s best coffee shop, The Freight House Cafe. I don’t know why, but earlier today she went to the dermatologist to have a mole removed. While there she asked about Botox—then immediately made the decision to have the doctor insert a little something something in her forehead. She decided to take us along for the ride.

And here are my thoughts, having watched:

B. None of us need Botox. We are who we are. With age we wrinkle, we flap, we sag, we droop. Shit happens.

C. That said, I applaud Donna in a huge way. Not for the Botox, but for the video. It was real; it was raw; it was enlightening. There were no excuses made; no attempts to pass off awkwardness with humor. She decided to have some Botox done, and thought it’d be helpful to have others witness the process. I love how this move 100 percent eliminates the bullshit. There will be no, “Hmm, something looks different” comments; no “I know you had work done but I can’t say that aloud” silliness.

E. Again, I’m not in favor of Botox. Or plastic surgery. But if you’re gonna do it, be real.