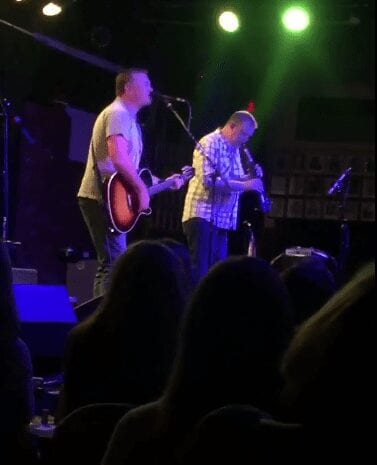 Approximately 16 years ago I brought my then-girlfriend, a short chick named Catherine, to the wedding of Daniel and Patrice Monaghan. The event was held at a vineyard on Long Island, and among the things I recall are a loving family, terrific food, smiling people, a $150-a-night motel with moldy door handles and—most important—“I Could Not Ask For More,” by Edwin McCain.

The song—a 1999 ballad written by Diane Warren—played midway through the reception, and as Catherine and I danced it just felt … special. Maybe that’s overly gooey and sentimental, but I pretty much knew the woman I was wobbling with would one day end up picking up my sweaty socks and listening to endless USFL stories.

The song mattered, and as we prepared for our 2002 wedding, the dizzying decisions and debates and family drama were sedated by the easiest of choices. We knew “I Could Not Ask For More” would accompany our first dance as a married couple. And it did.

Ever since the Monaghan wedding, Catherine and I have loved “I Could Not Ask For More.” Yes, it’s a sappy tune that has served as first dance-catnip for hundreds of thousands of about-to-be-wed couples. But it’s also easy on the ears, affectionate and well-intended. It’s a legitimately good song, and McCain did Warren’s work justice. That’s why, tonight, the wife and I plopped down $40 to catch McCain perform at The Coach House, a small venue in nearby San Juan Capistrano. Did we expect greatness? No. Did we expect 12 fantastic songs that would hold our interest for two hours? No. Did we expect vocal brilliance? No.

Simply put, we wanted to hear “I Could Not Ask For More.”

Edwin McCain played the song early on in the set, and—to be corny as all fuck—we could not ask for more (Glub. I can’t believe I just wrote that). He and his two musical partners (one on guitar, one on sax) nailed it, and we were giddy and satisfied.

What followed, however, was … um … eh … ah … eh—brilliant. Just brilliant. Or, to put it different: I’ve probably attended 150 concerts in my lifetime, and never have I heard a better vocal outputting than the one Edwin McCain unleashed this evening. I feel like, in many ways, “I Could Not Ask For More” has done the man great injustice. It sets him up as a wedding song crooner. Which, while fine, doesn’t tell the full story of a guy with a nuclear-charged voice, otherworldly vocal command, top-to-bottom range and a buffet of truly magnificent music. Oh, and McCain knows how to work a crowd. He was funny, quick-witted, sarcastic, occasionally biting. Although there were only about, oh, 300 of us in the building, he seemed genuinely honored to be playing at a historic Orange County venue. By now I’m sure McCain has told some of his stage stories 500 nights in a row. Yet he made it all feel fresh and original. That ain’t easy.

Not all that long ago, Catherine and I saw Hall & Oates perform at the nearby outdoor theater, and the show was short, uninspired, forced. Just lame. And with that, a bit of my excitement for live music took a hit.

He gave us more.

Best night for @jeffpearlman and I hearing @TheEdwinMcCain sing our wedding song. Thanks for a great night pic.twitter.com/au851XpAhJ