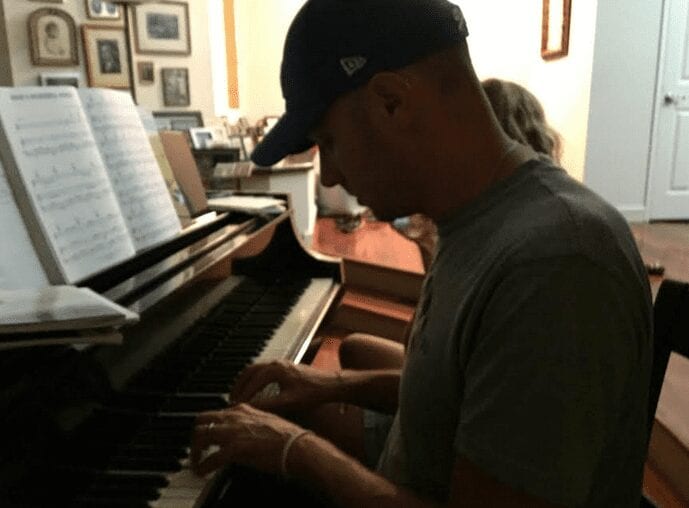 Way back in 2003, shortly before my daughter was born, I bought a guitar and started taking lessons. My instructor was an 18-year-old high school kid who lived about a mile away. I think I paid him $40 a week and—after a bunch of months—I could play a semi-incompetent version of “Signs” by Five Man Electrical Band.

My goal, of course, was to be the cool guy in his 30s who jammed on the guitar. I pictured myself in the corner of a coffee shop, a hot drink on a table to the side, steam gently blowing in the air as I impressively strum away “Hard Luck Woman” and “Desperado.” Maybe I’d even join a laid-back band; sorta like the final segment in the seen-by-absolutely-nobody 2001 Wahlberg/Anniston film, “Rock Star.”

Casey was born on July 31, 2003, and with her arrival my morphing into Eric Clapton ceased. The guitar gathered dust, the note-covered pages yellowed and I remained as musically inclined as a deaf napkin holder. Hell, I can barely clap to the beat of “We’ve Got the Beat.” It’s that bad.

Meanwhile, for the past six years Casey has been learning piano. It’s one of the absolute joys of my life—lying on the nearby couch as she plays any number of songs. One day, when I’m old and drifting away, odds are the final sounds I’ll hear are my little girl’s long-ago piano notes. I truly don’t care if she’s great or good or terrible. Nah, I simply get a kick out of hearing her create.

I also, for that matter, get a little jealous. I want to be musical. I really, really, really do. I want to sing and play and be the life of the party. Hence, last week—13 years after my last guitar lesson with a teacher who’s now (egad) in his 30s—I returned from the acoustically dead and signed up for my own piano lessons. The teacher’s name is Giana; she comes every Monday at 4 o’clock to instruct Casey, and agreed to return at 5:30 for my turn.

The debut was, um, rough. Back in the day I used to suffer from some pretty awful health anxiety, and while that hasn’t reared its head in five or six years, as soon as Giana sat at the piano I was overcome by jarring panic. It began with sweat. Armpits. Back. Neck. Then my head started to spin—Giana spoke, I nodded, but absorbed nothing. She showed me some beginning stuff, and I kept stumbling over the easiest of morsels. The keys go in order—A, B, C, D, E, F, G. Yet, somehow, that basic fact eluded me. It was mortifying, and the more I bumbled the more I felt like a dolt. To her credit, Giana was cool and laid-back, and left me with some basic concepts to work on.

What followed was, well, delightful. I practiced every day, and loved it. As a longtime sports writer, I used one of my old mind-word tricks to make things easier. F and G were no longer F and G—they were Colts halfback Frank Gore. A and B turned to former Saints quarterback Aaron Brooks. C, D, E now stands for Clyde Drexler Explodes. It’s pretty much the same way I remember numbers (82,315 is Yogi Berra, Don Mattingly, George Foster, for example), and when Giana returned I was ready. Not brilliant, mind you. Or even particularly competent. But more relaxed, more at ease, more prepared.

I’m only two lessons in, but I’m absolutely loving the experience. My brain doesn’t think in these ways. It feels like I’m learning a new language—which I dig.

Best of all, I’m actually proud of myself.

And, I’m quite certain, Frank Gore and Aaron Brooks are proud, too.