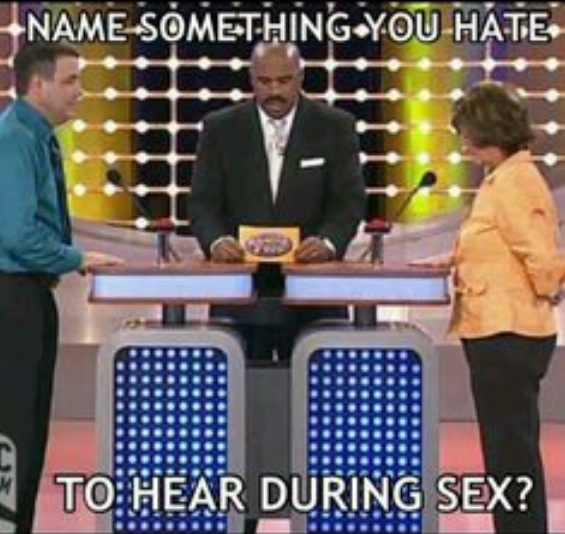 Back when I was a kid, The Family Feud was a Pearlman household staple. At the time it was wildly popular; the biggest game show in the era of big game shows.

If you’ve never seen the Feud, it’s basically a trivia contest pitting two families against one another. In the late-1970s and early-80s, the host and star was a man named Richard Dawson. Ol’ Dick was extraordinarily good at his job. He has this flowy way about him; glided from contestant to contestant. He was charming and smooth and (gasp) more than a tad bit horny. Dawson’s trademark, if he had one, was the kissing of female contestants. It was rarely a mere peck on the cheek. Nope, the dude was straight-up gangsta flirty, and if Dawson didn’t get laid backstage from time to time, well, I’d be shocked.

Anyhow, Dawson left the show in 1985 (he returned briefly in the mid-90s), and Family Feud sorta faded off. There were other hosts, other sets. But it was never quite the same.

Beginning in 2010, Steve Harvey, a legitimately funny comedian/actor, became the face of Family Feud. This meant little to me, because—frankly—I didn’t care. I barely watch TV as it is. I sure as hell wasn’t scheduling time for a game show.

Alas, a few months back my kids saw the Family Feud listed on the Game Show Network programing, and asked whether we could watch. Thinking back to the old days, I agreed. We flipped to the channel and there was the Feud. It felt like the 1980s all over again, and I was happy. The questions were innocent; along the lines of NAME SOMETHING YOU BRING TO THE DOCTOR’S OFFICE and WHAT’S A FRUIT THAT PEOPLE HATE.

Then, however, the questions got a bit funky. Mixed in with the normal stuff were inquiries like THINGS PEOPLE SAY WHEN THEY’RE MAKING LOVE and TOP FIVE THINGS THAT TURN A MAN ON and THINGS YOU LIKE TO HEAR DURING SEX. I let it slide as first, but then—whenever we’d watch—I found myself having to change the channel for certain questions. It’s not that I’m a prude. My kids listen to Tupac; hear my curse; have seen R movies. But the Feud was just getting … weird.

Tonight, it all ended. We were watching, and Steve Harvey says: WE HAVE THE TIP 6 ANSWERS ON THE BOARD. NAME SOMETHING A WIFE MIGHT BUY TO PUT ON A STRIP SHOW FOR HER HUSBAND AT HOME …