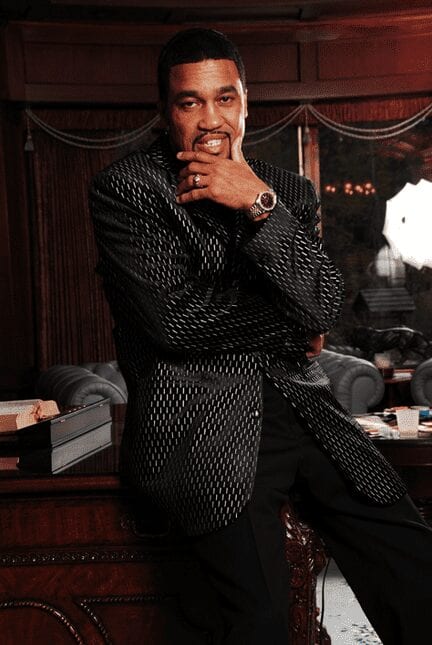 The man pictured above is Darrell Scott, the senior pastor of the New Spirit Revival Center Ministries, Inc. in Cleveland.

He is my least-favorite genre of Homo sapien.

Now, one might read that and think I dislike men of the cloth, or men from Cleveland, or men whose official website photographs look like they’re trying to pick ladies up at a supper club. But, truly, that wouldn’t be the case.

No, Darrell Scott is my last-favorite genre of Homo sapien because he is full of shit. What better way to describe a religious leader who not only tells his followers how to vote, but tells them over and over again, using the power of his presumed religious knowledge to influence the pliable and uninformed? You see, whether a priest or rabbi or minister or pastor loves a candidate or hates a candidate, it is not his/her job to instruct them which person to vote for. Why? Because—with very, very, very rare exception—they can’t possibly know enough. For example, I have no trouble with a priest (in following the instructions of the Catholic doctrine) reminding parishioners that the church stands against abortion, and does not believe gays should be allowed to marry (to be clear, I agree with neither position). But while Donald Trump might be pro-life and Hillary Clinton pro-choice, the clergy can’t possibly know the candidates’ standings on every position. Or the candidates’ history on every position. Their voting records. What they truly believe, v. what they say. Just as it’s impossible to look inside a person’s heart, it’s impossible for a religious leader to know enough about the full range of a candidate that he/she can say, “This is the person you need to vote for!” It just doesn’t work. Can you remind your followers what positions are important to the church? Yes. Can you know—without question—with politician will best stand up for your entire belief system? No.

But, wait. I’m veering off topic.

I’d never heard of Darrell Scott until yesterday, when somehow I was directed to his Twitter stream—which is pretty much one anti-Hillary Clinton rant after another. It’s also clear Darrell Scott loves Donald Trump, which struck me as odd because …

• 1. Donald Trump has devoted most of his life to being a greedy sack of shit—a way of living that doesn’t seem to roll with general religious dogma.

• 2. Donald Trump has been married three times, and has bragged about his infidelity—a way of living that doesn’t seem to roll with general religious dogma.

Though there are more, those are my Big 3. So, after seeing this Tweet …

… I hit up Scott and asked why he would Tweet something that wasn’t true. I mean, there are certainly plenty of things out there to use as hammers against Hillary Clinton. But the whole “She started the birther thing against Obama” has been debunked repeatedly. Literally, over and over again.

So I asked. And he responded …

And what he said is simply untrue. Like, 100-percent untrue. Which, again, is just lazy as lazy can be—because there are, undeniable, a solid 50 attack lines against Hillary Clinton that are at least somewhat truthful. But Scott is, at least on Twitter, a lazy sack of shit. Hell, just Google the man. He’s wrong ALL the time. And by “wrong,” I don’t mean wrong to back one candidate over another. I mean “wrong,” as in he keeps messing up facts in order to support a case that makes little sense. Which is embarrassing, right? Because he’s a pastor—and if there is anyone we should expect decency and honor from, it’s our clergy.

Then, however, I looked up Darrell Scott. And I’m not entirely sure how he’s a pastor, or if he really is one at all. The man practices something called the “prosperity gospel,” a theory of absolute nonsense greed that says, more or less, the people in God’s favor will enjoy material wealth on earth. In other words, believe in a higher power and you’ll land cars, mansions, Rolexes—just like Darrell Scott. He also brags of having a doctorate—but never says where said doctorate was attained. He also brags of touching millions of people—yet he has nearly 40,000 fewer Twitter followers than a lame sports book writer. He also brags of “his godly interpretation and knowledge of the Bible proclaims a message of hope, deliverance, salvation, and restoration”—yet he has not merely ostracized gays, but branded them everything short of worthy of death.

In short, he’s awful. And the idea what anyone takes his shit seriously pains my soul.

On the down side, he has a voice.

On the bright side, he’s blocked me on Twitter.