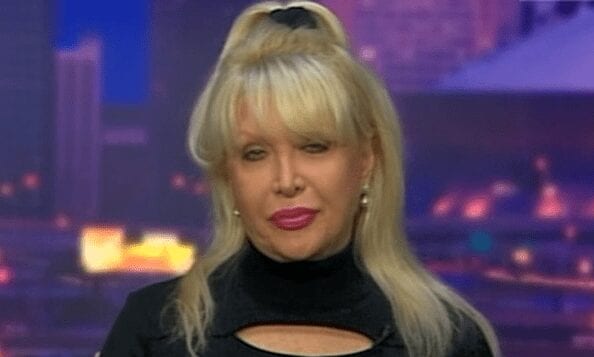 Gennifer Flowers is allegedly attending Monday’s debate as a guest of Donald Trump.

This is a potential gift for Hillary Clinton.

If I’m her, I’m hoping a moderator asks Trump about it; throws something like, “You’ve been accused of not having much taste in this election. For example, you invited Gennifer Flowers here and …” He’ll reply, and then she’ll get her shot.

And this is exactly what she should say …

“You know, this is not something I have discussed very much in a public forum, and for obvious reasons. But here we are, and it’s been thrown in my face by a man with a hollow heart. This is, truly, how it works with Donald Trump. That’s been made obvious by now. He’s a bully. The class bully. He finds something about you—something he wants to expose, whether it’s true or not, whether it will cause great heartache or not—and he goes after it. He accused Ted Cruz’ father of being involved in the JFK assassination. He said John McCain—who spent four years in a Vietnamese prison camp—wasn’t a hero because he was captured. Again, this is what the bully does.

“So, yes, I see Gennifer Flowers here, and I know Mr. Trump invited her. And I am humiliated. That’s the word for it. Humiliation. I was cheated on by my husband, and for years I’ve had to live with that. Many people watching know what that’s like. It’s painful. It’s horrifying. You question yourself; your worth; your pride. And that’s when it happens in the privacy of your own home. Now imagine having millions of people discussing it; looking at you and snickering, and judging, and mocking. So, yes, it’s been humiliating, and it took e-v-e-r-y-t-h-i-n-g I had to forgive my husband. Everything. And I still struggle with it. But that’s love, isn’t it? When you care about someone so much that—even when others fail to understand; even when your soul has been crushed—you stand by him; you forgive.

“Donald, you brought Gennifer Flowers here to hurt me, and it has worked. It’s painful. But it also speaks to who you are, sir. It speaks to a man’s character; to his sense of empathy; to his core decency. You, yourself, have bragged about your own marital infidelity. That means the same pain you mock me with, you have inflicted upon others. So, truly, I hope people see this for what it is. And, on behalf of women who have been cheated on by their spouses, I say shame on you.