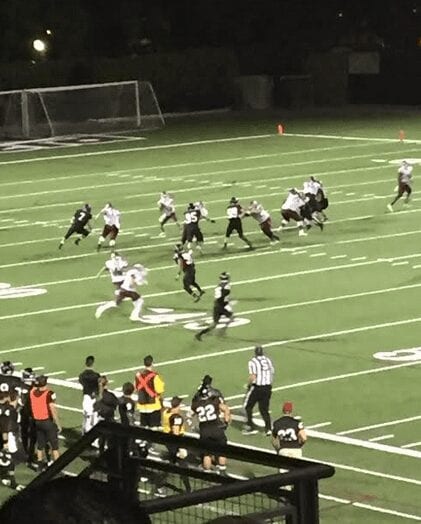 So the son and I had a tough decision to make yesterday. We could attend one of two college football games:

Trinity v. Chapman at … um, whatever Chapman’s field is called.

I asked the boy. He’s 9, and digs our sports outings.

“Whatever you want,” he said.

“No,” I said. “It’s your call. Stanford and UCLA is a big game at an awesome stadium [we’d gone once before]. But Chapman is closer, and we’ve never been there.”

Tickets to the UCLA game would have been about $45 a pop on StubHub. Tickets to Trinity-Chapman were $15 total—$10 for me, $5 for him. We sat along the 30 yard line. There was a giant Panther mascot roaming around. The cheerleaders were peppy, the, oh, 700 fans in attendance enthusiastic.

Once the game started, we could have been at DI. Or DII. Or even the NFL. But we were at DIII. And it mattered not. Football is football, and talent is relative. We’d never heard of Trinity, but the team featured a 5-foot-7 quarterback named Austin Grauer, who bobbed and weaved and reminded me of a small-scale Doug Flutie. They had a workhorse halfback named Evan McDowell who could certainly play at a higher level. They had a vocal sideline and a coach, Jerheme Urban, who’d spent a decade in the NFL.

Chapman, meanwhile, played a ferocious brand of defense. They have a bunch of defensive linemen who look like fireplugs, and a couple of genuinely impressive defensive backs.

Division III is funny. And, in many ways, joyful. Kickers are as inconsistent as the Toledo weather report. Quarterbacks often possess singular skills, or certain warts. Chapman had a kid with Brett Favre’s arm strength and the accuracy of a blind leapfrog. Everyone plays hard, because they love the game. But deficits abound. Size deficits. Speed deficits. Somehow, it all combines to bring forth a really fun show.

So, no, we didn’t catch the big game at the Rose Bowl.

But we still felt the warmth.