The quirkiness of life 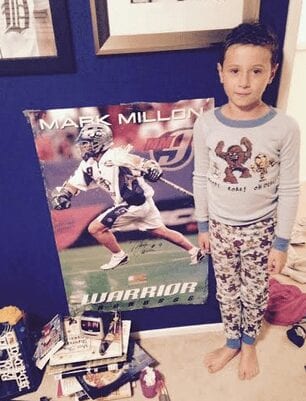 About, oh, seven years ago, our across-the-street neighbors moved from their house in New Rochelle, N.Y. to San Diego, It was an interesting family of four—two brothers, a best friend and a woman named Carmen. My wife used to call them, “Three men and a little lady.” They  could not have been more lovely, and we were sad to see them depart.

Anyhow, it was a weird relocation, in that they left most everything behind. About two weeks after the foursome bolted, a huge sale was held inside the house. We were away for most of it, but rummaged through the remains on the final day. We bought a big drum and a painting. While peeking here and there, I came across a rolled-up thing of paper. I removed the rubber band and uncovered what turned out to be (oddly, randomly, inexplicably) an autographed poster of a professional lacrosse player named Mark Millon.

Our son Emmett was 2 or 3 at the time, and I thought the poster would be a cool addition to his wall. So I asked the woman who ran the sale how much the treasured print was selling for. “Ah,” she said, “just take it.”

Anyhow, about two years ago I did a Quaz Q&A with Mark, primarily because of the poster. I mean, I had no idea who he was until that day in the neighbors’ largely abandoned house. He was terrific and cool and agreeable, and I was happy such an upstanding guy was a part of Emmett’s world.

A few weeks ago Jonathan Powell, one of my closest friends dating back to childhood, asked if I knew Mark Millon. I said I did—and he wondered if I could possibly make an introduction. Powell is involved in the Maryland younth lacrosse scene, his kids play, he wanted some advice. So I reached out to Mark, gave him Powell’s number … and they had breakfast.

All because my neighbors moved to San Diego.

PrevPreviousThe death of nostalgia
NextThis has been shared on Facebook 23,258 times …Next