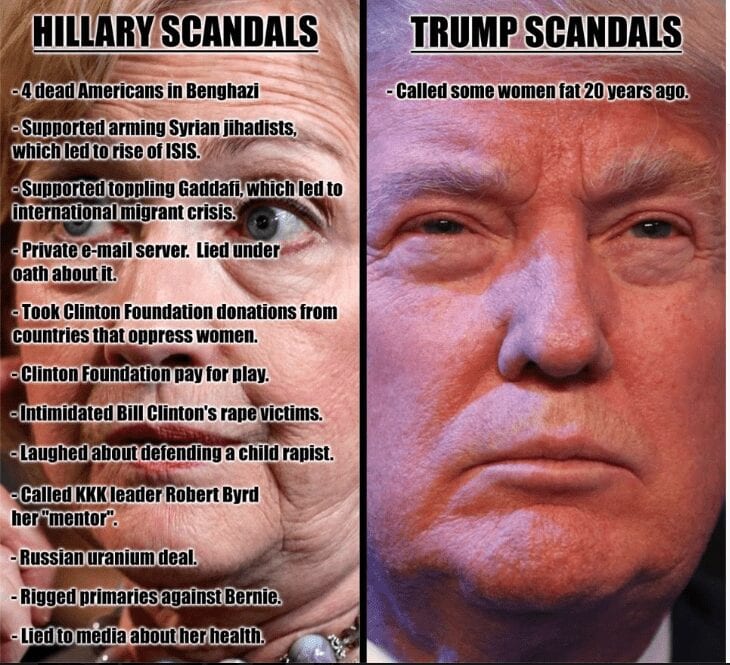 … and it perfectly speaks to the stupidity of a large chunk of America. Or, perhaps, the simplicity. And I’m not even going right v. left here, or Trump v. Clinton. I’m referring to this new, wacky thing our people do, which is ignore legitimate news outlets in favor of Facebook and Twitter postings and memes and the like.

We believe them, without double checking, because our brains are small and busy. And, truly, why confirm facts then the words before you support the very ideas you forcefully express.

So, yes, it must be asked—why is the media so heavily focused upon Donald Trump, when Hillary Clinton has soooooooooooo many scandals? Like, for example, the four dead people in Benghazi. Which, um, isn’t really a scandal, but an example of (one could say) poor judgement or misunderstanding the pressing severity of a situation. Of course, something that isn’t a scandal becomes a scandal when we want it to be a scandal. Therefore, supporting the arming of Syrian jihadists is a scandal, because it formed ISIS. Even if, ahem, the information simply is not true. But, wait, that’s OK—because Hillary’s “mentor” was KKK LEADER Robert Byrd! Holy shitballs—what a fucking huge scandal! Oh … wait. Robert Byrd, indeed a Klansman, hadn’t been in the KKK for decades when Hillary first met him; and he denounced everything the group stood for; and he wound up fighting h-a-r-d for civil rights. But … scandal! Yes, scandal!

You know what else is a scandal? Hillary laughing as she freed a child rapist!!! Oh … not true. Well, what about the Russian uranium deal? Also false. Ah ha! Well how about …

Here’s the truth: Hillary Clinton is a flawed political candidate. No doubt. The e-mail server? Fair game. Questioning the role of the Clinton Foundation? OK. But when we exaggerate, lie, create “scandals” that aren’t scandals, we reduce ourselves to moronity—which isn’t even a real word.