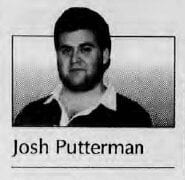 I was reminded of something that happened to me from early in my life, and I want to share.

Before my freshman year at the University of Delaware, I attended an orientation session and met with an adviser for first-year students. Her name was Jama. I sat down across from her at a desk. She asked what I wanted to do in my time at college, and I said I planned on becoming editor of the student newspaper.

She informed me that the paper was very good and very competitive; that not just anyone gets to write for it; that freshman aren’t allowed.

It turns out Jama had dated The Review’s outgoing executive editor, and—well before I even stepped foot into the office—the staffers were warned of this arrogant dip-shit freshman who thought he was the man. That said, I’d interned the previous summer at my local town weekly, and came with clips. So the sports editor let me cover some games; write a handful of profiles. And I was (spoiler alert) a dick. Cocky, arrogant, insufferable. I complained about every word change; every paragraph adjustment. It was brutal, only I was too blind to see.

One day, I was pulled aside by Josh Putterman, a managing editor at The Review. We sat down and he told me I was no longer wanted. Josh was nice about it, but firm. The staff was tired of my attitude, and I would no longer be allowed to write for the paper.

I returned to my dorm room and cried.

I would have to transfer. I knew I’d have to transfer. Journalism was my dream, and I’d been banished. This plagued me for days … weeks. Finally, I sat down and wrote a letter of apology to the staff. I promised, if given another chance, that I would be on my best behavior. Josh called—the note was well-received; I could return.

I’m not sure of the point here. Cockiness sucks? Yes. I never transferred? Sure. But really, what sticks in the cranium’s eye is Josh Putterman telling me I was a goner, then telling me I was, once again, a comer.

And always doing so with kindness and decency.