Merry Christmas from the Dailey Family … 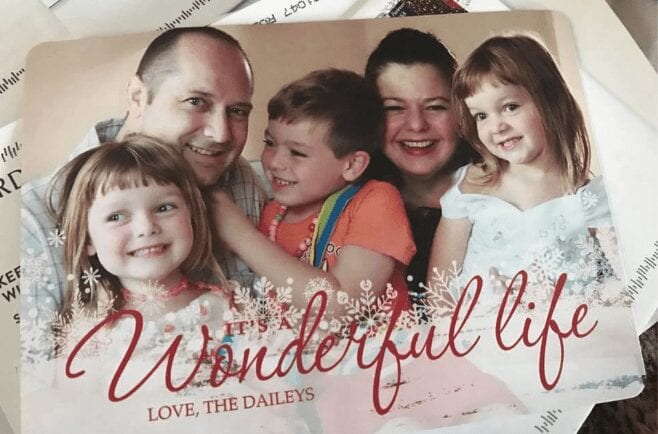 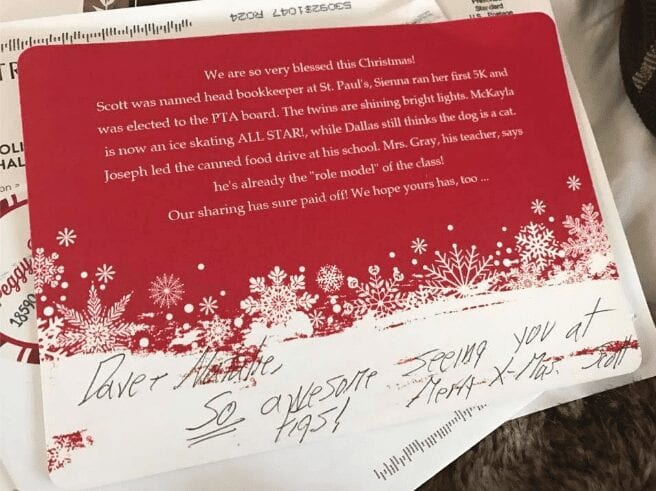 If you’ve read this blog for more than a year, you know that the Pearlman Family has a holiday tradition that kicks ass.

It commenced five or six years ago. We were at a friend’s house, and his holiday cards were piled on a table. I looked through them, and spotted one of a couple with their dog. “Can I have this?” I said.

That night, I placed the card in an envelope and had someone else write Leah’s address on the envelope. I stuck a stamp, dropped it in the slot—and sorta forgot about it.

One week later, we’re on our annual family ski trip. It’s cold as hell, and I’m miserable. “The weirdest thing happened to me,” she says.

“I got this card in the mail, from Jim and Julie Stanley. I have no idea who these people are. I Googled them, I looked through my contacts. It’s them with a dog. They wrote something about ‘Hope to see me soon …’”

The wife is sitting next to me. She is bursting at the seams. She r-e-a-l-l-y wants to laugh. I nudge her in the ribs.

Eventually, against my will, the wife tells her.

Anyhow, that was the beginning. The following Christmas I fired off more recycled cards, to great returns. However, the wife rightly thought it sorta mean to take one person’s card and send it elsewhere. I agreed—so last year, the kids and I made our own card. We found a family photograph online, downloaded it to Costco’s card-making site and shipped it to 30 or so of our closest friends and family. The results, which you can read about here, kicked ass.

This year’s card features the Daileys—Scott, Sienna, McKayla, Dallas and Joseph. Scott Dailey is actually a the name of a friend who worked with me at the college newspaper. Sienna is the woman, because she looks like a happy Sienna. My son, Emmett, and I were sitting in the Barnes & Noble cafe, and I gave him the task of naming the daughters. “McKayla,” he said. “Because a girl on a Christmas card would be named McKayla.” I nudged her sister toward “Dallas,” since it just seems like McKayla’s sister would be Dallas. The boy, Joseph, is in honor of Joseph Kuppinger, a family friend.

I also spent $7 to send the completed cards—sealed and stamped—to a friend in New Jersey, thereby assuring the postmark wouldn’t reveal California.

The text is key. A few thoughts:

• Cliched-yet-warm buzzwords are vital. “Blessed” and “so very” are money holiday card terms.

• I’ve learned from my mother’s e-mail how to CAPITALIZE FOR NO REASON and “place things” in quotes irrationally. There’s also! Exclamations!! For no good reason!!!

• You need to have some feelings of accomplishment over little things. Joe is the “role model” of the class. Sienna on the PTA board. I’m actually not saying this snidely—these are the accomplishments that keep is going and make tough times digestible and bearable. I love them.

The response has been, as always, killer. I tried sending this year’s card to people who didn’t receive last year’s card. One exception was my wife’s 97-year-old grandma, who left me a joyful, “You can’t fool me twice!” message that warmed my heart. Mostly, there was a whole lot of this … 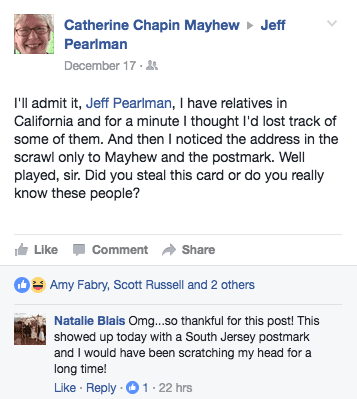 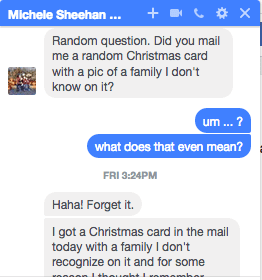 The best—absolute best—came two days ago. I sent the card to a bunch of our neighbors here in California. There’s this kick-ass family three houses down, and they’re really funny and cool. So I mailed them the card, and they were at our house for a neighborhood holiday gala. I pulled their college-aged daughter aside and said, “This is gonna sound weird, but I have to ask you a question, between us. OK?”

“Holy shit,” she said. “That card has been driving my mom crazy! Holy, holy—that is soooooo awesome.”

Moments later, with her parents in the room, I complained about getting cards from people I don’t recognize. The mom, Lisa, said, “That JUST happened to us! I have no idea who the people are, and it’s really getting to me.” On and on and on. I look at my wife, and she’s trying not to crack up.

Later, I confessed to Lisa.

“Are you shitting me?” she said.

PrevPreviousI needed this
NextThe blockbuster trade that I completely misunderstoodNext