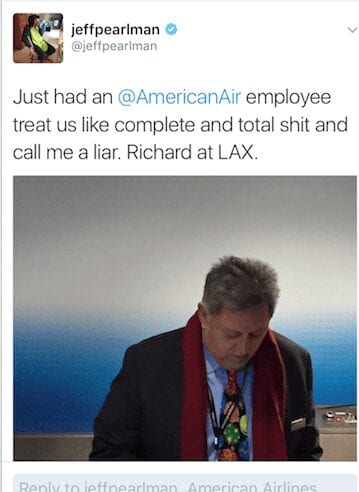 So, for the first time ever, my kids are flying by themselves. They’re 10 and 13, therefore it’s completely age appropriate. But I’m nervous. The flight from Los Angeles to Miami is 4 1/2 hours, and there are all these papers that need to be filled out when it comes to unaccompanied minors, etc … etc.

We woke at 5:30 this morning, left the house at 6. The drive from where we live to LAX is an hour, and the kids were scheduled for an 8:55 am departure. We didn’t have to stop for food or gas; didn’t park a car off site. So, it seemed fine.

The American terminal was a complete zoo. We were directed toward one line, which was occupied by, literally, hundreds upon hundreds of people. Then I told someone my kids were flying unaccompanied, and she steered us to the line for—I kid you not—unaccompanied children and folks with pets. It was long and the desk were understaffed. With about, oh, 70 minutes until takeoff, I asked a woman whether my kids would make it. “They’re flying by themselves,” I said with a parent’s (legitimate) urgency.

She said, “Wait here,” and went off to get her supervisor—Richard.

Richard was a man with a salt-and-pepper hair and red scarf. The woman (who was lovely) told him, “This man has two unaccompanied children flying, and he’s afraid they won’t make their flight …”

Richard refused to look at me. Literally, he did not gaze my way. He turned his back and began to help others.

Richard ignored us. Deliberately. He walked away—and I followed. “Richard,” I said. “Look, my kids have an 8:55 flight and …”

“They’re gonna have to get put on a later one,” he said, still not looking at me.

“That doesn’t make any sense,” I said.

“We’ve got here two hours before takeoff,” I replied.

“If you’d been here two hours, you’d be at the gate already,” I said.

“We were put on the wrong line at first,” I said.

Still, nary a gaze my way. He’s walking away, and I’m following. My kids, nearby, are dumbfounded. “You haven’t been here two hours,” he says.

“Are you saying I’m lying?” I reply. “We were on the wrong friggin’ line!”

The airport is a madhouse. Mayhem. I feel for the employees—I truly do. And I loathe making life hard for people. Ask my wife and kids … it’s probably my No. 1 civic redundancy—don’t make another human being’s existence harder. But Richard … fucking Richard. He. Can’t. Be. A. Bigger. Dick. At. This. Moment.

But then I look back at my children, and the line is actually starting to move. I ditch Richard and join them. We reach the front, approach the agent. And we’re blessed—absolutely blessed—with this man … 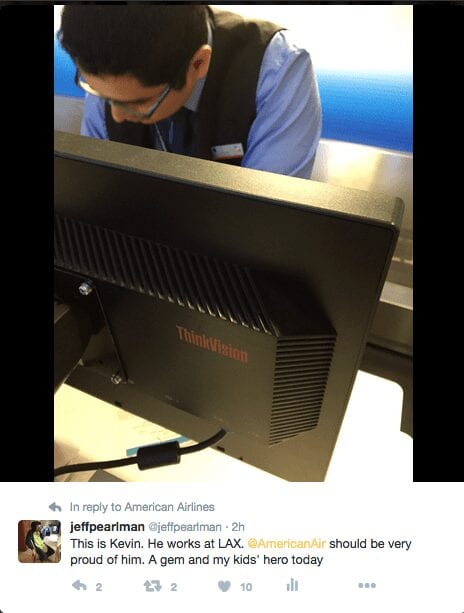 He’s Kevin. He’s placed in the thankless position of checking in kids and dogs. It’s the worst gig on the worst travel day. And he’s … amazing. He checks us in quickly, then leaves this position to walk us to security. He guides us past a line, explains to the TSA checker that it’s a rush. I can’t overstate how wonderful the guy is, and if there’s justice in the world he’ll be the new Richard, and Richard will be placed in charge of pet residue.

Anyhow, we make it through security. I’m actually communicating back and forth with American via Twitter DM, and they’re terrific and reassuring. But the gate is faaaaaaar away. So me, my 13-year-old daughter and my 10-year-old son book it. I flip off my sandals and I start to gallop, barefoot, through the terminal. Emmett is in the front, showing off his seven-minute mile form. Casey trails closely—two years of water polo fitness paying off big time.

We arrive at the gate. There’s time to spare. We buy a water and some gummy bears.