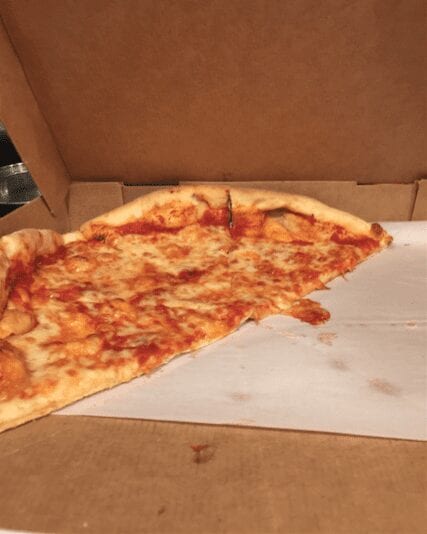 The above photo was texted to me via Matt Walker, a longtime pal who grew up about six houses down (and across) from where I lived in Mahopac, N.Y.

Were I on death row, offered a final meal, I’d send the guard to Cacciatore. “Grab some slices for yourself,” I’d add. “Trust me.”

I bring this up because, a few nights ago, I ordered pizza at a local place called, literally, “New York Pizza.” I entered to pick up the pie and was greeted by (egad) this …

Look twice. That’s quasi-pizza, sitting beneath a heat lamp. The cheese looks plastic. The meat hardened. There is barely any crust—and even that looks as if it were glooped out of some Pillsbury canister. And here’s the kicker—the place doesn’t sell pizza by the slice. It’s called NEW YORK PIZZA … and one can’t purchase slices?!

Anyhow, I love California. I love the sun, the palm trees, the Mexican food, the sushi, the beaches, the warmth, the coastlines.

But can a brotha get some Cacciatore? Please …

PrevPreviousWhen your icons begin to die
NextYou peed on the toiletNext