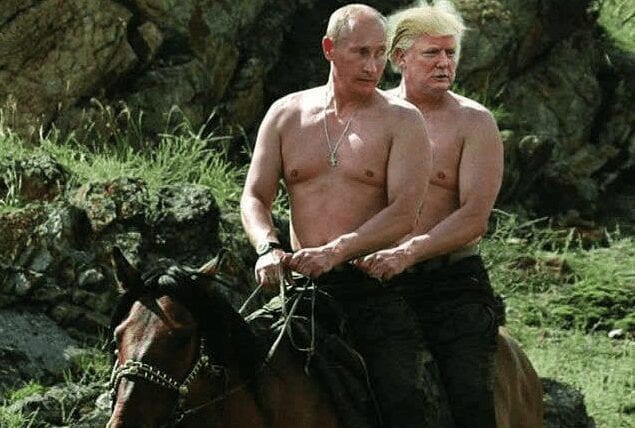 There was a time, not all that long ago, when Republicans were known as the political party of hawks and hardcore nationalists.

Their take was pretty universal among far-right loyalists: America first. Fuck Iran. Fuck Russia. Fuck any nation that wants to mess with us. We are the United States, and we will never cower before or cater to a hostile adversary.

And while I hated the Cheney-esque philosophy, I at least understood it. There were doves. There were hawks. If you were a dove, you saw peace as the ultimate goal. If you were a hawk, you saw peace as the ultimate goal, but it hard to come via a fist. I suppose you could make arguments for both approaches. In fact, people have spent decades making arguments for both approaches. It’s the American way.

Lately, however, something has changed, and it behooves me to ask Donald Trump’s supporters to take a lengthy gaze in the mirror and ask: Am I sincere, or am I full of shit?

See, lately Donald Trump has been playing this really weird, really awkward game of footsie with Vlad Putin. Even though the CIA—and the vast majority of Democratic and Republican officeholders—are certain Russia both spied on us and set out to fuck with our election, Trump has said we need to “move on” and get over it. When President Obama smacked down sanctions against Russia (again, supported by the vast majority of Democratic and Republican officeholders), Trump offered zero support. Then, when Putin said he would not reciprocate, Trump Tweeted out this …

This gem was re-Tweeted 26,000 times and liked 70,000 times—so, again, I’d like Trump’s supporters to stand in front of the nearest mirror and ask this: Had Hillary Clinton won the election, and had the CIA provided the same information about Russia trying to fix it on her behalf, what would you be saying? Seriously. What. Would. You. Be. Saying? Would you argue, “Hey, there’s no proof”? Would you be OK with it? What if Hillary then Tweeted out her love for Putin? How would that go over? Because remember, when Barack Obama ran against John McCain, and said he would be willing to speak with Iran, y’all killed him. Absolutely killed him. So, tell me, how is this different? How is this kosher?

Or are you merely being swayed by a conman way over his head?