It started with a Tweet: How I constructed the Tupac-Long Beach Poly story 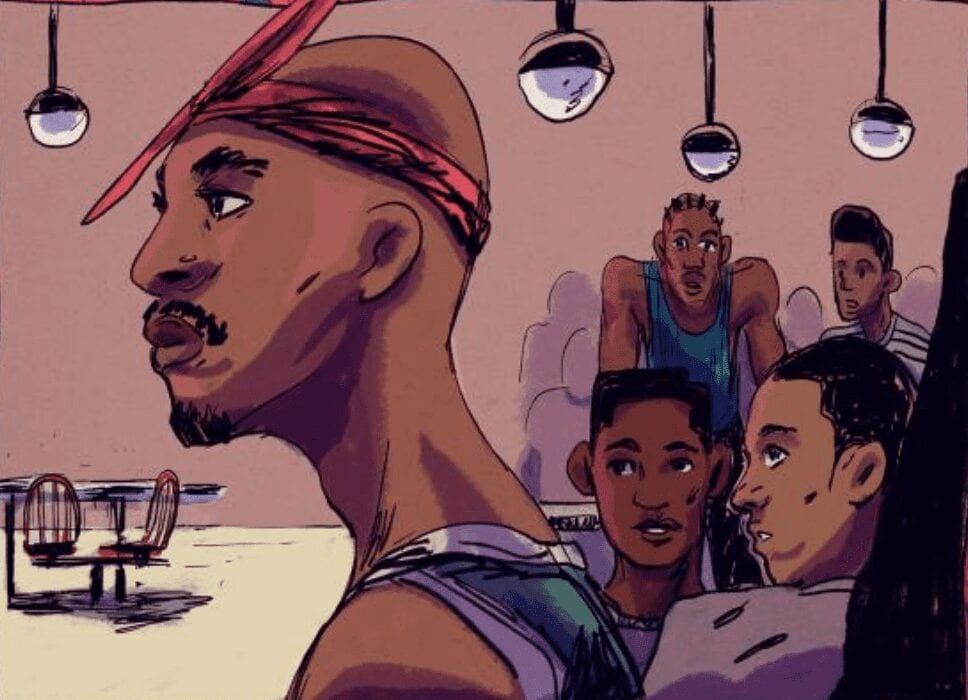 In case you missed this, I wrote a story for Bleacher Report that appears today. It concerns a 1996 encounter between Tupac Shakur and the Long Beach Poly football team. Headline: TUPAC, GLOCKS AND IN-N-OUT.

• It took place at the In-N-Out Burger in Barstow, California.

• Long Beach Poly was returning home after a miserable night-before loss to a team in Las Vegas.

• Tupac was driving to the Bruce Seldon-Mike Tyson fight in Las Vegas.

• Tupac was shot later that night.

Now … where to begin? 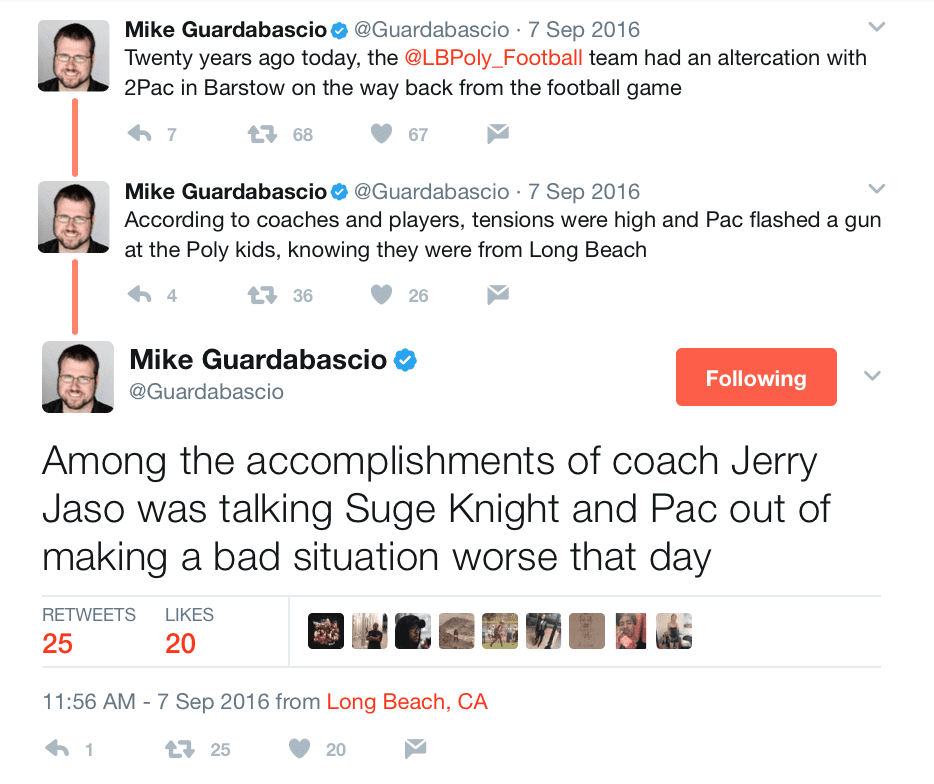 Last September Mike Guardabascio, an excellent writer for the Press-Telegram in Long Beach, fired off the above series of Tweets. I wasn’t a follower of Mike at the time, but apparently an editor at Bleacher Report was—because I was sent a screen shot of Mike’s thoughts with an e-mail that read, “This interest you?”

Why? First, because I love Tupac. Like, love, love, love Tupac. Were I to make a list of my top-five all-time favorite musical artists, it would read: 1. Hall & Oates; 2. A Tribe Called Quest; 3. Tupac; 4. MC White Owl; 5. Dixie Chicks. Second, because I’d been toying with the idea of making my next book a Tupac Shakur biography. So this was right in my wheelhouse. Third, well, because it simply sounded like a cool-yet-challenging piece. Was it true? Was it fiction? Besides the contents of Mike’s Tweets, I had no idea.

The fun is in the dig.

Things started slowly. I paid for a yearbooks.com subscription, found a team photo of the 1996 Long Beach Poly football squad and, one by one, began tracking down players and coaches. This, truly, is the beauty of social media. A whole slew of the guys are either on Twitter or Facebook (or both), and five (Marques Anderson, Larry Croom, Samie Parker, Ken-Yon Rambo and Darrell Rideaux) played in the NFL.

(Wait, pause for a moment. I attended Mahopac High School in upstate New York. The school has been around for nearly a century, and produced a single NFLer—Dave Taub, who was cut in training camp by the Eagles and Rams. Long Beach Poly had five future pros in 1996 alone. That’s batshit insane.)

Anyhow, save for Anderson the NFL guys all spoke, and they were magnificent. The crown jewel was Rideaux, who had worked in sports media and possesses an elephantine memory for details and, specifically, the details of September 7, 1996. He laid out a precise timeline of what happened, and also guided me toward the necessary participants of the In-N-Out encounter. This is not a criticism of Mike’s Tweets (like, not even a slight criticism), but what he heard was, largely, incorrect. Yes, Tupac had a confrontation with the football team. Yes, it happened in Barstow. No, Tupac didn’t flash a gun and no, Jerry Jaso, the head coach, didn’t save the day. The confrontation lasted all of four or five minutes, involved Tupac and Suge Knight and was, well, riveting. Again, here’s a link to the story.

I wanted to make this one good. So, among other things, I dined with Jerry (the head coach) in Huntington Beach; I interviewed, oh, 20 members of the team (players and coaches); I purchased Mike’s book on the history of Long Beach football; I spoke with the investigator of the case and snagged a comment from Death Row’s head of security; I visited the Long Beach Poly campus and knocked on the door of a former player who, I was initially told, was first to approach Tupac (he was a nice guy who said there had been a mistake. He drove home from Vegas with his parents); I had a long discussion with Reggie Williams of Ambrosia for Heads about Tupac’s legacy, and also checked in with Kevin Powell, America’s foremost Tupac Shakur historian.

One of the final pieces was driving out to Barstow to take a gander.

Now, why would I make that trip, 21 years after an incident took place? Well, multiple reasons. First, because I always like setting the scene, or at least having the meat and potatoes to set a scene. Second, because I wanted to know more about Barstow. I wound up visiting the town museum, interviewing a couple of local historians, taking a guided tour around town, chatting with ESPN’s Paul Gutierrez, my longtime friend and one of Barstow’s favorite sons. (Paul saw via Twitter that I was in his old turf and texted, “What the hell are you doing in Barstow?”) Third, because—why not? Part of the absolute thrill of this job is the opportunity to see new places, experience different things. I wanted to go to Barstow because I’d never been to Barstow. So I hit up in In-N-Out, counted the tables and chairs, interviewed an employee, hit up the outlet mall and spoke with a security guard as he smoked his Marlboro. Journalism isn’t a desk job, dammit.

Anyhow, it was a ridiculously enriching experience. There are lots of things I love about being a journalism, but topping the list would be finding a sliver of lost time and breaking it down.

I hope you enjoy the result.

PS: It sorta gets lost in the narrative (my bad), but general retellings of Tupac’s final night have him meeting Suge in Vegas. That was not the case.

PrevPreviousYour thoughts and prayers
NextI am exasperated by our simplemindednessNext