Some folks have noticed that I don’t really write for Bleacher Report Magazine (aka: B/R Mag) .

It’s true. I don’t. And it wasn’t particularly by choice. Whereas once I averaged, oh, six or seven long features per year for the site, I’ve now been phased out of their plans. Which, to be clear, is 100 percent fine. I truly mean that. I’m all about the books. And when I’m not all about the books, I’m also about my weekly column for The Athletic—which has been genuine joy and a creative spark plug of unparalleled experience.

But … I wanna talk about Bleacher Report. Because I think it’s important.

A bunch of years ago, I was doing some legit work for B/R Mag. My stories could be as long as 10,000 words—deep dives into Jovan Belcher, into Dylan Favre, into Willie Williams, into Taj McDavid. And, man, it was awesome. B/R Mag was establishing itself as this place for top-shelf long-form writing, and I was paid very well to spend a month (or so) per project.

Last year, I wrote less. My biggest piece was on the death of Bryce Dejean-Jones, the former New Orleans Pelican who died in Dallas. It was a heavy lift, and ultimately B/R nominated it for a National Magazine Award. Just a few days ago APSE named it one of the 10 best sports features of 2017 (I’ll be honest—I haven’t read all the listed articles, but Lars’ work on a high school quarterback was far superior to my story). 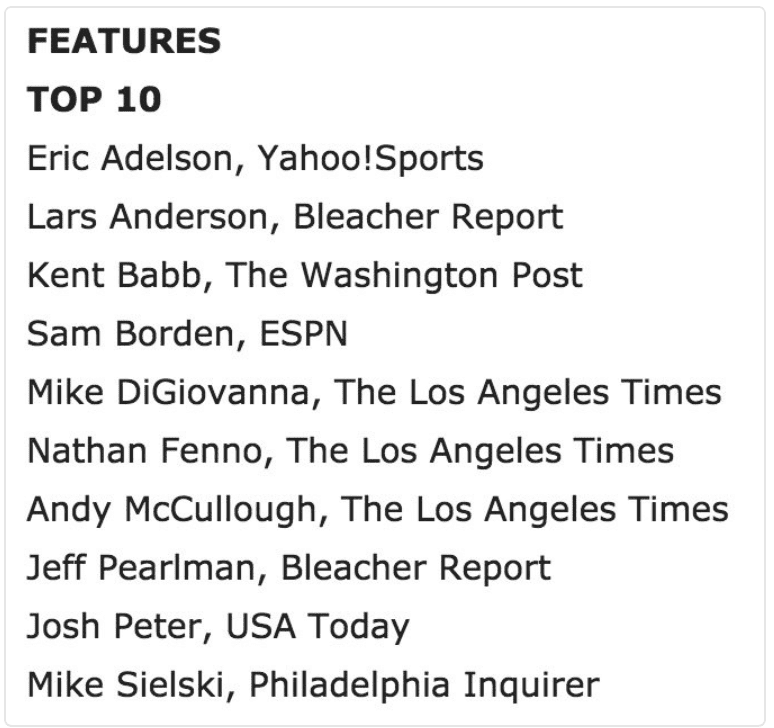 Anyhow, I’m not sure what my point is—but I did (what I like to think is) some solid stuff for the site, and the site gave my myriad opportunities.

Before I continue, a quick story: Back in 1995, when I was a young shithead reporter for The Tennessean, we had an excellent University of Tennessee beat writer named Maurice Patton. Mo was great—a veteran who knew his way around a locker room; who developed trust in coaches in administrators; who understood the game far better than I did.

Anyhow, our sports editor was Neal Scarbrough. And one day Neal asked if I’d like to write a 3,000-word all-encompassing piece on Peyton Manning, at the time the Vols’ quarterback. Neal said it would involve travel to New Orleans; it would involve interviewing dozens of people; it would involve hard work and investigative chops.

In short, he asked me to write the type of piece I’d never done before.

I can’t imagine the veteran reporters (specifically, Mo) were thrilled by this. I mean, they were better than I was at the job. Better writers, better reporters, smarter, shiftier. They grasped things I didn’t. But Neal thought it important not to just have me write, but to groom and mold and educate his young staffers. So he gave me that opportunity, and it changed the course of my career in journalism.

As we speak, Bleacher Report is doing for young writers what Neal Scarbrough did for me. In case you missed this, they sent Mirin Fader (age 26) to Lithuania for a month to write this gem on the Ball family. They’re utilizing rising scribes like Yaron Weitzman, David Gardner, Joon Lee, Brandon Sneed to bring forth these amazing, complicated narratives. The material is great. The subject matter is fresh. It’s excellent product.

On the one hand, it’s uncomfortable being phased out, right? I mean, when you hit 45 it doesn’t feel like 45. Shit, I feel 25. I feel like I’m writing as well as I ever have. I also think experience gives you tons of tools you lacked at, oh, 30. Confidence. Knowledge. Understanding. Stuff you don’t know you ever missed until you have it.

Ultimately, though, B/R Mag deserves tons of credit. In an age where jobs are drying up and lengths are being reduced and resources are being redirected, it’s the rare spot where young writers can actually go and show their mettle. It’s also a place where editors work with you; where they take the time to help develop voice and pitch and narrative.