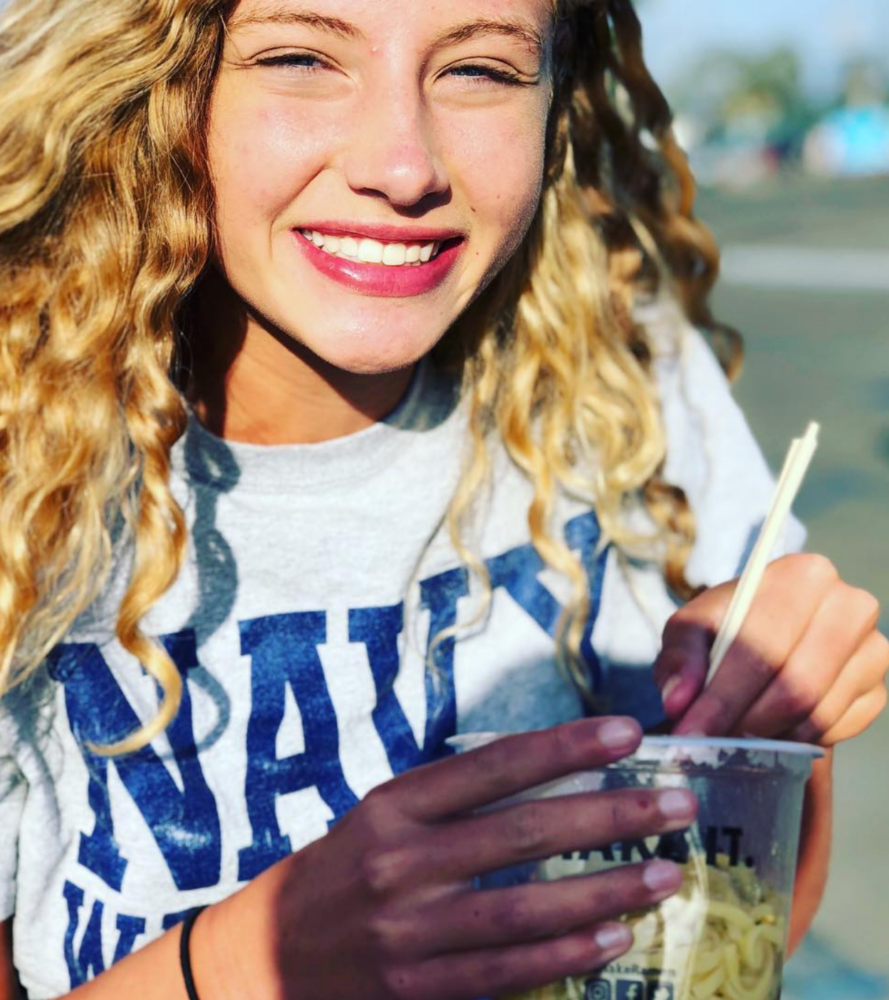 One of the happiest moments of my life was the day I learned we’d be having a daughter.

I come from a family of mostly men. A mom and a dad, obviously. But one brother, one cousin (a male), one uncle. That’s pretty much it for the ol’ Thanksgiving dinners, so when—back in 2003—the doctor told us, “It’ll be a girl,” I was giddy.

That joy has never felt misplaced.

As she approaches her 16th birthday, Casey Pearlman does me proud. Do I always feel safe while teaching her to drive? Eh, um, ah. Do I share her appreciation for Britney Spears? Eh, um, ah. Do I limit my meals to cheese products and bread? Eh, um, ah. But on the grand scale, Casey has given me as much happiness as one human can bestow another. And watching her grow from toddler to girl to young woman … just dazzling.

With that being said, the magical 400th Quaz features my daughter, Casey Marta Pearlman …

JEFF PEARLMAN: It must be quite the honor for you to be the 400th Quaz Q&A …

CASEY PEARLMAN: Yes. It really is.

C.P.: Sure. Wait. Can you hand me my iPad in the pink bag on the floor?

C.P.: Yes, with the exception of the things only you think are fun. Like sports movies and the beach.

J.P.: So what have been the good things?

C.P.: The fun days in New York, where we would go to Macy’s and the Toys R Us and have Nuts 4 Nuts. The Los Angeles Book Festival. Hmm … what else? Watching horror movies and getting ice cream and going to amusement parks to go on the coasters because everyone else is too scared to do that.

J.P.: So when you were, maybe, 7, I put you on your first truly terrifying roller coaster—Nitro at Six Flags. I was heavily criticized by some, especially because I bribed you. So, looking back, bad parenting move or good? And why?

J.P.: Do you remember sobbing at Hershey Park?

C.P.: Oh, yeah. Fahrenheit. I remember waiting on the line saying, “I can do it.” Then we were at the front and I thought, “I can’t do it.” But being the father you are the bribe went from one game to one game and a soda, to two games, an ice cream and a soda. I could not stop crying. The ladies behind us were like, “Are you OK? Do you need to get off?” I went on, and it was great. And I got three games, a soda and an ice cream. 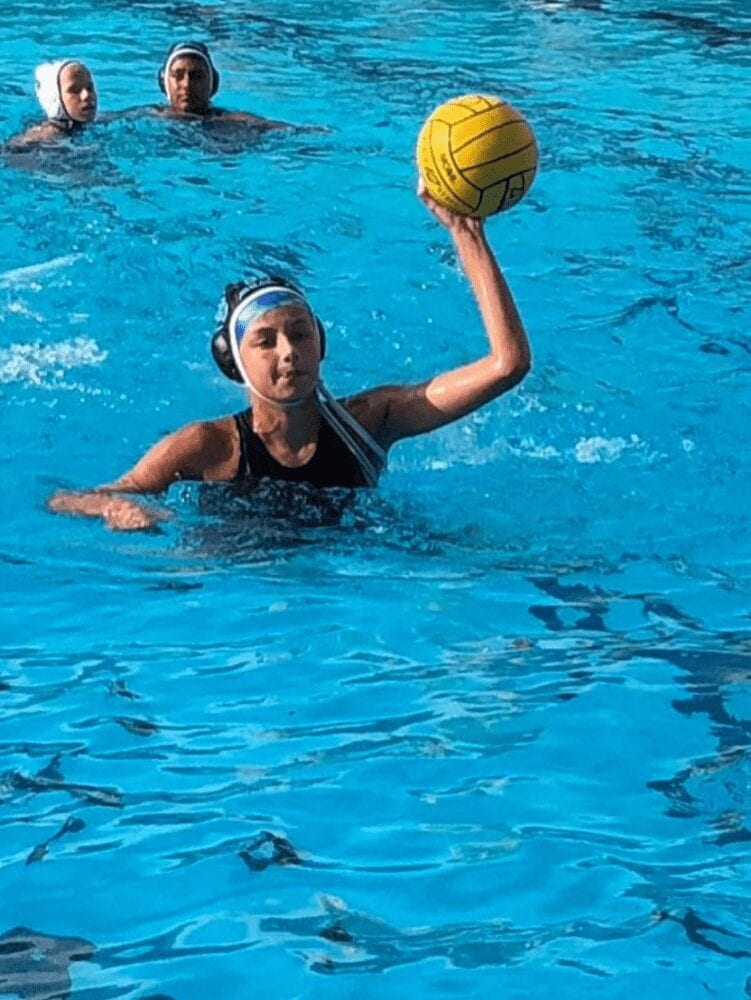 J.P.: Has your childhood gone fast? Or slow?

C.P.: [long pause]. It depends. The parts in New York I don’t remember going fast. But everything in California was relatively quick. But we moved when I started middle school—so is that my childhood?

C.P.: It is. But different than elementary school.

J.P.: I remember being a teen and finding it really hard. I struggled dating, I was just an OK student, OK athlete. I was very insecure. Where are you?

C.P.: I find it easy to want to strive because I don’t want to be like the people who don’t care. The people who just show up and they feel like they have to be there—you find out they’re not very successful later. I don’t wanna be that. I see school coming in handy later. So while I’m not enjoying all my classes, taking AP chem over forensics will be better in the long run.

I don’t find high school to be very hard, but because I’m always busy. If I’m not doing work I have water polo, and swim team, and spending time with my friends who don’t do either of those. That takes up so much of my time, so I don’t feel bored. I haven’t struggled much. My high school experience has not been very challenging.

C.P.: I can tell you people will read this and say I’m lying. ‘Why would she say she has in front of her parents?’ I took health. My whole life I’ve spent time around people who used to smoke. We’ve been to casinos where everyone smokes. I remember a commercial when I was little-—a woman with three fingers, and that happened from smoking. It turns teeth yellow, it smells awful. We’ve had family members with lung cancer. People say, “Oh, vaping isn’t bad for you.” But the juice that goes into your Juul is like multiple cigarettes in one tiny thing. And I’m not very interested in getting lung cancer I can easily avoid.

C.P.: The same thing. I kinda get vaping more, because it seems less dangerous. Considering I have anxiety, and marijuana is a depressant. It’ll make me feel worse. It might not give you lung cancer, but you can still … it kills your brain cells. I don’t need to kill my brain cells.

J.P.: I feel like I have tried, and failed, to embarrass you many times. It seems like a parental duty. Why don’t you get embarrassed by me? Or do you?

C.P.: I don’t get embarrassed. The people who are embarrassing don’t know they’re embarrassing. There’s this girl whose mom talks to our coaches and tells them how they should coach. That’s so embarrassing. Her mom’s not on the team. She doesn’t play water polo. She doesn’t need to be there. That’s embarrassing to everyone—the daughter, the other players. The things you try to do—like shouting, “Have a nice day!” loudly won’t embarrass me. Because it sounds exaggerated.

C.P.: Her things sound very sincere. When she says “Amazeballs”—she says she’s saying it ironically. But I’m not sure. I think she likes saying those things. She thinks they’re words to use.

J.P.: What do you wanna do with your life?

C.P.: I used to struggle with this question. I definitely want to go to college and become a high school history teacher. And when I get older maybe elementary school, because that’s a bit less work. I’d consider getting my doctorate, but not right away. If I don’t get into a college that interests me, maybe I’ll take a gap year. I’d like to travel and maybe teach English in a different country. But not a mission.

J.P.: What are your insecurities?

C.P.: Hmm. I’m not a very physically strong person. Probably emotionally, too. Sports-wise, I’m never gonna be great. Water polo, I’ll never be the star. I’ll never be MVP, so even if I win an award it won’t be the MVP or anything like that. And after this year it’ll be much harder, because it’s a higher level and the players are very experienced. I know my limitations. But that doesn’t mean I like them.

C.P.: Exercise. And the snack bars. It’s nice being on a team. I can’t imagine having nothing to do. Without water polo or swim I’d go home and watch TV. A lot of my friends are from sports, and if I stopped I’d never see them.

J.P.: What makes you nervous?

C.P.: I don’t enjoy being put on the spot. I have one teacher who calls on random people in a hard class. A lot of times i don’t know the answer. And he doesn’t let you say, “I don’t know.” You have to say something. I don’ enjoy that. I don’t like unfamiliar situations. I like to know what’s happening and plan out. I need to plan. Tests don’t bother me because you can prepare. Also, for sports, I don’t cry when we lose. It just happens. Whatever.

J.P.: What have been my weaknesses as a dad?

C.P.: You like to push things, but things that are unnecessary. Movies. The beach. Things we don’t want to do but that you really want us to do. Not great.

C.P.: She does the same, but bigger things. Summer camp. Trying a traveling tour. Not interested, but she insists it’s something I want. Maybe I’d enjoy it, but there are other things I wanna do. Those things might sound boring to her, but they interest me.

J.P.: Is your bed your favorite place?

J.P.: Do you at all worry about school shootings?

C.P.: Not shootings. But one time a boy put a suitcase on the field and everyone thought it was a bomb. We were in lock-down for two hours. It was an empty suitcase. So dumb. There have been three suicides. But at the school I would have gone to in New York there were three stabbings. Which is better? I don’t know. There are a lot of unstable emotions out there.

J.P.: Are you pretty happy in your life?

C.P.: Yes—at the moment. It depends on the season. Water polo is great, then it ends. I struggle with the spring season, and summer. The change of seasons. Every time I have to start something new it’s a problem.

But it works out for me. 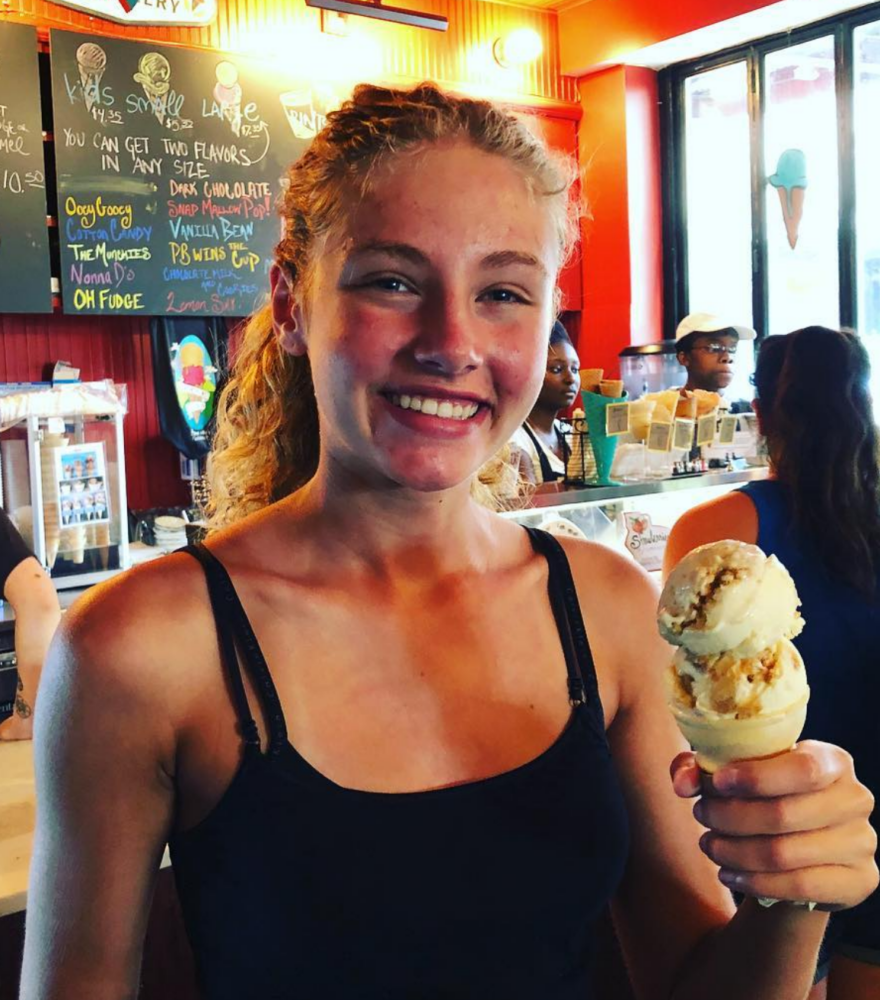 • One question you would ask Donald Trump were he here right now?: Why do you enjoy ruining people’s lives?

• Do you ever curse in conversation?: I do not.

• What does your room smell like?: Chlorine and lavender.

• Grossest thing you’ve ever seen in a pool?: I wanna say poop, but I’ll go with the rat.

• Do you think you’ll have kids and why?: Not of my own because childbirth sounds not worth it. People say, “You don’t understand. Mothers have that feeling!” No. Why go through that pain when I can choose a child?

• Why does Norma the dog love me more than you?: She’s sitting with me! Right now! She’s not sitting with you! She only likes you because you take her in the car. And in the car she sits with me.

PrevPreviousOn Lenny and Ron
NextThe Jets roll out new uniforms, and I am worse for watchingNext