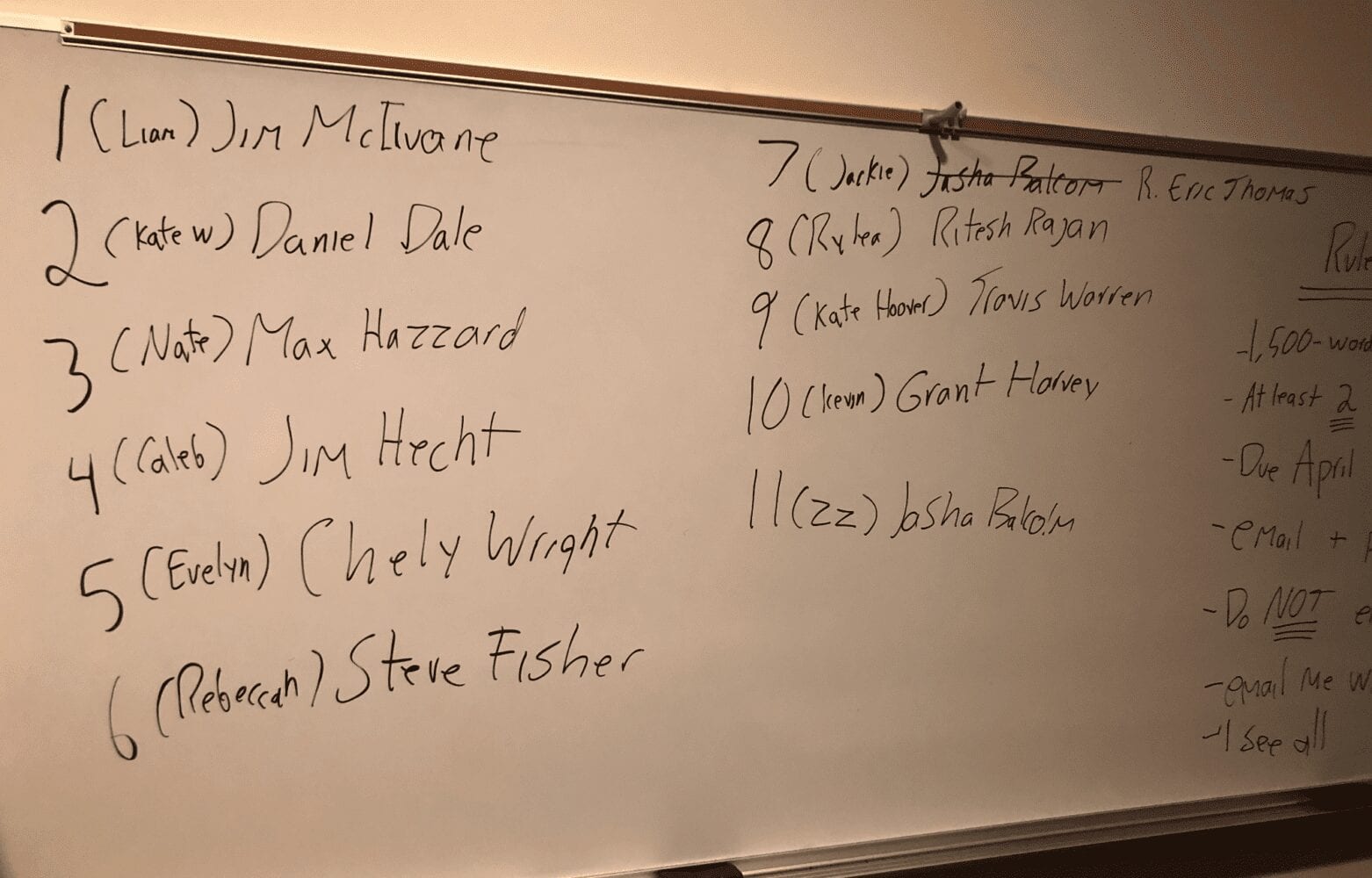 So every year, at the conclusion of my journalism class at Chapman University out here in SoCal, I hype up what I consider to be the greatest final project on earth: The Draft.

Here’s how it goes: I have 11 students. Therefore, I recruit 11 celebrities/people of note to be profiled for the last paper—a minimum 1,500-word masterpiece that must be submitted in three weeks and include multiple sources and details galore. I started this tradition back in 2010 at Manhattanville College, and through the years I’ve offered the aspiring scribes a pretty riveting collection of random noteworthies. Among The Draft’s Draftees include Randy Jones (The Cowboy from the Village People), former Mets catcher Ed Hearn, an actor from The Book of Mormon, the Brooklyn Nets’ PA announcer, the two-time defending US Memory champion, ESPN’s Adam Schefter, a rodeo star named Cord McCoy, former KISS guitarist Bruce Kulick and the low talker from Seinfeld. On and on—a ton of cool people, never a repeat.

Anyhow, today was Draft Day in Orange, California—and, as always, it was riveting. Here’s how it went …

• 1. Jim McIlvaine, former NBA center: The 32nd overall pick in the 1994 NBA Draft gets his revenge on all the haters and doubters. McIlvaine works as an announcer nowadays, so here’s something to broadcast with pride. Amazing selection from Liam.

• 3. Max Hazzard, UC Irvine point guard: The youngest draftee in The Draft history, I know Max from an Athletic profile I wrote a few months back. Terrific kid nabbed by Nate, an up-and-coming scribe.

• 4. Jim Hecht, screenwriter: The scribe of “Ice Age: The Meltdown,” melts down to fourth, where Caleb lands a find.

• 5. Chely Wright, country singer/songwriter: One of my favorite crooners and people takes her Academy of Country Music-boosted career to Evelyn.

• 6. Steve Fisher, snowboarder: Mel Kiper had Fisher going first overall to Liam, but rumors of a torn rotator spring dropped him to the six spot, where the editor of the student newspaper pounced.

• 7. First—and only—transaction of the night. Jackie originally went with Jasha Balcom, former minor league ballplayer and the Jackie Robinson stunt double in “42.” Then she heard that R. Eric Thomas liked to talk. Balcom was granted his unconditional release.

• 8. Ritesh Rajan: Mahopac’s favorite son was a star in “The Jungle Book,” but too many exercise videos on Instagram left him at eight. Rylea was happy to land a projected Top 5.

• 9. Travis Warren: Kate H. played “No Rain” for the class, then landed the Blind Melon lead singer in a remarkable musical steal.

• 10. Grant Harvey: The young actor was pegged at Top 3, but questions about commitment to the team left him at 10. Kevin was pleased.

• 11. ZZ grabs Balcom. A great get for the student who missed class with mystery ailment.

PrevPreviousWhy isn’t more made about Donald Trump saying he helped look for survivors at Ground Zero?
NextOn Lenny and RonNext