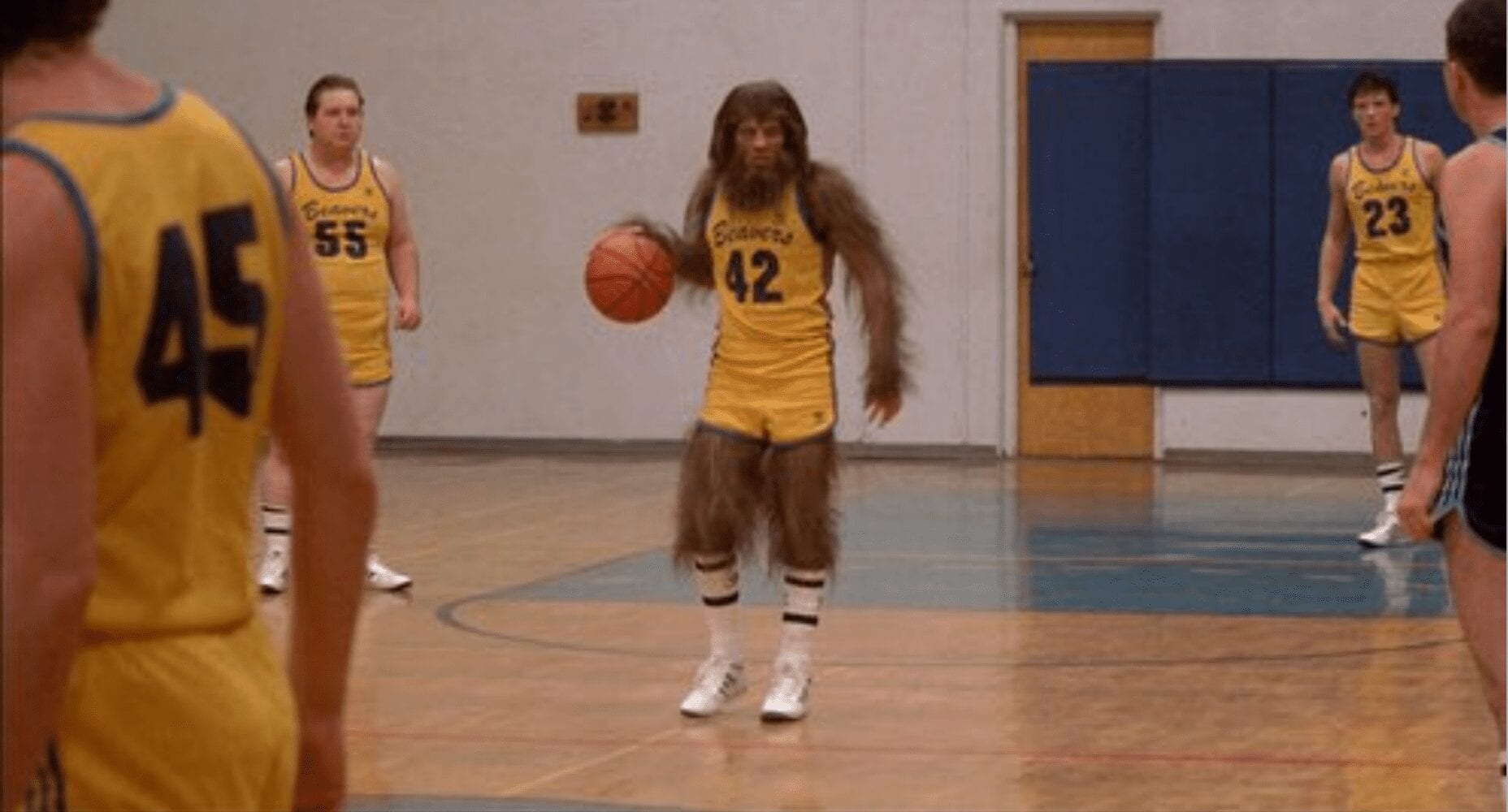 Today I appeared (with my son) on Big Screen Sports to talk Teen Wolf. It was too fun for words. Here’s the link. To celebrate—a quick retelling of the story of Scott Howard’s jump to the NBA …

The 1985 NBA Draft was a groudbreaking infusion of up-and-coming superstars who altered the future of professional basketball. Patrick Ewing. Chris Mullin. Karl Malone. Uwe Blab. Joe Dumars. All joined the league via that entry point, thereby placing ’85 in the discussion of the finest class of newcomers in the league’s history.

And it was almost drastically different.

That summer, a UNLV flameout named Scott Howard contemplated whether to declare himself eligible under the little-known one-and-done lycanthrope exception. Howard was a year removed from a historic high school season, in which he led the Beavers—a hapless collection of untalented 25-year-olds with SAG cards—to the California state title. He did so as The Wolf—a high-leaping 5-foot-3 werewolf whose ordinary basketball skills turned downright Jordan-esque as soon as his body morphed from teenager to animal. Shortly after the Beavers captured the state crown, Howard was invited to participate in the McDonald’s High School All-American game, where he memorably scored 28 points in the West’s 62-56 victory, then gnawed off the left arm, as well as four toes, of Long Beach Poly’s Chris Sandle. His subsequent arrest generated national headlines, but didn’t prevent Jerry Tarkanian from offering him a full scholarship to UNLV. Which Howard accepted over a live chicken dinner.

His time in Vegas was not good. Supplied with large quantities of cocaine and hookers, Howard scored 19 points in the Rebels’ 97-89 season-opening loss at Nevada, followed up with a still-discussed 56-point outpouring at Colorado State—then vanished. Simply vanished.

A week and a half later, police found Howard in room 14 of the Reno Motel 6. He was passed out on a bed, smelling of oyster juice and Spam, two dead prostitutes to his side and a large cereal bowl—filled with what appeared to be his own torched hair—set aside on a table. In a half-completed suicide note that rested atop the nearby television, Howard wrote: I HATE BEING THE WOLF. I’M GONNA FUCK HOOKERS, DO BLOW, EAT A LIVE CHICKEN AND THEN BLOW MY HEA—

Tarkanian issued a sternly worded statement, then planned to start Howard at point against Cal State Fullerton. He arrived at the game as a human, not wolf, and gave a stirring pre-game talk to the team, insisting, “We can beat these guys without the wolf!” An infuriated Tarkanian kicked him off the team, and shortly thereafter Howard announced his intentions to join the NBA. Greg Anthony was inserted into the starting lineup, beginning a career that launched him into the professional ranks.

Three weeks later a clean, sober, hairy Howard held a pro day at the Beavers’ gymnasium, where—back as the wolf—his 79-inch vertical leap dazzled the 24 scouts in attendance. He played full court with two teams of recent NAIA All-Americans, scored 79 points and ate no one. Though reporters were not allowed in the gym, Indiana Pacers Coach George Irvine told a writer it was the best workout he’d seen since Leroy Combs came out of Oklahoma State.

The 1985 NBA Draft was held on June 18 at Madison Square Garden. Blessed with the first overall pick, the Knicks had already made clear they would select Patrick Ewing, the 7-foot center out of Georgetown. “Don’t get me wrong, we liked Howard,” Dave DeBusschere, the team’s general manager, later said. “But you can’t take a 5-foot-3 wolf with a hooker issue over a dominant center.” The Pacers, picking second, were torn between Howard and Oklahoma forward Wayman Tisdale. Irvine wanted the wolf, but was reminded by a team intern that his state ranked seventh in America for poultry population. “We can’t have our first-round pick,” the kid pleaded, “going out at night, decimating the poultry industry.” Frank Perdue, a regular courtside presence at games, promised to picket the organization should they add Howard. The Pacers tabbed Tisdale.

The Los Angeles Clippers, picking third, were dumbfounded when Howard was still available. Carl Scheer, the general manager, had given up on Norm Nixon as the club’s point guard, and dreamed of a Howard-Lancaster Gordon backcourt carrying the franchise for the next decade. There was, however, one problem: The night before the draft, Donald Sterling—team owner and man of the people—sat down with Jim Hill for an exclusive interview and went on a drunk rambling anti-wolf tirade, saying, “I know one thing. I don’t want no fucking wolf boy on my team. It’s almost as bad as a n—-, but worse. Because this n—– has lots of hair. I bet he’s one of them wolf queers. Probably likes playing with dolls and gerbils.” Within an hour, Howard announced, should the Clippers draft him, he would take a year off and howl at passing cars. The team selected Creighton’s Benoit Benjamin, the greatest player in league history.

By now, the remaining teams grew alarmed. Why had Howard fallen to four? Were there unspoken issues? Was he an attitude problem? Were there more dead hookers? Over the next two hours, one team after another took a pass, leaving Howard alone in the draft room with Mark Acres, Voise Winters and a case of Old Milwaukee. When Portland used the 24th—and last—slot in the first round to take Terry Porter of Wisconsin-Stevens Point, Howard stood, howled and clawed Winters to death.

His arrest made national news. After serving seven years in federal prison, he engaged in a brief basketball comeback, playing six games alongside Dennis Rodman for the Long Beach Jam of the ABA. Ninety pounds overweight and regularly reeking of Crisco, Howard’s career was over.

He now runs a package store in his hometown.