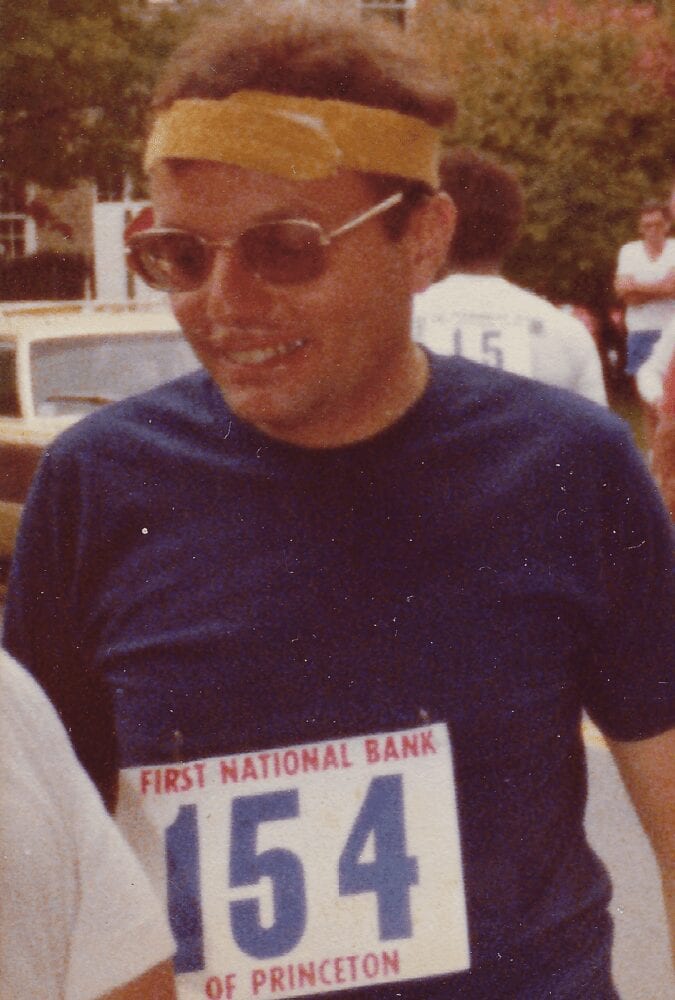 My uncle, Marty Pearlman, died yesterday. He was 81.

Shortly after learning of his passing, I thought of the above photograph, which was stashed in an old album and took me quite a bit of time to locate. The picture was snapped at some point in the early-to-mid 1980s. For the life of me I’m not sure how it wound up alongside wayward pictures of proms and elementary school classes and Yankee spring training visits.

But there it sat—and still sits. It’s an image I love for myriad reasons.

First, because it’s so unlike my uncle, who was as athletically inclined as carpet and slightly less coordinated. The next baseball Uncle Marty caught would have likely been his first. He knew little about college sports and even less about pro sports. A few minutes ago I played my nephew Jordan in a game of NHL 18 on the XBox 360, and I (lightheartedly) chose the New Jersey Devils because it was my uncle’s home state team. Then I thought, realistically, he might not have known the Devils exist.

The second reason I love the picture is because it’s very Martin Pearlman. The number pinned haphazardly to the shirt. What appears to be an out-of-print discarded hospital bandage clumsily looped around his head. The sly smile, probably following some self-deprecating joke about his two left feet or 25-minute mile.

Third, because he’s young and vibrant and in the moment.

He’s the Uncle Marty I remember as a child.

There is a thing that happens when people die these days, and it makes me uncomfortable. We go to Facebook, note that a favorite teacher or a third aunt has passed—then behold as the expressions of sympathy pour in. And I’m not saying anything’s wrong with it. But I tend to squirm, because in most of the cases I feel like a bit of a fraud; like there are tons of people more worthy of your sympathy.

In this case, however, I’m a bit broken.

Because I come from a particularly small family, every relative counts. And for the entirety of my life, Uncle Marty—Dad’s older brother—was a cornerstone. Throughout my youth, holidays would be attended by my grandparents, my parents, my brother, my Grandma Marta and Grandpa Curt, my cousin Daniel and his parents, Uncle Marty and Aunt Mary. That was it.

I was about 11 when my aunt and uncle got divorced. It was jarring—our family had never had a divorce before. I actually remember the last time I saw them together. It was at a distant cousin’s Bar Mitzvah in Virginia, and I asked my mom, “Why aren’t Aunt Mary and Uncle Marty dancing?”

I was too young to understand the pain Uncle Marty was experiencing. But, in hindsight, I can see the rawness. He was—in 1950s term—a guy who needed a woman’s touch. My uncle was the smartest member of the family, without much debate. He was  super well-educated (University of Michigan undergrad; masters at the University of Utah, PhD at Rutgers) and—starting in 1969—worked as a professor in the psychology department of Middlesex County College while also running a  private practice. But he was also sort of a wrinkled napkin. He was raised in an age when men didn’t really cook, or pick out their own clothing, or … really, do much of anything except go to work, come home from work, read the newspaper. There is a photograph, somewhere in a long-lost family album, of my uncle holding up a magazine cover that reads DIVORCE in bold letters. He’s smiling, but not really smiling. Happiness sans the happy. I always remember that.

My uncle attended a good Hebrew school. I know that because, come Jewish holidays, my Grandma Marta (Mom’s mom) would hear him read the prayers and whisper, “You know, Marty went to a good Hebrew school.” On Passover, his long-winded, integrity-loaded rendition of “Had Gadya” was music to my ears. High and low. On key. Off key. But hilarious and sincere and self-aware.

My uncle wasn’t just good conversation. He was terrific conversation. Delightful laugh, warm expressions. He was naturally curious; asked a ton of questions; could hold forth on anything from Trump and Clinton to Spike Lee films and Florida traffic. I knew he was my intellectual superior. And surely he knew he was my intellectual superior. But it never felt that way. He never held his smarts over people. Never, ever. When we spoke via phone, he’d always express genuine pride in whatever my latest book was—shocking and loving, because he knew little of the topic. It was sorta like talking with a boastful grandfather: “Jeff, you know, I have a friend who apparently loves the Green Bay Packers, and I was telling him about your Brett Favre book …”

My uncle was surprising. You wouldn’t think so. But he was. He wasn’t religious, but spoke Yiddish. He was super well-versed in belief systems, and liked understanding different modes of thinking. After his divorce from my aunt, he started going on Outward Bound adventure trips. The ensuing stories—told at holiday tables—filled my young mind with all sorts of intrigue and bewilderment. “Wait. They leave you alone in the forest for a week with a roll of toilet paper and a stick?” Yes. “And you paid money for that?” Yes. “Why?” To challenge myself.

He saw movies. Tons of movies. Bad movies and good movies. Tremendous movies and shit movies. I think it was initially a way for him and my cousin Daniel to connect, and his breakdowns of, oh, “Nightmare on Elm Street III” were always worth the price of admission.

After the divorce my uncle ultimately began a new relationship with a lovely woman named Patsy that lasted for some 30 years. It was, on the surface, a confusing pairing. He lived in New Jersey. She lived in California. They’d fly back and forth, back and forth—for three decades. Head-scratching stuff. Yesterday I called Patsy, and we spoke about it for the first time ever. “I know it always sounded quirky, but it just worked for us,” she told me through tears. “I never knew anyone like your uncle. I never loved anyone like I loved him.”

In the hours since I learned of his passing, I’ve been Googling my uncle—who leaves behind less of a social media imprint than almost any human on the planet. His Facebook page ID photo is blank. There’s no Twitter, no website. He published a text book in 2010, but the Amazon page lacks any author information (He’d have gotten a kick over the one review—a five-star rating that reads, “It was like brand new for a much better price! It was awesome! I would recommend this to other people!”).

The one thing I did find, however, made me laugh aloud.

And, I’m quite certain, once made my uncle laugh aloud, too.

Four years ago, Middlesex’s alumni magazine ran this brief entry on a page listing donations made to the college …

Then, in the follow-up issue, this …

But with the legacy of a son, three grandchildren and a life of intrigue, rumors of his demise remain greatly exaggerated.