Brad Parscale will work for food

In case you missed this, Donald Trump’s Tulsa rally was an absolute disaster.

It started with the hype. So much hype. Millions of people want to attend! Donald Trump is the biggest draw in the world! Excitement! Action! Thrills!

Then the day-of. This will be amazing! We need more room! Everyone wants to be here! Extra space! Extra time! Making America Great Again!

And, finally, the event.

Many moons ago, as a young writer at The Tennessean in Nashville, I covered a Jackyl-ZZ Top concert at the local dilapidated convention center. It was smoky and sad and half filled, and as I exited I felt like a stubbed-out cigarette. That’s probably how Donald Trump felt today, looking out into an ocean of vacant seats, standing before a half-filled arena of people he would never dare associate with on a one-on-one basis. The music was loud, the fake enthusiasm was buzzing around—but it was a can of flat ginger ale. Little more.

Which, of course means that Brad Parscale, Trump’s campaign manager, is toast. 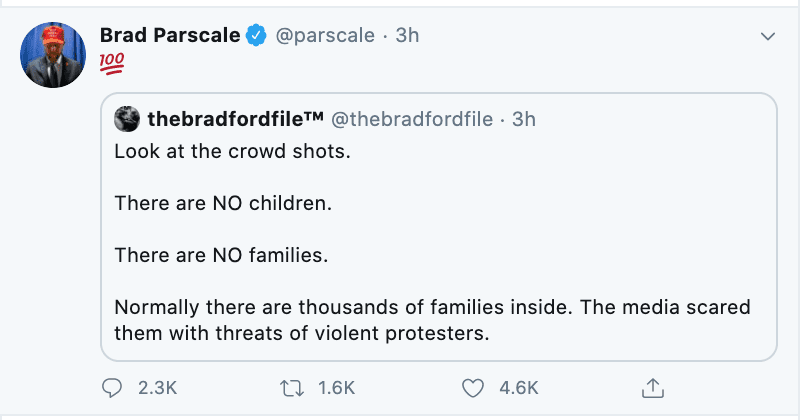 Anyhow, here’s how the next few days (maybe weeks) go …

• Rumors swirl of Trump’s plans to shake up the campaign.

• Trump decides to shake up the campaign, fire Brad Parscale and replace him with former NRA spokeswoman Dana Loesch.

• Brad Parscale announces that he’s stepping aside to spend more time with family.

• Trump gains two or three points in the polls after Joe Biden accidentally calls a horse a cow during a speech. Trump then praises Loesch for changing everything and refers to Parscale as a “loser.”

• Brad Parscale appears on CNN to admit Trump is unhinged.

• Joe Biden wins in a landslide.

PrevPreviousWhen I was a moron
NextI don’t recognize this AmericaNext