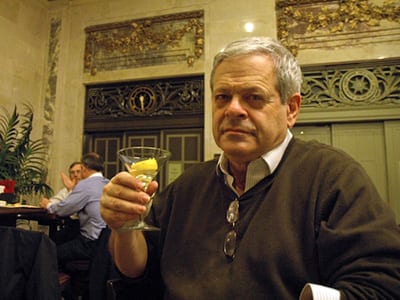 If you’re any sort of journalist, the name Daniel Okrent means something special.

To be blunt, Dan has been, well, everywhere. He’s written seven books, including, most recently, the highly praised Last Call: The Rise and Fall of Prohibition. He’s worked for most of the biggies, ranging from Sports Illustrated to Life to the New York Times—where he famously served as the newspaper’s first public editor. Oddly, despite having been nominated for a Pulitzer Prize and despite taking on the Jayson Blair scandal and despite writing the first lengthy profile of an obscure stats geek named Bill James, Okrent’s greatest impact may well be that he is (friggin’ hell!) the inventor of fantasy baseball.

Here, Dan addresses the death of print and the rise of fantasy sports; the difficulty in hanging on as an aging scribe and the difficulty in determining Kiss’ all-time greatest guitarist. One can visit Dan’s website here.

Daniel Okrent, welcome to The Quaz …

JEFF PEARLMAN: First, Dan, thanks for doing this. Truly appreciated. To begin with—you are the creator of Rotisserie League Baseball. Which to me, for lack of a better word, is awesome. Much has been written about the origins, the restaurant, the idea, etc … but what fascinates me is this. In 2012, very few players under the age of, oh, 20, know what “Rotisserie Baseball” is. To them, it’s “Fantasy.” And I’ve often wondered—A. How did that happen?; B. Does it piss you off? C. Was it deliberate?

DANIEL OKRENT: My fellow Original Rotisserians and I trademarked the name, hoping that if anyone ever made any money off of our invention, it ought to be us. The rest of the world was smarter than we were: if we come up with a generic name, they reasoned, those greedy rats (i.e., us) would be trumped. And so we were.

Am I pissed? Now that I’m no longer looking for nickels in the back seat to pay college tuitions, no.

J.P.: You’ve been in journalism for more than 40 years. Your career is fascinating and distinguished and a million other adjectives. Hence, you seem to be a good person to ask: Are we going the wrong direction? What I mean is, these days it seems entirely about getting information first—correct or incorrect a secondary concerned. There’s very little dedication to the crafts of writing and reporting, and great devotion to shock value and page hits. This really troubles me. But am I just some Chicken Little subscriber?

D.O.: The plague of being first is as old as the craft of journalism itself. For decades, the UPI boasted that it sent out word of the Kennedy assassination something like 15 seconds before the AP, as if that were a sign of competence. (You may notice that UPI is no longer in business.) In print, when there were eight dailies in New York, newsboys would hit the street with Extras whenever the editors had managed to pull off a scoop, no matter how inconsequential. The only difference today is that instead of two wire services, or eight daily papers, there are 12 million bloggers, tweeters, and other species adding to the cacophony.

J.P.: You were the chief editor for Life magazine. I love Life, I’ve always loved Life. The old photos, the enormous pages, the vividness of some of the writing. Why couldn’t that sort of publication work in 2012?

D.O.: Well, I don’t really think any sort of publication can work in 2012—or, I guess, much longer beyond 2012.  Life’s problem was never a circulation problem; it was advertising. The old weekly folded because Campbell Soup reached more people more efficiently by advertising on Queen for a Day and other epic television shows. The monthly Life folded because, in the scheme of things, its earnings, even in a great year,  amounted to a rounding error for the people who ran Time Inc., and by the time of its final gasps, it had become a management problem as well.

J.P.: How did you get here? What I mean is, I know the basics—Michigan born and raised, University of Michigan grad, etc. But what was your path toward becoming a journalist? How did it actually happen?

D.O.: I spent four years in Ann Arbor working for the Michigan Daily, not only not going to class but barely aware that classes existed.  But through a peculiar turn of events I ended up first in the book publishing business, starting at Alfred A. Knopf in 1969 and leaving the business after I had washed out as the ridiculously underqualified editor-in-chief of Harcourt Brace in 1978 (I was 27 when they hired me; I didn’t know better, but they should have). I left New York with my tail between my legs, tried to figure out what was next, wrote a piece for Bob Creamer—wonderful man—at SI, and boom: I was a journalist.

J.P.: Are newspapers, as a physical item, dead? I mean, they obviously still exist. But has the obit been written?

D.O.: I think so. The economics just don’t make sense any more. In fact, if you had gone to the newspaper publishers of America 20 years ago and said, “I have a great new business model for you — no paper, no ink, no trucks, no newsstands, no pressman’s union, no mailer’s union,” they all would have said “I want it NOW!” Well, now they’ve got it. Online advertising is never going to be the answer for news websites—if I’m selling a car, why would I advertise in the Boston Globe if I can advertise instead on cars.com and craigslist?  The revenue will have to come from readers, as it’s beginning to. I think it’ll work, in the long run, for the national papers (the NY Times, the Wall Street Journal), but I’m worried about the regionals and the small local dailies.

J.P.: During your time as public editor of The New York Times, you came up with the oft-repeated “Okrent’s Law,” which states, “The pursuit of balance can create imbalance because sometimes something is true.” Specifically, you were addressing the need of the media to always provide an opposing viewpoint in the name of “balanced” reporting, even when one side might carry the weight of 99 and the other side the weight of one. How big a problem do you consider this to be in journalism? And do you think too many editors subscribe to this philosophy, thought be damned?

D.O.: First, I didn’t call it Okrent’s Law; that was just a sentence from an interview I gave, and someone else hung a name on it. But the problem is real, and pervasive, and getting more complicated. As fewer and fewer news media stake a claim on being impartial, those that do are more and more inclined to cover their asses with the “on the one hand, on the other hand” trope.  Depresses the hell out of me.

J.P.: In 2003 your book Great Fortune: The Epic of Rockefeller Center, was a finalist for the Pulitzer Prize. I once won a ribbon for coming in third place (in my age group) in the Lake Mahopac 8 Mile Run—and that’s about all I’ve got. What does it feel like, learning you’ve been nominated for a Pulitzer? And what was it like learning you didn’t ultimately win?

D.O.: The Pulitzer committee is  weird—I didn’t know I’d been a finalist until the day they announced the winner. As a result, I didn’t have the opportunity to be disappointed; the finalist designation was a total shock. Of course, nine years later, I’m really pissed off and sulky about it.

D.O.: You bet. In fact, I don’t really practice journalism any more; don’t have the legs for it.

J.P.: I’m going to make a point, and tell me why I’m wrong (or, perhaps, right). I was on staff at Sports Illustrated when the writers included Steve Rushin, Richard Hoffer, Rick Reilly, Jack McCallum, Alexander Wolff, Michael Farber, Jon Wertheim, Phil Taylor, Bill Nack, Leigh Montville. And I would argue that those guys were far superior to the sports writers from the past everyone raves about—the Red Smiths, the Grantland Rices, the Edwin Popes, the Furman Bishers. I read a lot of the older work and think, “Meh, sorta overhyped—and a lot of really bad, forced analogies.” Am I now damned to hell?

D.O.: Take Red Smith out of your second list, and I think you’re absolutely right (I would have asked you to remove W.C. Heinz, John Lardner, Jim Murray, and A.J. Liebling, too).  But there’s no question that the maturation of Sports Illustrated in the 1960s, under the great editor Andre Laguerre, lifted sportswriting to a new level. The real comparison should be made between your excellent list, and the one of an earlier SI generation: Dan Jenkins, Mark Kram, Bob Creamer, Frank Deford, etc.  And stepping away from SI, the great Roger Angell, of course.

By the way, I’m really glad you included Hoffer on your list of favorites. I don’t know why he’s so underappreciated; to me, he’s the perfect sportswriter, filled with grace and ideas, but never taking himself too seriously.

J.P.: How do you feel about the role of Amazon, as it relates to book sales? Are you troubled? Do you see it as a blessing?

D.O.: I’m troubled by their influence, and blessed—as a reader and as a writer—by their service. Can’t live with ’em, can’t live without ’em.

THE QUAZ EXPRESS WITH DANIEL OKRENT:

• Have you ever thought you were about to die in a plane crash? If so, please share some details: At some point, however  briefly, every time I fly. But most sustainedly on a commuter flight from Monterey to San Francisco in 1997, where the turbulence was so bad the flight attendant was throwing up.

• Jayson Blair has his own consulting and life coach business. Can an argument be made that he’d offer quality services?: Yes—by saying, “don’t do what I did.”

• Five reasons one should make Detroit his vacation destination: Other than the Daniel Okrent Birthplace and National Historic Site? I’d add Slow’s barbeque, the Fox Theater, the Ford River Rouge complex, Lafayette Coney Island’s loose-meat hamburgers—and because all Americans should know what’s happened to this once wonderful city.

• You have a bit part of Woody Allen’s Sweet and Lowdown—a film I genuinely enjoyed. How did this happen?: Bit part?? I’m the first voice you hear when the movie starts, and so I’m first in the credit roll at the end! Allen’s longtime casting director is one of my dearest friends. He was looking for a talking head to move the story forward, and Juliet knew I a) have a head, and b) talk.

• Does everything we’ve learned about Penn State wipe out any good Joe Paterno did in his coaching career?: This is too painful to answer. I suppose he genuinely helped some of the young men who played for him, and that’s good. He gave a lot of money to the Penn State library system, and that’s good, too. Do those facts outweigh what he did wrong? Not nearly. But did his malfeasance mean those earlier things never happened? No, of course not,