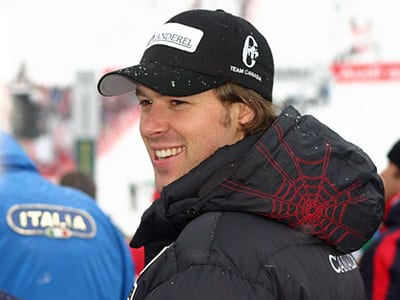 A couple of years ago, while skiing for either the first or second time in my life, I was sliding gently down a hill when I slammed onto my head and rolled over. It friggin’ hurt—I was cold, miserable and black and blue. Yet the pain hardly compared to the embarrassment when James Luftig, my neighbor’s 7-year-old son, went whizzing past. “Hey Jeff!” he said, as others laughed at my pathetic state.

The beauty of the Quaz, for me, is that I get to ask really cool people questions about thinks I both love and abhor. So today, I’m thrilled to have Ryan Semple, two-time Olympic skier, here to tell me why I’m wrong (or … right?) about the sport that made him a household name in Canada.

Here, Ryan talks the beauty of fresh snow, why he decided to retire, how he’s become such a huge Menudo. You can follow him on Twitter here, and visit his website here.

Ryan Semple, you’re up on the Quaz …

JEFF PEARLMAN: You’re a two-time Canadian Olympian who goes down as one of his nation’s all-time best skiers. A handful of months ago, after an 11-year career, you announced your retirement. First, how did you decide to come to this point? Second, how weird/painful/upsetting is it to think of yourself as a “former” skier?

RYAN SEMPLE: The decision took some time. Unfortunately, I had an injury in January and that set me back more than expected. It came down to a risk versus reward scenario, and the risk was too great. After having dealt with many obstacles in my career, I didn’t want to jeopardize “life after skiing” for another Olympic dream. Is it weird to think of myself as a former skier? Well, I will always be a skier—nothing can change that. It is such a strong community and I do not plan on ever leaving the sport completely. In the meantime, it is a big change. Is it painful? No. The more time passes, the more I realize that the decision I made was a good one.

J.P.: I’m thrilled to have you here, because it gives me the chance to ask a question that plagues me. My daughter is 9 and unathletic—but she loves skiing. She’s actually pretty solid … but watching her scares the living shit out of me. I think of Sonny Bono crashing into a tree, of my mother-in-law breaking a leg. I think how insane it is to fly down a mountain on wood sticks. How can I let go of this fear? And tell me why, ultimately, I’m being irrational, not wise?

R.S.: Do you ski yourself? [WRITER’S NOTE: No] It is a great winter sport to do as a family. Plus, you can’t let your 9-year old show you up!

To ease your mind, I was just watching the Beaver Creek World Cup this passed weekend with my mother. An Austrian crashed and I said, “It’s a lot harder watching from home isn’t it?”  She just nodded up and down. All this to say, as a parent, your primary focus will always be safety when it comes to your own child. Whether it is skiing or any other high-risk activity. Take the initiative and go for a few runs together, you will quickly shift your focus toward your own needs. One thing is for certain—always make sure to get proper instruction. Like most things in life, if you learn the fundamentals you should be fine.

J.P.: Your skiing experience began at age of 3, on the slopes of Mont Blanc, north of Montreal. I’m pretty blown away by this—age THREE!? A. Do you remember this? B. What led you to the slopes? Are you from a skiing family? How did it happen?

R.S.: I wish I could say I remember skiing at 3 but I don’t. I have many memories from ages 5 and 6 onward. Family is what led me to the slopes. Skiing was something my parents did together in Quebec, so naturally we wanted to participate at a young age. It became our weekend activity that eventually led to joining the Nancy Green program. Every Friday afternoon we would pack our bags and head north to the slopes.

J.P.: What was your first moment of, “holy shit, I’m REALLY good at this”? Like, was there a lightbulb moment, when you realized you could flat-out ski? A moment of tremendous love and reverence for the sport?

R.S.: Well that moment happened to my parents when I won a Pepsi Challenge event at age 6. It was a race that anyone could enter for fun, all ages, and I somehow took the prize. Looking back now I just smile.

The moment I started to realize I had potential for great things was when I was 12. I qualified for an international competition in Italy called Topolino. This event is held annually and brings together all the top skiers from different countries. Many famous names have attended and won.  This exposure made me want to push my limits and see how far the journey would go …

R.S.: It is the sense of freedom I experience each time I head down the mountain. You can go fast or slow, make small or large turns, hit jumps … it really doesn’t matter. You choose your own boundaries and set your own limits. The better you get the more effortless it seems. Simply put. it is a rewarding sport that you can do with family and friends.

R.S.: Finishing 15th at the Vancouver Olympics was such a great feeling. Not only was the day great but the two-year journey leading up to it is unforgettable. Moments that will last a lifetime.

The toughest moment was when I realized I had to have hip surgery for the second time. I had just spent eight months in physio and was progressing as planned. During a typical training day, I had a setback in the course that started a downward spiral. The end result was a second surgery. Such a frustrating time.

J.P.: I’m riveted by the Olympic experience, for an unconventional reason. It just strikes me as so … fleeting. Competitors work their whole lives to be in the Olympics. Then, finally, it comes. Then—pfft—it’s over, and you’re back to the grind. Are the Olympics worth the grind and struggle and pain? Or is it, at all, over-hyped?

R.S.: They are totally worth it.  Representing your country is one thing, but when the whole world stops to watch for three weeks … that is something rare.

I’m fortunate to have participated in two—both of them emotional. The first as a young man with unrealistic hopes and dreams. The second, as a mature racer who traveled a road filled with peaks and valleys.

J.P.: At the highest levels of skiing, are there acknowledgments of impossibility? What I mean is, for example, I ran college track at the University of Delaware. There were runners on opposing teams who, factually, I would never, ever beat—even if they ran their worst and I ran my all-time best. Were there guys you couldn’t beat, and you just knew it? Or do you enter every event thinking, “If I nail this, I’m gold …”

R.S.: In skiing the best in the world are able to be competitive on a bad day. With that said, it is a winter sport and Mother Nature tends to join the party every once in a while. Sometimes good others not so much—which emphasizes the fact that you should only be focusing on what you can control. I would always make sure to save my best for race day. I believed in my ability to win, the stars just needed to align.

J.P.: You’re a graduate of Ashbury College, a private boarding school that’s also alma mater to Matthew Perry. From afar, it sounds like a pretty rigid, stuffy place to grow. What am I missing here?

R.S.: Back then the school certainly enforced a rigid curriculum, but was open-minded to sport. My previous school did not provide me with any options for skiing. So in this transition period I was welcomed with open arms and given the freedom necessary to excel. As long as my academics were maintained, life was good. So if you would like to be an Olympian or successful Hollywood actor, all you have to do is attend Ashbury College …

J.P.: Can you ski for fun? I mean, is that still possible? Can you just kick back, head to the nearest mediocre slope and enjoy yourself like an average schlub?

R.S.: The answer is yes, but complicated. Do I feel like getting all my gear and ripping 21 turns at the nearest mountain with barely any snow? Not particularly. The fact is after having spent so much time in the Rockies and Europe, your standards do change. But not just for “quality of skiing.” In Europe, for example, they rarely have line ups! Just run after run, until you’ve had enough. I come home for Christmas and you wait for 45 minutes to go up the lift. Call me impatient but that is downright frustrating.

As of right now, this is the most time I’ve spent away from the sport. With snowflakes finally touching down, I’m feeling the itch to get out. Looks like I’m going skiing this weekend!

• Have you ever thought you were about to die in a plane crash? If so, what do you recall?: Thankfully no. I’ve had that moment of “oh shit,” when you start to look around and see if anyone else is nervous. You know what I’m talking about. After 20 years of flying, I certainly hope this scenario does not re-occur.

• The world needs to know—what was it like competing against Florian Eckert?: We actually missed each others by a few years. I hadn’t transitioned from slalom to downhill so we never competed.  Oh wait … Ich bin Fantastisch!!

• Bode Miller sorta came off as an unfulfilled talent here in America. Fair or unfair?: Unfair. His transition to World Cup skiing was innovative and exciting. He did it on parabolic skies, which initiated a new movement in our sport. His mark will remain and the achievements speak for themselves. Respect!

• Better Canadian representative: Justin Bieber or Bryan Adams?: Bieber seems to be doing a good job of keeping us on the map. Mind you Adam’s “Summer of ’69” still howls in the Austrian “après ski” world.

• What happens after we die?: We rest in peace.

• Best joke you know: Not appropriate …

• Why do you think Menudo never earned their due as musical geniuses?: Because I had to Google them to find out who they were … that should be self-explanatory.