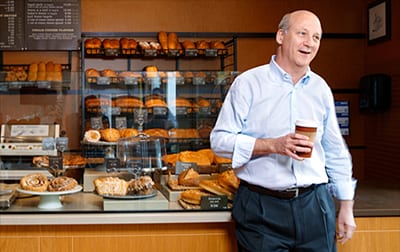 As many regular readers of this site know, I absolutely love Panera Bread. It’s the spot where I’ve written, oh, 27.4 percent of my six books, and it’ll be the spot (God willing) where I write the next six.

Anyhow, after repeatedly abusing the refill policy, I decided to make good by inviting Ron Shaich, Panera’s founder and executive chairman of the board, to the Quaz. The founder of two marquee restaurant chains (he’s also the man behind Au Bon Pain), Shaich has established himself as one of the greats of the genre. Hell, Panera serves more than seven million people per week and employs more than 70,000 associates.

Here, Shaich talks bread and bread (cha-ching); what it takes to operate a successful business and how to handle dolts (ahem) who take refill after refill. You can visit his website here, and follow Panera on Twitter here.

JEFF PEARLMAN: Ron, you’ve been in the restaurant business for 30 years. This strikes me as amazing, because I’ve been told, oh, 265 times that owning/running a restaurant is (between health inspections/jerk customers/indifferent employees/cost of food and supplies) 8,000 times more work than it’s worth. Are people who say that wrong? Or do you simply know something they don’t?

RON SHAICH: I’ve been told that too; the restaurant business can be brutal. For 30 years I’ve stayed rigid in my vision, yet flexible in my execution. While it’s important to be responsive to changing tastes and incorporate fresh new ideas, it’s fundamental to maintain a consistent vision and personality. For Panera, that vision has always started with hand-crafted artisan bread, baked fresh in each cafe every morning. Bread is our passion, soul and expertise, and our other food offerings must be as good as the bread. We have stayed true to the cultural values we established when we set out, and by doing so, we have built a model that has sustained itself over time.

R.S.: I arrived at Clark with the intention of making a difference in the world through politics. One day, we were thrown out of the local convenience store, accused (wrongly) of stealing. So the Clark student government body opened its own student-run general store. The power of the general store was that it taught me about myself and the possibility to make a difference through the medium of business. I also discovered joy in the process of solving problems.

That’s basically what I’ve been doing for the past 30 years–trying to solve problems. That’s what led me to act when I saw a report on the evening news about the crisis of food insecurity in the U.S. and the concept of community cafes. It just clicked: running cafes is what we do—we open a cafe every 72 hours—we could open a community cafe, a cafe of shared responsibility. This was an opportunity to feed people while raising the level of awareness of food insecurity. That’s how the Panera Cares concept was born. We now operate Panera Cares Cafes in five cities across the U.S. And it’s working—the cafes are self-sustaining. I truly believe that people will do the right thing if they are given the chance. So, Panera has become my main platform for doing well and doing good.

J.P.: So I’ve written huge chunks of all my books in Panera. I love the place—I really do. Biggest reason: free refills. In a given day, I might drink, oh, 10-to-15 glasses of something (soda/iced tea/iced coffee) in a given location, all for $1.50 or so. My question for you, and it’s admittedly random, is this: Am I (and people like me) taking advantage of the system? By “free refills,” do restaurants really mean, hey, take a second. Maybe even a third. But … 10? Uh, no.

R.S.: I imagine that few restaurants actually intend for the customer to sit around all day nursing a soft drink on free refills. You have to remember, Jeff, that I am a business man. But, we believe that you should start any relationship by making a deposit (before a withdrawal). Most customers who enjoy free refills eventually get around to purchasing something to eat with their drink or return for a meal at another time because they felt welcomed. One tenet of Panera’s Concept Essence, our guiding principles that have existed since our inception, is that we are an everyday oasis for our customers. Many people, and even organizations, use our cafes as offices away from the office. Sometimes I wonder how many great novels have been written inside our cafes. Every week I receive letters from people thanking us for our Wi-Fi and dining room liberties. I received a letter yesterday from a man running a non-profit who wrote that Panera had given him “the opportunity to help thousands and thousands of students and parents” because they were able to use Panera as a meeting place. When I read something like that I am reminded of the power of our brand that goes way, way beyond what’s on our menu.

J.P.: I’m fascinated by product development in large chain restaurants. Specifically, how does a sandwich or pastry morph from idea in someone’s head to an actuality in hundreds of restaurants?

R.S.: Our Innovation Process—for everything we do—is as follows:

• Determine what job you need to complete for whom (i.e., your audience)

• Determine what matters to succeed

• Prototype (to learn and experience)

J.P.: I would love—absolutely love—to hear your best all-time jerk customer story. I’m sure you have 800,000 of them. I just want one, please …

R.S.: Every day for a year I watched a customer roll—literally—into one of our cafes with a desktop computer on wheels, monitor and briefcase. Panera had become his rent-free office. He had taken our hospitality just a bit too far.

J.P.: As you surely know, Michael Bloomberg, New York City’s mayor, pushed for an XL soda ban. It was controversial, obviously, and I’m wondering: A. How did you feel about it? B. Do restaurants and eateries have any sort of health obligations toward their customers? Are you, and McDonald’s and Starbucks and all the other places, supposed to be looking out for people’s health?

R.S.: I get what the mayor was trying to do. I think the edification of the consumer is a marvelous thing, but, in the end, consumers make their own choices. Our goals are choice, transparency and clean ingredients. Restaurants have an obligation to be honest and forthcoming about ingredients, where those ingredients come from and how they are raised or processed. Panera was the first quick casual concept to post calorie counts on menu boards. Building relationships based on trust with our customers has been a core cultural value of Panera’s from the beginning.

J.P.: I have a huge complaint about Panera and Starbucks—and I’m hitting it with you here. While a few random locations seem to have recycling bins, the vast majority don’t. Ron. I can’t even guess the amount of plastic that gets thrown away and sent to dumpsters every single day via Panera. How can you justify this?

R.S.: Panera is invested in reducing our waste stream and its effects on the environment we all share and must safeguard. Our Sustainability Group is working on an initiative to integrate recycling in all of our company cafes. Recycling is done at different levels in different cafes according to the terms of our contract with our local waste management companies. In many cases, we have been able to make the transition from cardboard-only recycling to single stream cycling (plastic, paper, tin and cardboard).

We also have instituted composting in about 25 of our cafes and are working on expanding that program. In addition, Panera started an initiative we call the Environmental Captain Program, in which one or two associates in each cafe are designated to lead our ongoing energy reduction efforts.

J.P.: I read a profile of you, I believe, in USA Today several years back where you identified yourself as a Democrat, and spoke of your past in politics. Michael Jordan once famously said (when asked why he didn’t endorse candidates), “Republicans buy shoes, too.” Do you at all worry about any sort of backlash when letting folks know where you stand. I’m guessing Republicans buy sandwiches, too.

R.S.: As a matter of practice, I keep my personal political and charitable activities separate from my role at Panera, to the extent that is possible when you are associated so comprehensively with a brand. When I speak on behalf of No Labels I do so as Ron Shaich, not as the Chairman and Co-CEO of Panera Bread. Of course, I am always up for a lively debate with anyone at work, from associates on the line to board members.

R.S.: Ultimate Highlight: The moment when I “figure it out” first, replete with the intellectual joy of “getting it.” Ultimate Low: When we divested successful Au Bon Pain to bet it all on Panera. People were saying we were finished. It was an all-out war.

J.P.: You’re a successful businessman, and our economy still seems to stink. What do you think we, as a people, are doing wrong when it comes to creating jobs? Is there an easy solution?

R.S.: I don’t believe there is an easy solution to this complex problem. But we can start by encouraging manufacturing again in America. This would recreate our infrastructure as well as an ecosystem that would foster ever more growth.

• Have you ever thought you were about to die in a plane crash? If so, what do you recall?: We were flying over Watertown, NY, and it felt like we were going straight down. Eventually the pilot turned the plane. I am glad I woke up before any crashes!

• Celine Dion calls, and she wants Panera to create an olive-and-Canadian bacon bread to coincide with her new album “Celine Sings Bacon.” You in?: Of course—I bake bread much better than I sing, and I am betting Celine sings better than she bakes.

• The five greatest restaurant innovators of your lifetime: Only one: Scott Davis (Panera’s chief concept officer). He started out as my student … and ended up as my mentor.

• The lobster sandwich strikes me as a bad idea. Why am I wrong?: You haven’t seen the sales figures!

• Lessons learned from Congressman Frank Thompson, Jr.?: No one is unaccountable. Forgetting this often leads to being defined by our misjudgments.