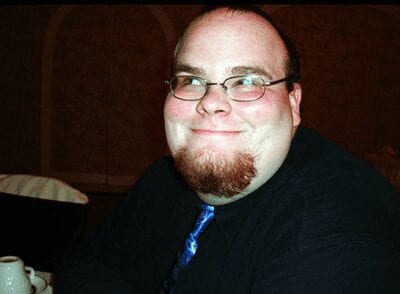 Every so often, a Quaz makes no real sense.

This is one of those weeks.

Which isn’t to say Mike Zwiener, Quaz No. 117, isn’t worthy. Hell, he’s more than paid his dues, having A. Played the immortal “Rudy Zolteck” (aka: requisite loud fat kid) in the 1994 film, Little Giants.; B. Worked at Target; C. Spent his life as a White Sox fan.

In many ways, Zwiener is actually the ideal Quaz. He’s self-deprecating, he has his own IMBD page, he spent 15 minutes in the Hollywood sun and—best of all—he’s cool as hell. These days, 12 years removed from his last theatrical role, Zwiener works as an operations supervisor at FedEx Freight and lives in the thriving metropolis of Midlothian, Illinois. Here, he talks “Little Giants,” crappy Hollywood and why the hell he owns a Jermaine Dye T-shirt.

Mike Zwiener, welcome to the Quaz …

JEFF PEARLMAN: So Mike, I had a reader practically beg me to do a Michael Zwiener Quaz. And here we are. You were a child actor who played “Rudy Zolteck” in “Little Giants,” and then you sorta vanished from the public eye. Easy/tough first question: What happened? Was it by choice? And, now working as an operations supervisor for FedEx Freight, are you happy? Content? Or do you think, “Dang, I could have been Tom Cruise …”

MIKE ZWIENER: Acting wasn’t something I actually wanted to do. I didn’t grow up thinking that I wanted to be an actor, or anything along those lines. I didn’t even want to go to the audition for Little Giants. The audition was in the middle of one of Chicago’s 17-feet-of-snow blizzards (OK, maybe it was just three feet), but when your grandmother says, “You’re going to this!” you go. And it worked out pretty well. It was my first audition, and I didn’t even have an agent, but it worked out pretty well for me.

But when it was over, it was over. Being an actor still wasn’t one of my life goals, so it kind of went by the wayside. My parents got me an agent, I had some auditions, but being the know-it-all 10-year old, it didn’t seem that interesting. So it kind of just stopped. The people I work with now who know (I don’t tell a lot of people about it—it makes me feel like an arrogant prick) wonder why I don’t keep at it. I wonder about it sometimes, then I look at what that town has done to people, and think that, apart from the money, I have a better life than Lindsay Lohan. So I’m OK where I am.

J.P.: There have been dozens of movies about a ragtag gang of kids, and the gang always includes the requisite chubby (no disrespect whatsoever) one who’s always snacking. That was you. While it provided some exposure and movie credits, it also seems to be sort of a mean way to cast a kid. “Hey you, you’re the fat one!” Am I off on this? Were you bothered? Hurt? Or just thrilled to land gigs?

M.Z.: I was 9 and 10 when Little Giants happened, and I really didn’t care if I was typecast. I didn’t even know what that word meant back then. When you look back at it, yeah, it was probably a shitty thing to do, but it happens. Nobody holds a gun to anyone’s head when they offer them a role, as far as I’m aware.

J.P.: You were 10 when Little Giants came out. A. How did you land the part? B. What do you remember from the actual experience? Was it fun? Fulfilling? Boring?

M.Z.: I landed the part  after going to an open casting call in Chicago that my grandmother made me go to. Chicago blizzards are awesome to be driven around in by your grandmother. Four callbacks and a trip to California later, the role was mine.

And it was fun—and boring. I cant remember what I was doing on St. Patrick’s Day last year, but I remember a good deal of the actual experience. It was fun because everyone told me this is a once-in-a-lifetime opportunity, and I guess that stuck in my head. But there was a ton of sitting around. A ton. But looking back at it, I figure making a movie with a bunch of kids could be a bit of a nightmare.

J.P.: We sports writers tend to talk about the great sports films as if they’re works of God. You know, Hoosiers, Major League, Chariots of Fire, Bull Durham, etc. Now that you’re an adult and out of the biz, how would you gauge “Little Giants”? Class film, OK, crap? What’s your take?

M.Z.: I figure it’s an OK movie, but the Internet sometimes says otherwise. I’ve probably only watched it five times in my life. Watching myself makes me remarkably uncomfortable.

J.P.: After “Little Giants,” according to IMDB, you landed three more gigs—your last in 2001? Was this frustrating, or by choice? Did you feel typecast and trapped as “chunky kid who eats a lot?” Did you ever really have a chance to flex any acting muscles?

M.Z.: I don’t have any acting muscles to flex, unless we’re sitting around shooting the shit. Apparently I have the ability to convince people I feel one way when I don’t. I guess I should become a professional liar, maybe public office is my next job.

J.P.: I see many pro athletes who struggle when their careers in the spotlight end. They’re sorta lost, floating around, not sure what to do. Did you go through this as an actor? Is it hard to move on when, at age 15, the well runs sort of dry?

M.Z.: Not at all. When it was over, it was over. But I also didn’t make a career out of it. I wasn’t running around tackling people on Sundays for five years, then have to transition back into the real world, I never left it, so it was easy.

J.P.: I found a WHATEVER HAPPENED TO piece on the Little Giants cast, and it says you spent some time working at Target. My wife friggin’ loves Target, but it always seems like everyone who works there wants to stab themselves with a rusty steak knife. Good place, bad place? Any memorable moments?

M.Z.: You know, I loved working at Target. I was in high school, and money was awesome. But I was also cool with my bosses, so that made it great to work there. I walked in there one weeknight, bored out of my mind, to see my friend who also worked there, and 20 minutes later we were walking out to go cause trouble because I convinced our boss to let him go.

M.Z.: Greatest moment … Jesus, that is hard to answer. I’m fortunate enough to have some amazing moments in my life, like standing up in my best friend’s weddings, being there for the birth of one of their children … I could go on and on.

Lowest moment? Probably the day I looked in the mirror, realized I was 24, I didn’t finish college, and I wasn’t on a career path that made me happy. And if that’s my low point, I really can’t bitch about life.

J.P.: On your Facebook page there are lots of photos of you in White Sox garb (ain’t too many people out there in Jermaine Dye T-shirts), and you played football in a flick. So what’s your athletic background? Are you good at sports? Ever have a grand moment on a field?

M.Z.: I’m not athletic at all (insert fat joke here). I played some football before high school, but never really played an organized sport. And don’t knock J.D.—you can only go to so many White Sox games seeing Konerko jerseys before you feel like a sheep. Not that there is anything wrong with Konerko!

J.P.: Is Hollywood bullshit? Like, does it all seem more glamorous and amazing than it really is? Or is it a land of gold and honey and big breasts?

M.Z.: Eh, I wasn’t there long enough at an age where I could figure that out, but if I had to put money on it, I’d put $20 on it being bullshit.

• Celine Dion offers you $3 million to play “Rudy Zolteck” in her nightly Las Vegas show, “Celine Vs. Little Giants.” The catch is—it’s 362 days a year, you’re completely naked and you have to sing Hall & Oates’ full catalogue of material. You in?: Nope. I’m sure I can command a bigger payday to keep my clothes on.

• Five all-time favorite Chicago sports figures?: Dude, I dont live in Oklahoma City. Chicago is the wrong city to only have five. So you’re going to have to crop this list if you only want five. 1. Mike Ditka; 2. Mike Singletary/Walter Payton; 4. Michael Jordan; 5. A.J. Pierzynski—Yeah, he’s not in Chicago anymore, but he’s still a favorite of mine. We’re the same kind of asshole; 6. Carlton Fisk; 7. Dustin Byfuglian. Also not in Chicago anymore. When a friend got me into hockey I think the actual words out of my mouth when we were watching a game were “Who’s the big jackass shitting on the other team’s hopes and dreams?” Liked him since then. Too bad he’s in Winnipeg.

• In 1996 you played “Young Fang” in something called “Big Bully.” Please explain …: That was a role to play a young Tom Arnold in a movie that did not do well … at all. Not much screen time—probably 15 minutes total. But it was three months in Vancouver, so it was still fun.

• Ever thought you were about to die in a plane crash? Please elaborate, if so: I can’t say I have, but I do have a re-occuring nightmare about being blown up in an airport.

• Can a really, really, really hot woman still be sexy midway through a loud fart?: Yes. Mila Kunis can be sexy while ripping the head off a kitten.

• Best joke you know: The best jokes I know will get me fired, or arrested.

• If you could ask Shawon Dunston one question, what would it be?: “Who the hell are you?” I had to Google the name, saw he was a Cubs player, then instantly closed that tab in my browser.