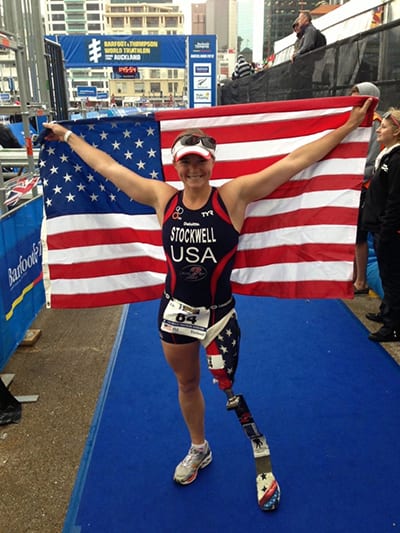 To be blunt: This ain’t the most detailed of my 124 Quazes. I e-mailed Melissa the questions, and she responded kindly and appropriately. Her replies are not especially long. And yet … they speak volumes. Read Melissa’s words, and tell me who better to look up to? To admire? In 2004, while leading an Army convoy in Baghdad, Stockwell became the first female soldier to lose a limb in the Iraq war when a roadside bomb exploded. She was given a bronze star and Purple Heart—and then (instead of vanishing into the abyss) competed in three swimming events in the 2008 Summer Paralympics. She proceeded to turn her attention toward triathlons, and—according to Wikipedia—is “a multiple U.S. National Paratriathlon Champion in her classification,and was named USAT Paratriathlete of the Year in 2010 and 2011.

In other words, she took a tragedy, and turned it into a triumph.

Here, Melissa talks about what it is to lose a limb; how goodness can emerge from darkness; why she chose to serve her country and why she think Bo Bice deserved to place second on American Idol. You can follow Melissa on Twitter here, and visit her website here.

Melissa Stockwell, it’s an honor to welcome you to the Quaz …

JEFF PEARLMAN: Melissa, through the years you’ve spoken very courageously and profoundly about moving on after losing a leg. But I’m actually fascinated by the moment you first learned what happened. It’s 2004, you’re in the hospital—what was it like, being told your left leg was gone? How did you absorb, process and ultimately accept the news?

MELISSA STOCKWELL: It’s been nine years so my memory might be a bit off. What I remember sounds cheesy, but I remember knowing that it was going to be OK. I was happy it was me and not another one of my soldiers because I knew I was strong enough to get through it. I remember thinking that my support system with my family and friends would get me through the tough times and that life would go on.

J.P.: Here’s what I know—you’re from Grand Rapids, Michigan, you attended the University of Colorado, your lost a leg, you’re a dazzling athlete. Here’s what I don’t know: How you got here. Melissa, how did you get here? Why did you join the military? What sort of athlete were you growing up? How did you go from there to here?

M.S.: Technically, I was born in Grand Rapids, but lived there only briefly. I moved from there to England, to Georgia, to Minnesota and then college in Colorado and into the military. I joined the Army because I love our country. Plain and simple. I was a gymnast growing up and dreamed of the competing at the Olympics. When I lost my leg and found out about the Paralympics it was like I had a second chance. To represent a country I had defended over in Iraq. I couldn’t think of anything better. So I swam my heart out and made the 2008 Paralympic team and competed in Beijing. After, I turned to triathlons, and have swam, biked and run my way onto podiums around the world and am a three-time Paratriathlon World Champion. I live a life of sport and wouldn’t have it any other way. Check out the Paratriathlon club I helped found here in Chicago.

J.P.: I’m always fascinated by Iraq war veterans because—just being 100% honest—I feel like it didn’t have to be this way. We weren’t attacked by Saddam after 9.11; Iraq had 0 to do with the Trade Centers. It was, in my opinion, a war of choice … and now many are dead, you don’t have a leg, etc … etc. In your blog you refer to yourself as “non-political,” but I’m wondering what’s your take on this? Do you disagree with me? Are you at all angry? Were you ever angry? None of the above?

M.S.: It’s an all-volunteer Army. I signed up knowing there was a risk of going to war and that risk became a reality. If I were to be angry, I could only be angry at myself. But I choose not to be, I live a good life.

J.P.: Along those lines—I recently watched a documentary about the pink breast cancer ribbons, and how many of the corporations “going pink” are solely interested in PR; how many breast cancer sufferers find the whole, “We support the fight!” brigade sort of, well, irksome. I’m wondering—you fought for your country, yet very few children of privilege, children of politicians follow suit. Does this ever enter your mind? Come into play? When you were fighting in Iraq, did you ever think, “Yeah, the support and yellow ribbons are nice, but how about enlisting, too?”

M.S.: No. People make their own decisions in life and have different passions. My passion was my country and I chose to serve. We need those on the side supporting us as we do that. I am just thankful we live in a time where we have the support. It makes coming back home and returning to life that much better.

J.P.: You were the first Iraq veteran chosen for the Paralympics, and you competed in three swimming events, the 100 m butterfly, 100 m freestyle, and 400 m freestyle, at the 2008 Summer Paralympics. That’s amazing. How hard was it to train your body to perform at a high level without one leg? What was the process like? Did there come a point where it became—and now is—second nature?

M.S.: My training was similar to that of an Olympian, the only difference being that I am missing a leg. I swam thousands of laps in the pool, learned to love the smell of chlorine and saw my times gradually improve. I don’t think my training was any easier or harder than someone with both legs. Swimming can be mostly an upper body sport, especially with the strokes I did. I love the water, it makes me feel whole.

J.P.: You’re a triathlete. Most of us are not, and many probably think one putting his/her body through such pain is crazy. So tell me, Melissa, what is it about the triathlon that draws you? How would you explain the love and desire to compete through such hell?

M.S.: It’s really not hell. It’s a little swim, a little bike and a little run—it just happens to all be at the same time. I love the challenge of all three sports and the variety of training for them all. I’ve always been one to enjoy a challenge and a triathlon is no different. The thrill of the finish line and proving to myself that I can do such a thing, keeps me going.

J.P.: Melissa, I’m a wimp, in that I fear death. I really do, and I hate that about myself. I’m wondering, having been on the front lines, how you feel about death? Does the inevitability worry you? Do you think about it? Care?

M.S.: I like to live in the moment, day by day. There is no sense in worrying about something that will happen regardless of if we want it to or not. So no, I don’t think about it.

J.P.: You were medically retired from the Army in April 2005 with a Purple Heart and bronze star. I’m wondering what these honors meant to you, and how did you find out you’d won? As we speak, where are the awards? Closet? Display case? Bank vault?

M.S.: Purple heart and bronze stars are earned, not won. You really don’t want to be out there competing for one. Anyone that is injured while in combat receives a purple heart. The bronze star is for someone whose gone above the call of duty. I was surprised on that one as I just counted myself as being in the wrong place at the wrong time.

They are currently displayed in my house.

J.P.: How do you think America treats its troops these days? Are we doing enough? Are there areas where we need to improve? Also, does walking up to a soldier and saying, “Thanks for your service?” matter? Or does it come off as clichéd and trite?

M.S.: Saying “Thank you for your service” to a veteran is always the right thing to do. It never gets old. I feel so fortunate to be part of an era where America appreciates and thanks the troops. Whether or not someone believes in the war, they seem to always believe in the troops which is what matters most.

J.P.: It’d be a made-for-TV-movie cliché line for you to say, “I’m better off having gone through what I did in Iraq.” But I’m wondering—are you? Has it somehow made you a better person? A more compassionate or understanding  or … whatever person? How did it change you, and your life course?

M.S.: On April 13, 2004, my life changed in a positive way through a tragedy. I have become a better person who appreciates life. A new career, athletic opportunities and meeting people who are my very best friends. It changed my life course in every respect but I’ve done more with my life with one leg than I ever did with two.

• Coolest thing you experienced during your time in the army?: Seeing the wounded vets at Walter Reed overcome their injuries.

• Five things you always carry with you?: Chapstick, my phone, wallet, gum and my dog. A service dog. And the best one around.

• Greatest myth about prosthetic legs?: They can’t cook me dinner.

• Would you advise your children to enlist in the armed services?: Yes, if they loved their country:

• Should Pluto be classified as a planet?: Yes. Why discriminate just becasue it’s small?

• One question, if given the opportunity, you’d ask Rey Ordonez?: Wanna have a handstand contest?