Have a beautiful day 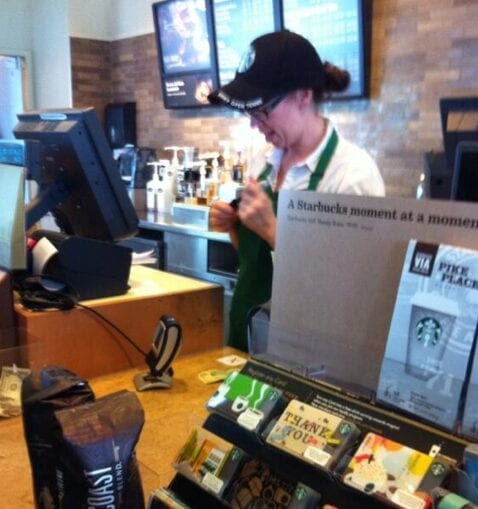 I’ve spent the past few days working out of a Ft. Lauderdale Starbucks. It’s a nice place with big windows and an ever-changing flow of people.

This is where I came upon Amy.

That’s what he name tag says: AMY. In cheerful letters. She’s not the manager; merely a barista who works 25-to-30 hours per week. I’ve never, ever, ever seen anyone like her.

Two days ago, I bought a bagel with cream cheese. I don’t call how much the thing cost—maybe $3.50ish. Anyhow, when Amy handed me the bagel, she apologized that the store was out of cream cheese. “I gave you two butters,” she said. “I hope that’s OK.” It was perfectly fine.

Maybe five hours later, I returned to the counter to purchase a fatty Mocha Frappa Somethin’. The drink ran about $5. As I ordered, Amy interrupted me. “I’ve been thinking about the cream cheese and the bagel,” she said. “I charged you for cream cheese and didn’t have it, but you paid with a card and it was complicated and …”

Amy is a bundle of Starbucks joy. She tells most customers to, “Have a beautiful day!”—and she seems to genuinely mean it. She’s quick and sharp and intuitive. Chatty without being annoying. She’s from Buffalo, and speaks with a quirky Western New York accent that’s endearing. Were I opening a store—any type of store—and I needed a manager, or a face of the business, I’d make Amy an offer she couldn’t refuse.

Oh, one more thought. I’m usually this irked skeptic, but something about the words, “Have a beautiful day!” resonate with me. Maybe, just maybe, by uttering them, the day does become a tad more beautiful.

PrevPreviousWe have a contest winner
NextFirst Showtime review …Next