So funny I forgot to laugh … 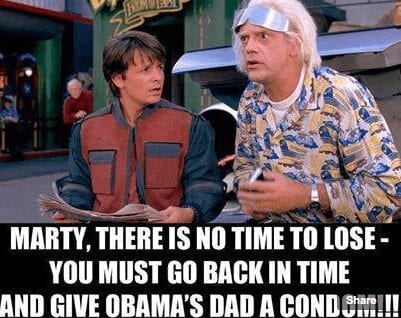 Back when I was a kid, growing up on the mean streets of Mahopac, N.Y., kids would respond to dumb jokes with, “Yeah, that was so funny I forgot to laugh.” It was a pretty powerful retort. You’d stand there, feeling dumb, awkwardly slinking away.

Yesterday evening my friend forwarded me the above meme. He’d told me about a couple of conservatives who routinely passed on pretty awful anti-Obama material, and I said I’d like to see something.

To be blunt—I was very disappointed.

This isn’t smart or clever. It’s also not particularly offensive or witty. It’s just dumb. And boring. And unoriginal. It’s something some 70-year-old conservative who doesn’t want the government touching his guns or his money passes on to 100 friends, thinking it’s perfectly worded and sharp as a knife.

Back when George W. Bush was president, liberals went off with similar nonsense. People would post stuff on Facebook—and it was never, ever funny. My aunt used to e-mail me these lists—100 REASONS GEORGE W. BUSH IS SMARTER THAN A DOG—and I’d immediately press delete.

Just do it well.