Pearl, Garner and the lesson that stuck 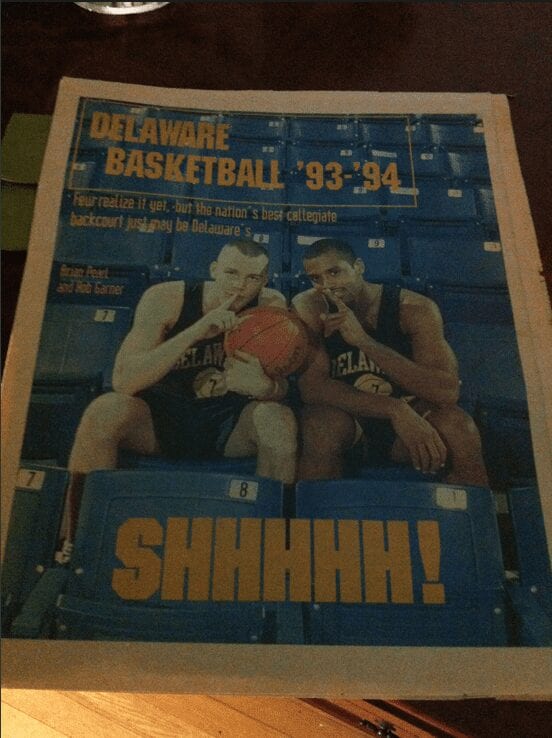 Was digging through some dusty bins the other day, came across the above newspaper pullout.

It’s from The Review, the University of Delaware’s student newspaper, and dates back to 1993, when I was a senior and editor in chief. Even though I sorta ran the whole paper, I still kept my hands heavily in sports. Hence, the decision to do a special pull-out section for the upcoming college basketball season.

Although the Blue Hens were coming off back-to-back NCAA Tournament appearances, they were heavily depleted. Spencer Dunkley—gone. Sweet Wright—gone. Kevin Blackhurst and Rick Deadwyler—gone. The one thing they seemed to have going was a killer backcourt, featuring Brian Pearl (left in the photo) and a Texas transfer named Rob Garner.

I’d heard so much hype about Garner, and Pearl was one of the conference’s two or three best players. Hence, I came up with the (ridiculously unoriginal and trite) idea of “The nation’s best collegiate backcourt just may be …”

The two guys posed for the photo, the issue ran, I was happy.

I was looking for jobs, and I sent a bunch of clips to Mike Freeman, the former Delaware journalism star who was covering the New Jersey Nets for the New York Times. One by one, Mike kindly went through each article, praising the good, delicately explaining the bad. It was a master’s course in writing, and I absorbed it all.

Of all the etchings, his most important—and most lasting—words came with the Delaware cover. He attached a small piece of white paper, using a paper clip, and wrote something along the lines of: “Kansas, Kentucky, UCLA, Alabama, Auburn, Duke, North Carolina, Washington, Oregon … there are 100s of schools that have better backcourts. Don’t be a home-team fan for the sake of being a home-team fan …”

The words weren’t rude, but they were jarring—and vital.

Don’t be a homer.