The letter that broke my heart 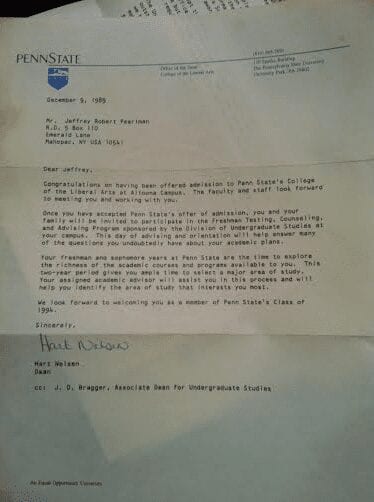 Because we’re moving, tons of old crap is popping up all over the house.

Ah, the ol’ letters. The wife discovered them tonight, tucked in an envelope. Back in the winter of 1989, I applied to about 10 colleges, ranging from Miami to Syracuse to Albany to UMass to Delaware. The place I really wanted to attend was Penn State.

It was, I say with no exaggeration, my dream school. Huge campus, awesome sports, excellent media/journalism program. Were I to be admitted (and I presumed I’d get it), Penn State would be the spot for my four years. No doubt about it.

Then, the above letter came.

It started off great: “Congratulations of having been offered admission to Penn State’s College of the Liberal Arts …”

Um, what? Altoona? Where the hell was Altoona? I probably looked on the map, but lord knows I wasn’t going to spend two years in a remote outpost, feeling like a second-rate Nittany Lion. At first, I was heartbroken. Then, belligerent. I was an A- student! I’d scored a solid 1130 on the SATs! I was editor of the high school newspaper. Well, sports editor of the high school newspaper. But … still.

I’m sure I cried, and definitely complained. But here’s the best part—it proved to be a blessing. When I was rejected by Penn State, I turned to Delaware. A school with an amazing journalism program; with tons of writing opportunities; with a fantastic campus and tons of female students (hey, just being honest).

Twenty five years ago, I was thinking, “Altoona—fuck Altoona.”

In 2014, I thank goodness for its existence.

PrevPreviousThe Bee Crusher
Next“It makes you wonder if …”Next