Am sitting in a $72 Quality Inn room in Flagstaff, Arizona, alongside the quirky and admirable Robyn Furman. Who, for the record, just asked, “Do you miss the Wyndham?”

It’s been a remarkable four days, filled with long drives and weird stops and banter, banter, banter. We woke up this morning in Amarillo, Texas, stopped at a Starbucks, started driving toward Santa Fe, stopped again at Mesalands Community College (truly, home of absolutely, positively nothing—but still bought some T-shirts!), reached Santa Fe, ate lunch, walked around, hit up a Jiffy Lube for an oil change ($53? WTF?), headed down to Albuquerque, had dinner with Jay and Barbara, debated what to do next, debated more what to do next, debated more what to do next—then sorta said, “Eh, fuck it” and drove FIVE hours here, to Flagstaff. Through a major lightning storm. With crazy rains. And a rest station that doubled as a murder scene.

So why are we here? Well … um … eh … I’m not 100 percent sure. But we plan on hitting the Grand Canyon tomorrow, then Las Vegas tomorrow night, then Los Angeles and the land of dreams. Or something like that. 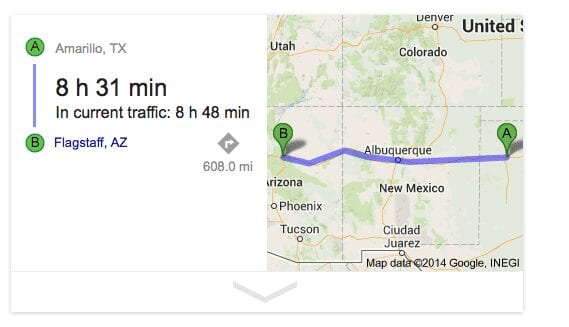 By this point, Furman and I have discussed a-b-s-o-l-u-t-e-l-y everything. Proof? A few minutes ago, we were going hard core on Diff’rent Strokes trivia. I struck first by asking Furman to name Arnold Jackson’s girlfriend on the show. Pathetically, she didn’t know the answer—Lisa. She countered by breaking out a staggering Mary Ann Mobley reference, and I …

This needs to be repeated: Robyn Furman, who doesn’t always recall where she left her keys, was able to name the actress who played Phil Drummond’s wife. Which would be crazy in and of itself, but Mobley played his wife after the first (and significantly more famous actress), Dixie Carter, left following a mere 27 episodes between 1984 and 1985. Hell, I’d plunk down a $100 bet that Mobley—now 75 and out of the business for two decades—doesn’t even remember she was Phil Drummond’s second wife. Let’s make it $200.

What’s my point here? I don’t know. I’m high on life. Otherwise known as four or five sodas, a box of Good & Plenty, a lengthy debate with Furman over wedding gifts and the stale Room 234 scent of mildewed cardboard.