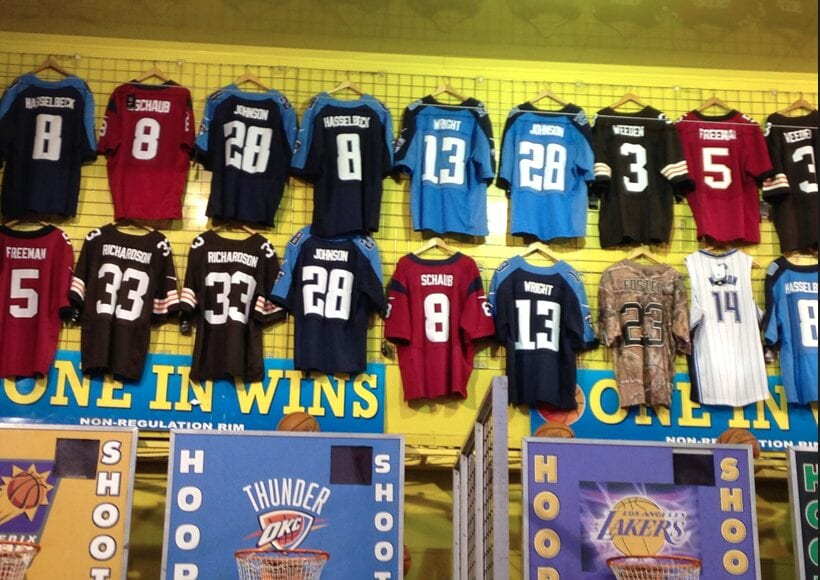 So last weekend we took the kids to the Los Angeles County Fair, which was amazing. There were rides and deep-fried cookies and exhibits and musical performances and … and …

… my favorite thing was the basketball shoot game.

And even more sports jerseys!

They were everywhere. Bright colors. Bold numbers. Stitched-on names. Why, I can picture a young boy, maybe 13, excitedly sinking a shot as his girlfriend stands by. He’s euphoric. He’s speechless. He can’t believe, for only $5, he gets to pick such an amazing, outstanding, one-of-a-kind prize.

And then he looks.

I mean … what do you do? You’ve won the prize, but every single jersey is a discarded piece of crap—obsolete, obscure and rejected after 11 months of languishing on the Marshall’s clearance rack. You’re never gonna wear that sweet Matt Hasselback Titans jersey (who came up with the idea to even make this available?). You certainly wouldn’t walk through the middle school hallways decked out in Jameer Nelson Magic duds. Yeah, Chris Johnson was a pretty special NFL halfback … four years ago.

So—head down, dreams discarded—you moan to the carny, “Just gimme a brown one.”

And your dog Miffy has a new bed.