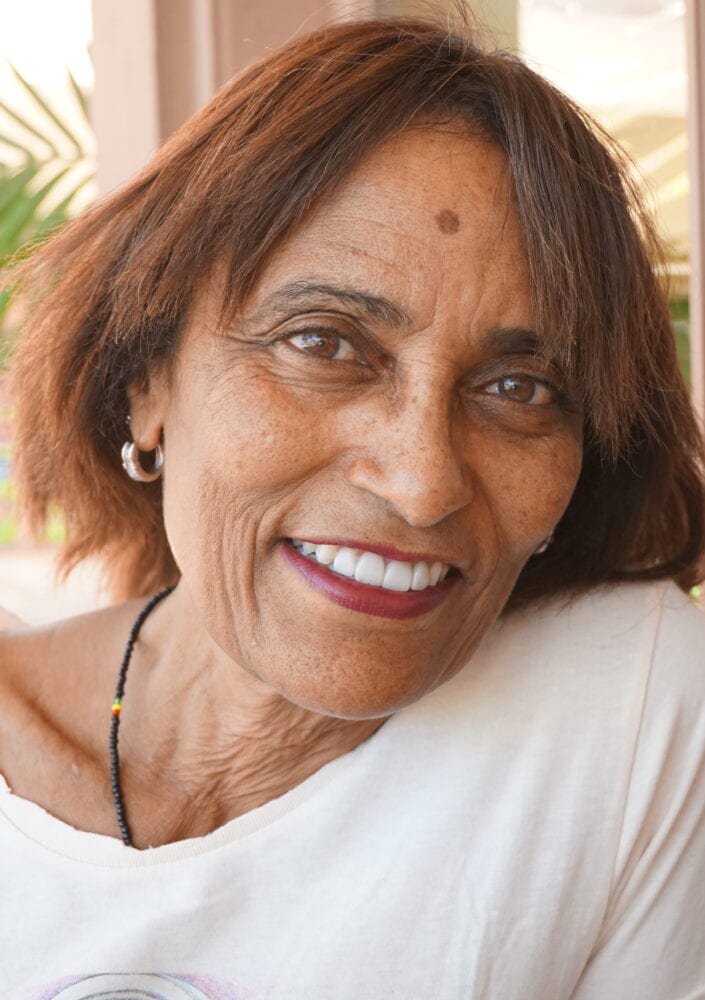 The woman in the above photograph is named Wossene Bowler.

I took the image, oh, four or five weeks ago, while sitting at a table outside New Awakenings, Wossene’s wonderful coffee shot/restaurant here in Laguna Niguel.

At the time, New Awakenings was my joint. Though I was a California newbie, I worked there four or five times, and absolutely loved it. The drinks were spectacular, the food was dazzling. Wossene was gracious and hospitable, and when I told her I’d likely sit inside for long hours, she replied—half kidding—”You want to sleep here? I’ll give you the keys.”

Anyhow, Wossene and I chatted quite a bit, and her plight is astonishing. She is an Ethiopian immigrant who, long ago, faced a life-or-death fight with leukemia—and somehow won. Since that time, she’s made it her life mission to raise money to open up a cancer hospital in Ethiopia, where such facilities don’t really exist. She realized how lucky she was to be living in the United States, and wanted others to share her fortune. Hence, coffee. Wossene decided her best avenue was to peddle coffee, and donate a huge chunk of the proceeds to the dream of a new medical facility.

So that’s what she did. She opened New Awakenings, made amazing Ethiopian food and coffee, set cash aside, dreamed the big dream … and struggled terribly.

As Wossene told me, coffee shops are hard. Like, really hard. The hours are ceaseless. Most folks only spend a couple of bucks. You’re always digging for new ideas, new promotions; always fearing a Starbucks or Dunkin’ Donuts opening around the corner. She said she was having big problems, and needed a partner or some donors to keep the train moving. “I know this can work,” she said. “I just have to have more backing …”

I told her about my website. About The Quaz. “Maybe you’d like to do it,” I said. “It’s a good platform, and you’re fascinating.”

She excitedly agreed. And, in my heart, I knew it was probably too excitedly. I get a large number of page views here, but the odds of someone reading a Wossene Bowler Quaz and saving her coffee shop? Not particularly strong.

Anyhow, we sat down and did the Q&A. She was wonderful and funny and hopeful and heartbreaking. I snapped a few pictures. “Please have it run as soon as possible,” she said. I insisted I would.

What happened? Life. Book reporting. Kids. This. That. Our interview was about 1 1/2 hours, and when I started transcribing the tape, it was hard to decipher. Wossene’s voice was soft. The background noise was loud. Lots of muffles and slurring. I told myself I’d get back to it. I never got back to it. It weighed on me, then faded. Then I sort of forgot about it. I discovered other coffee shops (I like diversifying). By the ocean. Cool views. No lingering Quaz guilt from the owners.

Two days ago, while walking my dog, a neighbor said, “Did you hear about the Ethiopian coffee shop?”

Just went to New Awakenings’ Facebook page. This was the last entry … 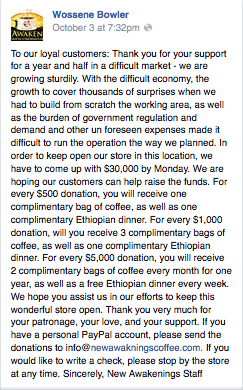 I feel awful. I should feel awful. I let a good woman down. No, a saintly woman down. I got caught up in life, forgetting the real values of life. Helping people. Aiding. Assisting. The whirlwind consumed me, and I failed to plant my feet and remember Wossene Bowler.

I’m finally writing about her, and it’s far too late.