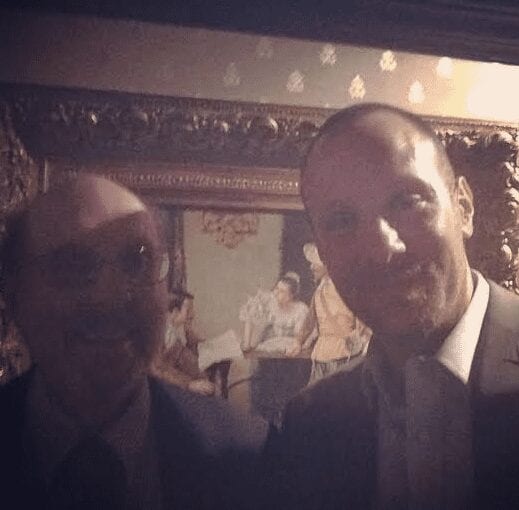 So two days ago I MCed an event in New York City. It was hosted by Thuzio at a Ruth’s Chris, and featured Ron Darling and Mookie Wilson talking about the 1986 New York Mets.

Because I wrote The Bad Guys Won, I was asked to moderate. Which was thrilling and cool and awesome. I sat in front of the room, alongside two terrific guys (Mookie and Ron), digging into a subject I absolutely love. I can’t overstate this: It was wonderful.

But Mookie be damned and Ron be damned, the best part was having my dad, Stan Pearlman, there for the experience

My dad is one of my all-time favorite people. He’s obviously a father figure, but also a super-close friend and confidant. He’s a fantastic writer who used to have a regular newspaper column, so he understands the hell that is paper and pen (or, I guess, laptop and fingers). My dad was my hero as a kid, and he still is. No exaggeration.

I can’t explain this well, but there’s something gratifying in having a parent see you do something cool. I mean, nobody’s there when I write. No one comes along to TV appearances, stuff like that. But as I sat alongside the two former ballplayers, I kept looking at Pop, who was looking back at me. When I see my kids do neat things (my daughter’s plays, my son’s science experiments, etc), I fill with pride. And, I think, Dad did, too. Not that I was an overwhelmingly good moderator, or that sitting in a Ruth’s Chris before 50 strangers is any major accomplishment.

It’s just, um, the need for parental approval; the desire to have your folks (no matter how old you are) feel like they’ve done you well. Or, really, that you’ve done them well.

Oh, almost forgot. The best part: Dad knows shit about sports. I’m pretty sure he knew Mookie Wilson was a baseball player. Ron Darling—not so much. Before the event, I offered Dad some lessons on how to bullshit your way through sports conversations. Then I put him to the test. During a cocktail hour, we chatted up a lovely guy who writes blog posts about the Mets. I told the guy how Dad is an enormous Dodgers fan, to which the writer said, “So it was rough lately?”

My dad paused, shrugged and said, “Well, it is what it is.”