The comb and the toilet 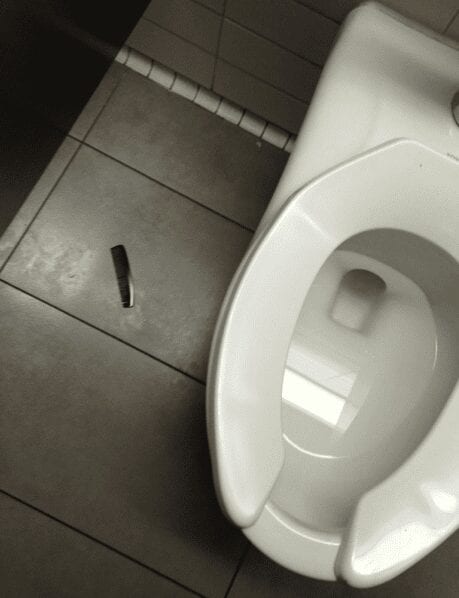 I know I’m bathroom obsessed, but I’ve never seen this before: A comb alongside an airport toilet.

Just witnessed it, about 10 minutes ago. Wondering what transpired. I mean, I can picture it slipping from a pocket midway through a fierce bowel movement. But wouldn’t you hear the plastic hit the floor? Surely, it’d make some sort of noise, no?

Which makes me wonder whether the comb was left there deliberately. Perhaps the pooper saw it on the floor, thought, “Dang!” and walked off. Maybe he just didn’t want to use a comb that spent some time kissing the floor of an oft-used, somewhat-clean-but-not-too-clean bathroom. Maybe the comb was a freebie that didn’t mean too much, and he just figured, “Eh, fuck it.”

But … what sort of man leaves a comb on the floor? Even in this circumstance? By doing so, you’re basically saying, “Yeah, it’s my comb. But I don’t wanna deal. So I’ll just leave it for the poor schlub making $9 an hour to clean the bathroom floor. He’ll take care of it.”

Which, of course, is a horribly dickish approach to life. I mean, we’re supposed to be the nation of personal responsibility, and doing for oneself. It’s a horrid way to treat others. Absolutely horrid.

Of course, maybe the comb fell and the owner just didn’t notice.