Too busy to listen, too self-occupied to care 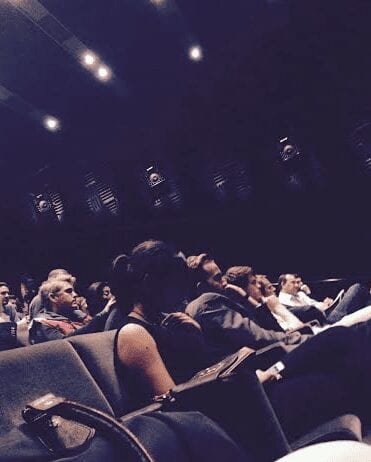 The woman in the above photograph was positioned two seats away from me earlier this evening.

And it’s not about her. It’s about society, and what we seem to be turning ourselves into.

I digress. The wife and I traveled to Los Angeles to attend a movie screening—a haunting, touching, crushing movie screening. The film, titled “Happy Valley,” concerns the sexual abuse scandal that took place at Penn State a few years back. It’s a documentary that features, among other things, the heartbreaking saga of Matt Sandusky, the adopted son of Jerry Sandusky and a victim of sexual abuse. I can’t say enough good things about the work of filmmaker Amir Bar-Lev, and I can’t say enough good things about Matt—who attended the event, then stood before an audience of, oh, 150 people and took one question after another after another.

Which is where the woman comes in.

And the woman checked her phone.

We were in clear view of the man. He was there. We were here. And, somehow, she didn’t care. Didn’t show an ounce of interest.

But, really, this is who we have become, and I’m not sure why. Slaves to our phones. Slaves to immediacy. Last weekend, I attended a Bat Mitzvah in New York. It was as fun as could be—killer DJ, amazing food, a photo booth, a basketball game, prizes. On and on and on. I’d say, oh, 80 percent of the kids in attendance spent the majority of time on their phones.