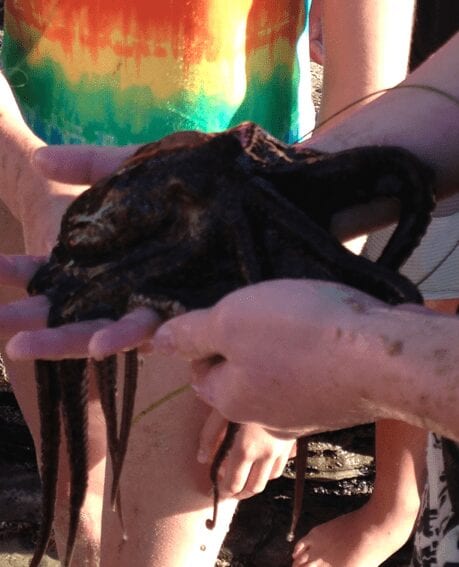 When, truthfully, we’re not different.

Perfect example from today. The family and I visited nearby Newport Beach, one of the most beautiful stretches in the world. I was climbing along some rocks with my kids, tiptoeing through the shoreline, when a couple of kids came across a tentacle reaching out from under a rock. “What is that?” I asked.

“An octopus!” one responded.

I walked on over, and the boys were shoving a large stick beneath the rock, trying to dislodge the creature. I was mesmerized, fascinated, riveted—and I applauded their efforts. “You’re getting it!” I bellowed. And, indeed, they got it. Before long the octopus—having ejected ink as a warning signal—was being held in the arms of one of the boys.

Only it wasn’t nice work. It was friggin’ cruel, and I can’t believe I stood there, supporting the efforts. The octopus was merely chilling, trying to live its life. No argument could be made on behalf of he boys or the stick.

Put different: I had a dick moment.

This doesn’t mean I’m a dick. But were one to judge me based off of that five-minute span, he would assume (perhaps rightly) that I’m a heartless asshole and an endorser of cruelty to animals.

I cheered on the bludgeoning of an octopus.