I am speechless today.

A few minutes ago I heard the news that no criminal charges will be brought against the police officer who, this past July, placed Eric Garner in a chokehold and held it until he died.

In case you missed this one, Garner was a 43-year-old Staten Island man who was approached by an undercover cop. The officer apparently suspected Garner was peddling illegal cigarettes, and ordered him to raise his hands in the air. Garner replied by saying, “I was just minding my own business. Every time you see me you want to mess with me. I’m tired of it. It stops today!” He then lifted his arms, nonviolently, and was immediately placed in a chokehold …

… until he stopped breathing and died.

He no longer exists.

Garner, of course, was black. I say of course because—and I’m using capitalized letters on purpose—THIS SHIT HAPPENS TO BLACK PEOPLE ALL THE TIME. ALL. THE. TIME. And it’s sickening. Fucking sickening.

I immediately took to Facebook to vent, and wrote this … 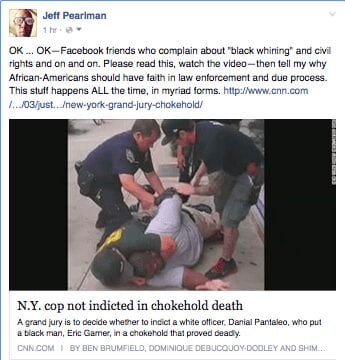 And then I got a response that made my eyes pop (not literally). I will protect the man’s identity, but he wrote: “Because they live here. You don’t think African Americans should have faith in law enforcement and due process? That’s messed up man. A lot of people gave their lives for that process, it’s not perfect, but it should be respected by everyone – except the criminals of course.”

Then I got another response that made my eyes pop (this time, literally): “We are not taking about a first offender he was arrested 36 or so times. And was hold by police that he was under arrest and refused to put his hands behind his back. The man was twice the size of the cop. It is tragic that the man died but not the cops fault.”

There you have it.

You wanna know why African-Americans will never receive equal treatment in this country? You wanna know why a large number of whites will never have the requisite empathy and sympathy needed to bring forth genuine societal change? Because we’re selfish. And sheltered. And if it’s not happening to us, we don’t really care. Oh, we pretend we do. We talk and talk, we look saddened, we listen intently as black co-workers and friends of friends of friends speak sadly of tragedies like Ferguson and Staten Island. But, deep down, many whites I know don’t give a shit. They want to watch TV, have a hamburger, tuck in their children and feel safe.

They don’t view this as a societal problem. It’s a black problem. A “them” problem. Maybe it’s justified, maybe it’s unjustified—but, either way, it doesn’t concern many whites. They don’t want people dying at the hands of cops, but when it happens to black people, there’s a reason. He was selling illegal cigs. He pushed a convenience store clerk. He walked in the middle of the street.

I’m so fed up and sickened. Ideally, the above video should serve as the ultimate unifier. We have theories as to what Darren Wilson did; we have ideas and suspicions. But there’s no smoking gun. Well, here, above, is your smoking gun. A man died for the suspicion of selling cigarettes. He was placed in a chokehold until he could no longer breathe, and his life expired.

And, once again, the police walk off into the sunset …

PS: And when the rioting inevitably happens, and the marches begin, I don’t want to hear people talk about unruliness and savages and a lack of respect for law. If law doesn’t respect a people, why should the people pay it any mind?

PPS: And this isn’t a black issue. It’s a human issue. And I’m human. So are you.