Walking Away from Jimmer 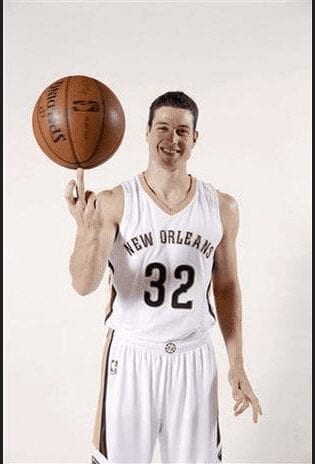 I have been a journalist for a good chunk of time.

I landed my first job, at The Tennessean, in 1994, and started work about a week after college graduation. In those 20-plus years, I’ve had an absolutely charmed career. I wrote for my dream publication (Sports Illustrated), I roamed the streets seeking out 3,000 word profiles (Newsday), I got paid to be a columnist (ESPN.com), I’ve written six books. I’m not saying any of this to brag—we all have dreams, and one isn’t greater or more respectable than the other.

But this is my dream career, and I’ve been fortunate enough to live it.

With those years, however, has come a (understandable, I think) change in perspective. For example, back when I was a young baseball scribe at SI, I stood by a pitcher’s locker and waited and waited and waited and waited for him. His name was Tim Worrell, and he told me he’d be with me “after I’m done.” What was he doing? Reading a copy of Field & Stream. In, oh, 1998, I had little pride and lots of fear and insecurity. I probably stood there for 30 minutes, knowing Worrell was testing/fucking with me, but feeling no other option. Nowadays, I’d simply walk away. Not because I’m any better than anyone else. I’m not. It’s just because, well, I understand the value of time. Not merely Tim Worrell’s time (I’m using him as the guinea pig here. He’s probably a nice guy who just had an off day), but my time. Life passes too quickly to be belittled and/or marginalized by ballplayers (or anyone). They’re no more important than I am. I’m not more important than they are.

I digress. These days, along with writing books, I do a monthly-ish long-form sports feature piece for Bleacher Report. It’s been an absolutely awesome experience. Like, probably the favorite article run of my career. It’s allowed me to do stuff like this and this and this, and work with Bill Eichenberger, one of the top editors in the field. The process is quite enjoyable: I pitch a bunch of ideas, Bill brings forth a bunch of ideas. We talk, debate, talk, debate—then decide what we’re going with. Again, it’s been blissful.

Anyhow, about two months ago I pitched the saga of Jimmer Fredette, the former BYU supernova who’s now languishing on the fringe of the NBA. As most people here surely remember, Fredette emerged from nowhere upstate New York to become a legitimate college basketball icon. He was Pearl Washington. He was Bo Kimble. He was Adam Morrison and Steve Alford and Pistol Pete. In short, he stood as a genuine phenomenon … and now he’s averaging 1.8 points per game at the end of the New Orleans Pelicans’ bench.

I love, love, love sagas like this one. There are a ton of elements to it (race, expectations, unrealistic college numbers, hopes and dreams, excitement-turned-indifference), but what really had me was the adjustment. What is it like going from HERE to here? Mentally? Emotionally? Physically? Do you still believe in your greatness? Do you chase what you were? By all accounts, Jimmer Fredette is a wonderful, positive, decent young man—which makes it even better. He doesn’t seem to brood or pout. He just puts his head down, plays, fights through. Again, I love the saga. Love it.

Bill Eichenberger agreed. Originally I planned to fly to New Orleans to sit with Jimmer, but then I saw the team was coming to Los Angeles for three days to face the Clippers and Lakers. I reached out to one of the team’s PR guys (who was, for the record, nothing but polite and responsive), told him what I do (long, detailed features) and asked if he thought it possible. The answer: Yes. I could get Jimmer after the team arrives at the Ritz Carlton yesterday evening.

I was supposed to meet Jimmer at the hotel at 5 pm. En route, the PR man texted me, saying the plane was late, they’ll arrive around 6. No problem—more time to think about the interview, go through more notes.

At 5:30, I received a text, asking, “How long can I tell Jimmer to expect for the interview?”

I requested 40 minutes. It’s actually an old journalism trick—you request 40, you take an hour. But even 40 would be decent. I also planned on attending tonight’s Clipper-Pelican game; surely I could get more time beforehand. I mean, on a so-so team with one megastar (Anthony Davis), it’s not as if Jimmer is drawing excessive media attention (I don’t mean that snidely. Just factually). Matt, the PR man, responded, saying, “That might be a little long tonight. Can we say 20-30?” He said Jimmer had plans with friends.

I told him, “I’m not exactly in a position to bargain” and I’d appreciate any time I could get. I also noted that I’d be at Pelicans-Clips.

He added Jimmer could probably give me a few minutes of post-game attention.

And then, for a moment, I sat there. 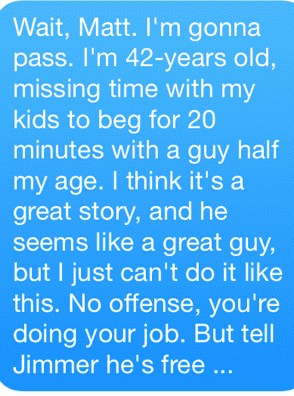 And that was that. No Jimmer. No Pelicans. No story.

And I felt … great. I really did. I left the building and found my wife and kids—who were nearby eating dinner before attending the Jingle Ball concert at Staples Center. The wife was a bit confused, and I explained to her my feelings. Which I can express thusly: This was nothing against Jimmer Fredette, and nothing against Matt. They did zero wrong. Neither man owes me or Bleacher Report a thing. They truly don’t. But I’m at an age, and a point in my life, where I aspire to write features about either people who want to be featured and are willing to devote good chunks of time; or people whose lives are so fascinating and riveting that I’ll take a month to dig, dig, dig, dig, dig. (Exhibit A: Willie Williams).

To the Pelicans and Matt and Jimmer, this was just another guy doing another story. And, to them, that’s accurate. But not to me. I want to explore and dig and delve and research. No, it doesn’t always work out. But I at least want a puncher’s chance.

And 20-30 minutes with Jimmer Fredette wouldn’t be nearly enough.

Anyhow, here I sit. And I know what the response (from some) will be: Who the fuck are you? Do you realize how fortunate you are? So many people would beg to sit down with a guy like Jimmer! You’re living the dream! Get some perspective! I do [FILL IN THE BLANK] for my job—and it’s awful!

I get it. I get it. And the thoughts would be justified.

But last night, instead of begging Jimmer Fredette for an extra five minutes or awkwardly asking him for a cell phone number, I was eating french fries with my kids.

I’ve also already got the next story lined up.

And the guy wants to talk.