In case you missed it, yesterday Rudolph Giuliani, former New York City mayor and Republican presidential candidate, stepped forward to say that he believes Barack Obama does not love America. Which, of course, is a painfully dumb sentiment to utter. Because, even if Barack Obama doesn’t love America, well, how the hell would Giuliani know? And how is it helpful to say such a thing about the sitting president of the United States? And, really, what’s the point?

But it doesn’t matter, because Giuliani—once a viable political figure in certain circles—turned hack talking head long ago. His opinions carry almost as much weight as mine do. And my opinions carry no weight.

Anyhow, the thing that bugs me about the ex-mayor’s words aren’t the words, per se. No, it’s the response from Republican Nation. Namely, shit like this … 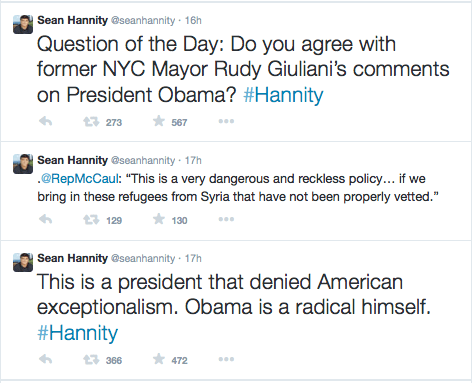 I’m curious. Does anyone here remember the lord’s year of 2003, when a woman named Natalie Maines—lead singer of the Dixie Chicks—said this during a concert in London: “Just so you know, we’re on the good side with y’all. We do not want this war, this violence, and we’re ashamed that the President of the United States is from Texas.”

Do you recall the aftermath? The Dixie Chicks were largely banned from country radio. Stations organized CD burning parties. One right-wing politician and media member after another slammed the Chicks as unpatriotic, as un-American. The crime: Ripping the president in public. How dare they. No—HOW DARE THEY!

Yet here we are, 12 years later, and a sitting president is once again getting torn the shreds. Only the person doing the shredding isn’t a singer. He’s a political figure. A conservative Republican conservative figure. And the president isn’t the one leading us into Iraq. No, he’s the one trying to figure out how to deal with ISIS—an organization that exists because we went into Iraq.

PrevPreviousHow to lose customers you never had
NextWhy is Paul McCartney here?Next