In April of 2007, Nancy Pelosi, the Democratic speaker of the house, visited Damascus to meet with Syrian dictator Bashar al-Assad. It was a ridiculously stupid and vile thing to do, especially considering that George W. Bush, president at the time, froze high-level contacts with Syria. As the Washington Post rightly wrote, “The really striking development here is the attempt by a Democratic congressional leader to substitute her own foreign policy for that of a sitting Republican president.”

In my opinion, Pelosi never lived that one down. It was an error in judgment so enormous and boneheaded that it truly darkens the entirety of her nearly three-decade political career. She was ripped by myriad left-leaning media outlets, and rightly so. She was destroyed by right-leaning talk radio, also rightly so.

In case I’m not being clear, it was as close to treason as an elected official has come over the past decade. A sitting president says, “Please don’t interfere in this hyper-sensitive diplomatic issue,” and you ignore the commander in chief and interfere. Had Pelosi lost her job, it would have been completely justified. I believed that then, and I believe that now. 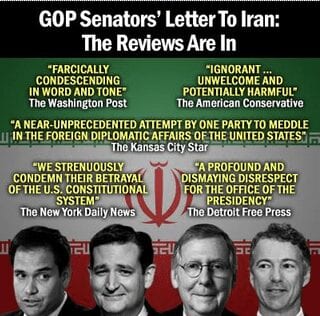 Eight years have passed. And, in case you missed it, two days ago 47 United States senators—all Republicans—wrote an open letter to the Iranian government, warning that any nuclear deal reached between the two nations won’t last once Barack Obama surrenders the presidency. It was, for my money, one of the most egregious acts in the history of two-party politics; a move clearly designed to undermine (and cut the legs out of) a sitting president. “It has come to our attention while observing your nuclear negotiations with our government that you may not fully understand our constitutional system,” the letter read. “Anything not approved by Congress is a mere executive agreement,” the senators wrote. “The next president could revoke such an executive agreement with the stroke of a pen and future Congresses could modify the terms of the agreement at any time.”

The response has been harsh. As we speak, #47traitors remains a trending Twitter hashtag. The New York Daily News ran this fierce headline and front page. A petition to file treason charges against the 47 has been soaring around the Internet. The letter to Iran (which, by the way, was shittily written, and came across as painfully amateurish) was clearly supposed to galvanize the far-right base in anticipation of the closer-and-closer-to-being-here 2016 election season. Instead, however, it seems to have backfired. Even many conservatives thought it was, at best, a dumb thing to do. And they’re right.

Throughout it all, my favorite part has been the right’s nonstop references to the Pelosi-Assad accord. Cries of “treason!” and “wrongheadedness!” from the left have inevitably been greeted by, “What about fuckin’ Pelosi!” from conservatives. Which is so weird, in that Republicans (again, correctly) slammed Pelosi for her lack of decorum and patriotism. Hell, let’s take it a step further. The Republicans slammed the Dixie Chicks (the friggin’ Dixie Chicks!?) for speaking out against George W. Bush during early stages of the Iraqi invasion. Why? Because they insisted it was an un-American thing to do; that we have a president, and he is our leader and symbol, and that we need to support him during tense times.

But that’s the far-right playbook right now. Not that the 47 senators were correct in their actions (clearly, it was a major fuck-up). But that, hey, Democrats have done this, too. And since they’ve done this, too, well, it should be OK for us to do it. Even though we hate when you do it. But when you do it, it’s fucked up. When we do it, it’s patriotic. Because our president is a Muslim and Iran is evil and awful and intent on destroying Israel and cannot— and will not—be acknowledged.

So, ahem, we wrote them a letter.

PS: Update. It’s been a rough few days for Republicans. The new strategy: Blame the letter on Obama. Hee-hee.