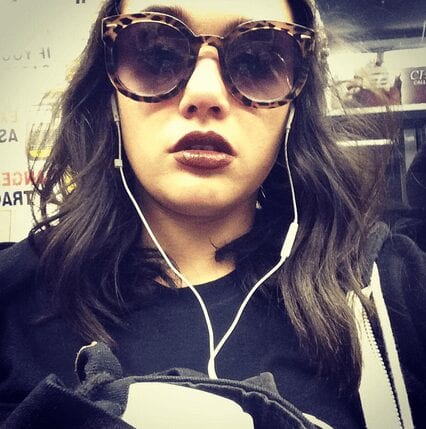 Two seconds ago, when I identified Quaz No. 209 to the wife, she looked at me and said, “Don’t you ever get tired of that sort of thing?”

By “that sort of thing,” she wasn’t referring to actresses or comedians or Chicago residents or people who play bass. Nope, she was referring to my penchant for tracking down actors and actresses from films I enjoyed, then turning them into Q&As.

And, to answer her question: No, I don’t.

Hence, I bring you the lovely, talented, cool Becca Brown, actress, musician and “Katie,” the bass-playing child rocker in the fantastic 2003 flick, “School of Rock.” I actually thought of Becca as a Quaz possibility a few months ago, when I introduced my kids to the movie—which they loved. I starting Googling cast members, and there sat Becca, chillin’ on Twitter. Ah, the magic of social media.

Anyhow, Becca Brown can be found on Twitter and YouTube, sending out some really fun, really raw material. She has an impressive improv and theatre resume, but still lists the School of Rock experience as her best ever.

JEFF PEARLMAN: OK, Becca, so about 20 minutes ago my kids watched School of Rock for the first time—and loved it. I’m sort of curious what it’s like to have been in a movie that everyone loved, but that came out 12 years ago. What I mean is, are your thoughts all fond? With time, do you get tired of being reminded of it? Of people (like me) seeking you out? Does it ever seem like it never happened? Like it’s a blur from childhood?

BECCA BROWN: Honestly, it’s the most fun I’ve had in my entire life and the first thing I ever did, so when people ask me questions about it I don’t get annoyed. I definitely don’t bring it up in conversation before someone else does, though. And sometimes, if I get recognized during a busy brunch shift at Revolution BrewPub (where I work), I get kind of annoyed and also self conscious, like “These people are gonna think I’m such a loser for being a lowly hostess at a bar 12 years later.” I have a very vivid memory of some parts of the filming process, some on set, most off. But a lot of it is one big happy blur.

J.P.: I know you’re a singer and actress, I know you had a pretty major role in School of Rock. But what’s your life path? Like, birth to now, how did it happen? How did you first get into music and acting? And what is it about performing that does it for you?

B.B.: When I was 2-years old, my parents put me in a music class that was mostly percussion and dancing and clapping, and when I was 4 I was old enough to start taking lessons. I had to pick between piano, violin, cello, flute and guitar. I chose guitar and took private weekly lessons in classical guitar. When I was 9 I was on this radio show called From the Top, which is where the casting directors of SoR found both me and Robert Tsai.

I had never acted before (which may have to do with why I had so few lines in the movie) but after filming was over I immediately got an agent and started auditioning for commercials and other movies and pilots and whatnot. I was really close to being Hannah Montana, but you know, nepotism. After several rejections from film auditions, I started doing more theatre and really loving singing I was a huuuuge choir/musical theatre nerd in high school. I majored in straight theatre at University of Illinois at Chicago, got bit by the improv/comedy bug, graduated from UIC, Second City,and iO all within 2014, and now I’m doing comedy shows all over the city—including sketch, improv, improvised musicals and a fellowship at Second City. Also, I just got cast in a musical that will be locally produced in Chicago this fall. When I’m steadily performing and busy with rehearsals and shows and classes, I’m never bored and I don’t have time to complain or feel shitty about life. That’s what keeps me performing.

J.P.: I’ve covered different TV shows and movies being filmed, and it can be euphoric and dull. So what was the School of Rock experience like for you? Like, what stands out? What was Jack Black like? Did it change your life, or was it just a cool experience? And do you keep in touch with any of the people?

B.B.: Filming was kind of a blur, like I mentioned before. JB is the coolest. He and Mike White and Richard Linklater would always prefer to hang with us kids rather than the bigwig producer people, which was really awesome. Everyone on set really loved us and took care of us. We all felt like rock stars. I think, considering the fact that in grade school I was bullied immensely for being a dork, that this was the first time I’d ever felt cool and that I was getting the good kind of attention for my skills/talents/barfbarfbarf. It totally changed my life because I learned the confidence, rock-star attitude, and a lot of the qualities I carry with me on stage today, in improv, in stand up sets, in auditions, in concerts, on dates. Kevin Clark lives in Chicago so I see him on occasion, not enough though. I still talk to Angelo a lot, because he was my on-set crush and still to this day my real-life crush. And really, that’s about it. The reunion in 2013 was insane. Probably the happiest day of my life, actually. We all met up in Austin for a screening of the film and a photo shoot with Entertainment Weekly and then got hammered with Jack, Rick and Mike at the St. Cecilia Hotel and went swimming at 4 am. It was ridiculous. Everyone got so cute over the last 12 years—not that we weren’t adorable already or anything.

J.P.: So this might be a weird question, but you’re 20 years younger than I am. You’ve been brought up with a cell phone, with Facebook, with Instagram. And it seems like—especially your generation—everyone wants to be seen; to be famous; to be known; to matter. Or maybe I’m reading this wrong. Thoughts?

B.B.: I was probably one of the last kids in my class to get a cell phone. In eighth grade, pretty much all the kids in my class had those Sidekicks and texting and I had to call people from my house phone. I got a shitty Nokia going into high school and didn’t have texting or Facebook until maybe my junior year of high school, and my parents heavily monitored both of those things because I constantly fucked up. Now that I have a pretty good following, on Twitter, on Instagram, etc. I feel pretty indifferent to being known, being famous, to mattering. I Tweet shit I think is funny, usually when I’m drunk or sleep deprived, and I take a ridiculous amount of selfies, and I don’t really care who sees it or likes the posts or retweets it. I post that shit for my own enjoyment. 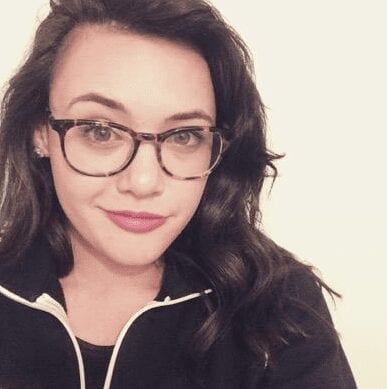 J.P.: Your IMDB page lists you as an actress in two things—School of Rock and a short called “Cool Nerds.” Um, what the hell is “Cool Nerds”? And how did you land it?

B.B.: Cool Nerds! Ahhh. Cool Nerds was an online sketch video I did with some friends from iO. This is the link.

J.P.: Greatest moment of your life in entertainment? Lowest?

B.B.: The School of Rock reunion concert was badass. Definitely in my top three, but my sketch group, The Cupid Players, did a little show in Austin this past August and packed the house with people we didn’t know at all, and s-l-a-y-e-d. Probably my lowest point was when I tripped onstage at the Toronto Film Festival in front of the Olsen twins.

J.P.: What’s the different between a great bass player and a so-so one? I mean, I feel like I can’t tell. Van Halen replaced Michael Anthony—arguably one of the most accomplished rock bass players of all time—with Eddie Van Halen’s teenage son, and nobody seemed to notice. Is it just me?

B.B.: I’d consider myself to be so-so. I’m a guitarist who happens to know how to play bass. I don’t even know how to read bass clef. Flea is great. Entwistle (duh) is great. Mike Dirnt is great. Paul McCartney and I might be on the same-ish level. Very basic. Nothing ridiculous, no bass solos. I’m keeping the rhythm. 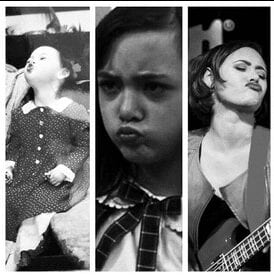 J.P.: What’s it feel like, on stage, when everything is going right? Like, what’s the emotion? What flows through you?

B.B.: Pure bliss. I’ve found that a great show feels way better than a great burger or a great nap or a great orgasm.

J.P.: Jack Black calls, he wants to get the gang back for School of Rock II: Rocking Even Harder. What do they need to offer you to be in?

B.B.: A bass solo, and a Costco sized box of Cheez-its.

• Ever thought you were about to die in a plane crash? If so, what do you recall?: I only fly drunk, so I don’t recall.

• Tell us one thing about School of Rock very few people know.: I don’t actually know how to play cello. I’m just a great fucking actor.

• The next president will be …: My girl Hillary.

• Who do you consider to be the sexiest celebrity alive?: Tough one, but definitely Melissa McCarthy.

• In 26 words, make the case for Lady Gaga: Okay, sure her Oscars performance was good. But have you heard her unreleased shit? Do yourself a favor, please listen to Sexy Ugly. Also, meat dress.

• Without looking it up, list every Hall & Oates song you know: Kiss on My List, Rich Girl, You Make My Dreams Come True, Maneater. All the basic ones—I hate myself.

• What are the odds there’s intelligent life on other planets?: Totes could be a thing.