On Kenny Mayne and flag football … 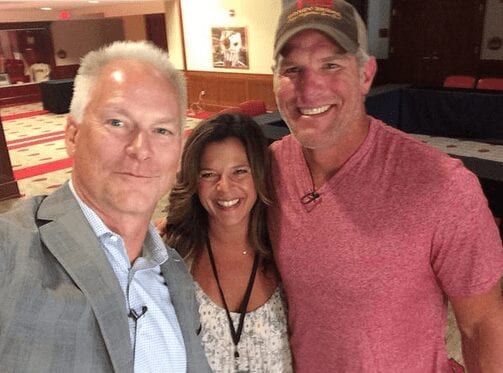 So this past weekend I covered all the Brett Favre festivities going down in Green Bay and Madison. There was a signing, a press conference, his return to Lambeau and, lastly, yesterday’s flag football game on the University of Wisconsin campus.

It was a crazed time, and the one thing most every reporter sought out (with remarkable fruitlessness) was a one-on-one interview with the man of honor.

Simply put, it wasn’t happening. There was a 40-minute press conference on Saturday afternoon, but with a strict NO ONE-ON-ONE QUESTIONS rule for the immediate aftermath. There was a five-minute on-field session after the game, which looked exactly like this … 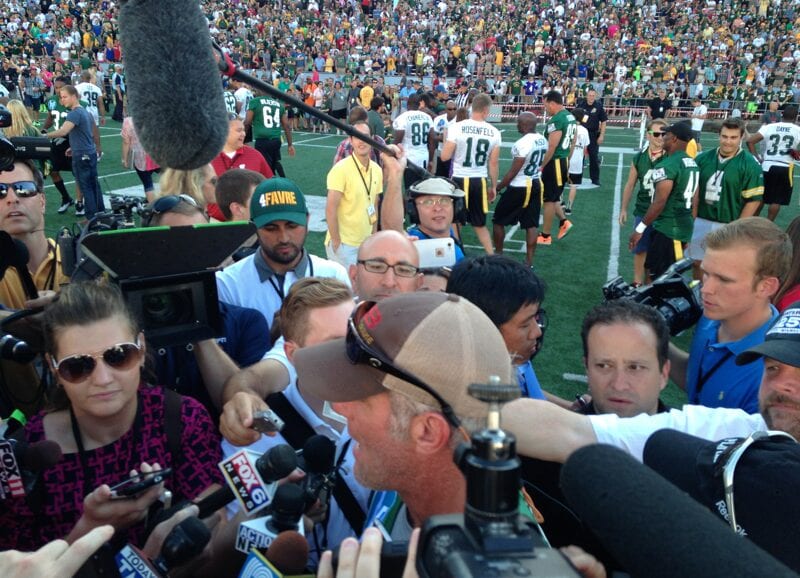 Through it all, one national media member was able to rise above. His name is Kenny Mayne, and the longtime ESPN personality needs no introduction. He’s smart, he’s talented, he’s funny and he’s been doing this job for nearly three decades.

Yesterday, ESPN aired pieces of Mayne’s highly coveted one-on-one sitdown with Favre. And while the chat wasn’t especially revelatory, its existence certainly caused the boiling blood of a few media members (this one included).

Why? Because on the very same day, Mayne played in the Brett Favre Legends Flag Football Game.

Lemme re-state: Mayne was a member of the “NFL Legends” squad, right there with Donovan McNabb and Willie Gault and Roger Craig. He wore a uniform and had a number and played several downs. Which, I suppose, would be OK were Mayne a local construction worker, or a professional dancer, or a teacher or a coach or a horse trainer or a crack dealer.

But Kenny Mayne is a journalist. A journalist who, an argument can be made, landed the biggest sports interview of the weekend.

So why is he playing in the game? Hell, take a step back—why would he want to play in the game? I get the whole, “Awesome! I can tell my kids about this …” but, um, Kenny Mayne never appeared in the NFL. So isn’t it sorta embarrassing? Sorta awkward? Sorta weird? You’re basically this … 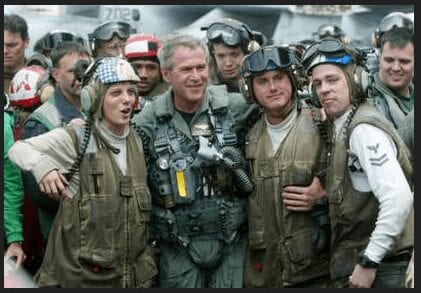 … when most in the business aspire to this … 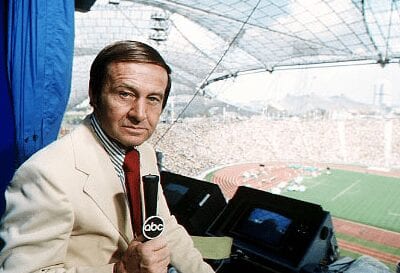 Once upon a time, this shit didn’t fly. Journalists were journalists. The job was to cover, not befriend; to analyze, not yuk. There was a very strict line between media and athlete; an important line that existed to blur conflict of interest appearances and make coverage as in-depth and professional as possible. ESPN, however, forever changed that. Their “stars” seek out celebrity status. They pitch products, make cameo appears on TV shows, mingle with and befriend the jocks. When one points this out, the SportsCenter junkies (an increasingly rare breed, thankfully) attack, noting that, “You’re just jealous” and “Why you hating?”

Well, yeah, I’m jealous. Not of running around on a field with Chad Brown. Nope, I’m jealous of the access. Of the allowances. And I’m hating because I friggin’ love journalism.

And I hate what you’ve done to it.

PS: I have no doubt Mayne means no harm. He probably considers Favre a friend. Which, I guess, is fine. Play NFL dress up in his game. But then don’t be the one to interview him.