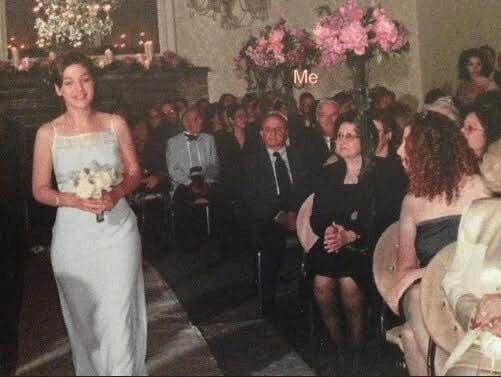 The year was 1999. It was May, and I was invited to the wedding of my Sports Illustrated colleague, Jon Wertheim, and his fiance, Ellie. I was only 27 at the time; young and still somewhat inexperienced in the world of dating. I mean, I’d had a long-term girlfriend, then dated an editor at the magazine. But, otherwise, there were just some random outings and hookups. Not much else.

Anyhow, if there were 200 people at Jon and Ellie’s wedding, I was No. 199 or 200. I was the fringe attendee—groom co-worker who had never even met the bride. In fact, Ellie later told me (repeatedly) that she didn’t want me at the wedding; that the idea of having guests she didn’t know was sorta unappealing (we’re now very close, and she’s one of my all-time favorite people). But I came, sat, ate, chatted. There was a Sports Illustrated table, so I knew seven or eight people. At some point, it was time for speeches. The first person up was the maid of honor—Ellie’s best friend, Catherine.

She stood there, giving her speech, and I was smitten. One of my SI colleagues, Grant Wahl, came up beside me and said, “She’s cute, huh?” I agreed. She was cute. And, clearly, nervous. I recall her voice cracking a bit. That might be merely a memory; I’m not sure. But I thought about her a lot that night, and considered approaching, but … but … but … I didn’t. I mean, I was fringe. She was the maid of honor. She was heavily involved. I was barely on the list. So I just watched, shyly, and we both went home without ever exchanging a word.

When Jon and Ellie returned from their honeymoon, however, I asked for her number. It took some time, but ultimately I scored the digits. Our first date came in September—we went to a Spanish restaurant. I was late and wore a houndstooth vest and faded black T-shirt (that, oddly, had once belonged to my ex-girlfriend’s ex-step-father). Somehow, she overlooked that.

So why am I writing this now? Because last week, while hanging at the Wertheim’s apartment, I found myself digging through their wedding album. And I somehow stumbled upon the above photograph—our first together. Sort of. If you look v-e-r-y closely.

I can’t say that day was the absolute most thrilling of my life.

But it goes down as the most important.