Brian Cushing is embarrassing himself and his family 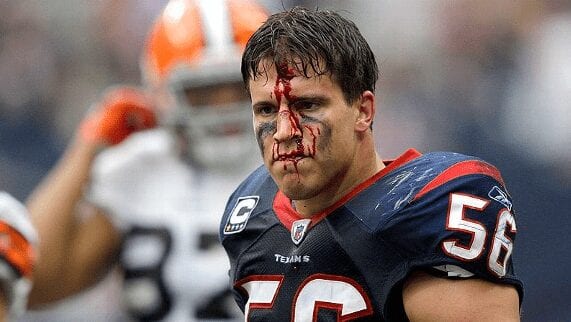 So I’m a little late to this year’s season of Hard Knocks, the excellent HBO series that follows around an NFL team as it prepares for the season. I started watching the episodes on demand two nights ago, and this year’s participating organization—the Houston Texans—prove to be a wonderful choice.

In other words, there are some awesome characters and narratives: The doggedness of J.J. Watt, Houston’s superstar defensive lineman. The quarterback battle between two former New England backups, Brian Hoyer and Ryan Mallett. The injury struggles of halfback Arian Foster. The search for receivers to fill the void of the departed Andre Johnson. Coach Bill O’Brien’s nonstop cursing. On and on and on.

And then there’s Brian Cushing.

If you follow the NFL, you likely know of Cushing, a standout linebacker from New Jersey who played collegiately at USC. Several years ago, Cushing was suspended four games for testing positive for HCG, a fertility drug that is on the league’s banned substances list. He predictably argued his “unique medical condition” triggered the positive test—which, of course, is silly and laughable and was rejected by the NFL’s appeals process.

Anyhow, before Hard Knocks I wouldn’t have recognized Brian Cushing (who looks more than a little like John Rocker) from Brian Boitano. Through the first few episodes, however, he has presented himself as a bully, as asshole, a thug, a dismissive idiot. His wife tells us he’s really a softie, but then—minutes later—he admits he’d like a third child, but only if it’s a boy. He takes extra shots at teammates because it’s, well, just fun, and inappropriately and cruelly insults a coach’s son’s haircut. Repeatedly. Over and over and over.

Were Cushing not a football star, nobody in their right mind would put up with his antics. But this is how we treat athletes.

Or, rather, this is how athletes treat us.

PrevPreviousSometimes we need to be exposed
NextKim Davis in the clink, presidential candidates in crazy landNext