Returning to my roots 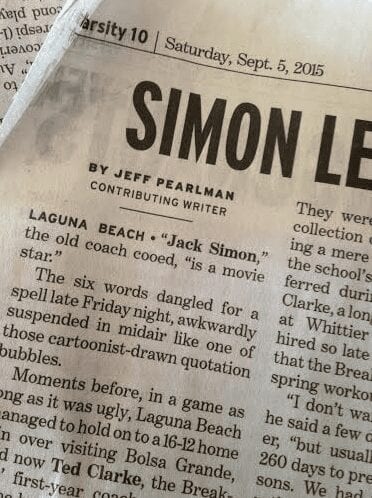 The last time I covered a high school football game was the fall of 1996.

I was wrapping up my days as a sports writer at The Tennessean, the newspaper I called home since graduating from the University of Delaware. A few months earlier Sports Illustrated had hired me to work as a reporter, and now I was spending the last weeks in Nashville itching to bolt and going through the blah-ish pre-departure motions.

One of my final assignments for the paper was to cover a high school football game between Goodpasture Christian and David Lipscomb. Fine. I went out to the field and watched David Kirkau, the Lipscomb quarterback, play like crap. My story included the line, “The Mustangs’ David Kirkau, meanwhile, had an up-and-down sort of day—as in, his passes either went up too high or down too low.”

I thought nothing of it, but the ensuing phone calls were nonstop. How could you write such a thing? Who the hell do you think you are? Hence, the following Saturday night (for my last-ever Tennessean assignment), Larry Taft, my editor, sent me out to Lipscomb to cover its playoff game. “You always show your face after a story like that,” he told me. “It’s the professional way to be.”

Larry was 100-percent correct. I will never forget that night. In the closing minutes of the fourth quarter, with the game out of reach, I strolled down to the Goodpasture sideline to prepare for aftermath interviews. Suddenly, I found myself surrounded by a bunch of players. David Kirkau, the quarterback, stepped forward. “Don’t you ever come back here again!” he said.

The next day I left for Sports Illustrated. I’ve long believed David Kirkau thought he forced me out of town.

That was nineteen long years ago. Over the past two decades, I’ve reported on most of the nation’s big sporting events, ranging from the World Series and March Madness to All-Star Games and NFL playoffs. I’ve been married, I’ve had two kids, I’ve moved from Nashville to New York to California. I’m 43, my back hurts, my knees ache. I’ve written books and started this blog (’96 Jeff Pearlman: “A blog?”).

In short, I’m a different guy.

Anyhow, I was recently overcome by the itch to try and cover high school football once again. I’m not entirely sure why, but I think it has to do with two things: A. I haven’t felt the innocence of sports in many moons; B. I hated that final evening, being surrounded by David Kirkau and his boys.

So, a few weeks ago, I reached out to the Orange County Register and asked Brian Patterson, an assistant sports editor, whether he’d let me give it a go. I forwarded him my resume, explained the situation and hoped for the best. About, oh, 10 minutes later he responded with a kind affirmation. He told me whenever I was ready, he’d find me a game.

Well, last night he found me a game. An awful game—as per my request (knowing so little about the local rivalries, stars, etc, I didn’t want to tackle anything overly important). It was Bolsa Grande High, a team that won one game last season, visiting Laguna Beach High, which opened the season with a 50-0 home loss.

First, I took my son Emmett, who’s 8. I told him the deal—that I was covering the game, that we’d have to pay attention and stay the whole time, that, if he helped, I’d give him $10 from the $50 payday.

Second, Laguna High’s football field is spectacular. You sit in the stands and see the Pacific Ocean. And palm trees. And the sunset. I mean, I can’t imagine a better view in all of American high school football. Splendid.

Fourth, the teams stuggled. But they played r-e-a-l-l-y hard. There were no Cam Newtons or Victor Cruzes here. What there was, however, were kids doing it for the love and the togetherness and the glory and the sweat and the lessons. Bolsa Grande had a 5-foot-3 cornerback who ran like the wind. Laguna Beach had a linebacker, ol’ No. 25, who tackled everything in sight. There also were no asshole parents within earshot. The officials made some predictably brutal calls. But besides some very mild hissing, it was all calm and cool.

Fifth, I felt the buzz. The deadline pressure. The game ended at, oh, 9:30. Emmett and I walked down to the field with about four minutes remaining, and when the final seconds ticked off the clock we chased down Jack Simon, the Laguna Beach quarterback and the game’s unambiguous star. I introduced myself, shook Simon’s hand (accidentally palming his mouth guard, which wasn’t ideal) and looked toward Emmett, whose eyes were the size of melons. I then grabbed Ted Clarke, the coach, got some words. I was home by 10:20, at my kitchen table at 10:30, story sent at exactly 11:15 pm—when it was due. Here’s the link.

Was everything perfect? Eh, no. I didn’t keep my own stats, because Laguna Beach High School had a guy doing a play-by-play book. When I asked if I could use his numbers, he (oddly) refused.

Was it the best thing I’ve ever written? Definitely not.

But I was giddy and energized; I’d forgotten the deadline thrill of a high school football gamer, and when I woke up this morning I tracked down a copy of the Register and flipped open to my piece.