There are few things I’ve loved more this week than the video (posted above) of a bunch of Arizona State sorority members posing for selfies during a Diamondbacks game. I mean, everything about the brief segment is p-e-r-f-e-c-t—from the facial expressions of the had-no-idea-they-were-on-TV young women to the broadcasters’ analysis (If I were starting a band right now, I’d name it “Selfie with the hot dog, selfie with the churro, selfie just with the selfie”) to the millions of generated views.

As anyone who reads this blog knows, I abhor the iPhone-induced self-absorption that has overtaken the nation (old-man rant begins … now). Instead of participating in moments, we record moments in order to prove we participated. Even though, in doing so, we didn’t actually participate. Ugh. Hate it, and loved the idiocy of the selfie being exposed.

But here’s the thing: For as much as I dislike the act (and, certainly, it’s no crime), I love the reaction from the sorority. Although Fox Sports didn’t do anything terribly wrong, the broadcasters did sorta kinda attempt to humiliate a bunch of college kids. So the network tried to make peace by offering the sorority free tickets to an upcoming game. And this was the response … 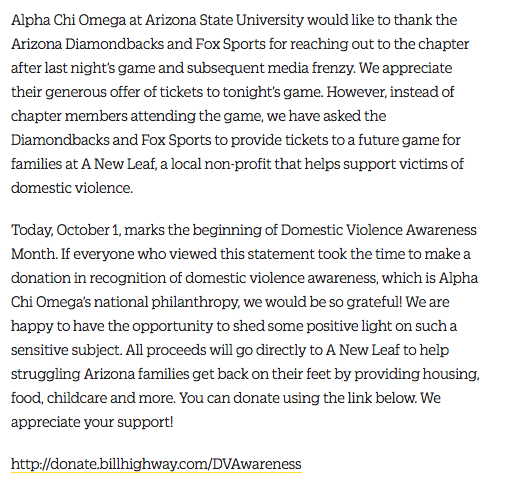 One more thing: I won’t name names, but a local high school football team is having its players wear pink socks this week, for breast cancer awareness. I inquired whether donations were being made, and was told, “No, it’s just about awareness.” Which, of course, is laughable, and some serious bullshit. Wearing pink socks for a sporting event doesn’t promote awareness. It promotes pink socks. And the football team.

In other words, there’s a difference between doing good and looking good.

The sorority didn’t look good. But they did good.

Which is the most important good of all.