An idea from Sandra 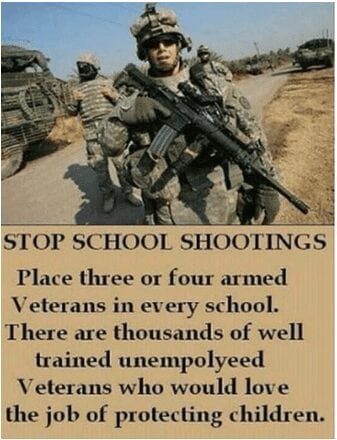 So every now and then I find myself lost in Twitter, scanning over the timelines and feeds of various people. Tonight, I was particularly enamored by Sandra (@digisimplified), a woman from Austin, Texas whose bio looks exactly like, well this … 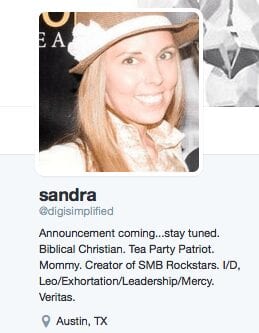 Now, to be clear, I’m betting, were we hanging out at a restaurant or party or whatever, Sandra and I would probably get along quite well. That’s the evil thing about social media and political leanings—I only get to see Sandra as a one-dimensional foreign entity on my computer screen. To me, she’s simply a Christian Texan with a fondness for cool hats who likes the Bible and the Tea Party and has some sort of business called SMB Rockstars (I Googled it, but only found this. Which might be Sanrda’s, though the geographical disparity makes it doubtful). I don’t know what her laugh is like, or what TV shows she digs, or whether she’s more Astros or Rangers, or neither. I don’t know if she’s visited New York or Los Angeles; if she hates pizza but digs sushi. Is she a mom? A wife? Both? Neither? Does she have siblings? Does she make good money, or struggle? I don’t know any of this, because, again, to me she’s just an image on a screen.

I’m kind of babbling, but it’s purposeful. What caught my eye about Sandra’s timeline was the photo that heads this post. Now, Sandra’s almost certainly not responsible for its origin (as everyone knows, these things float around and turn vital in the blink of an eye), but—by Tweeting it out to her 162 followers—she probably endorses the ideas of A. Placing three or four veterans in every school in America.; B. Arming them.

And this is where social media turns funky. See, I wish Sandra was here, living next door to me; or at least working at the table over in Starbucks. Because I need to ask her some questions. First, do you really want to put armed veterans in schools? Do you really think it’s a good idea? That it’ll make our kids safer? After all we know about PTSD (Post Traumatic Stress Disorder)? I mean, you’re aware there are far more cases of PTSD than there are school shootings, no? So, while I certainly love and respect veterans (as I’m 100-percent certain you do), might this be, eh, not the sharpest idea that’s come to the forefront?

Second, who’s paying for it? There are, according to recent studies, approximately 98,000 public schools in the United States. Let’s go three armed veterans per school. That’s … wait for it … wait for it—294,000 veterans put to work. Which sounds terrific on the surface. Hell, who doesn’t want to give veterans jobs? Let’s say, at the least, we pay each veteran $10 per hour, and have him/her work, oh, 30 hours per week. So that’s $300 per week for 40 weeks of the year. Which means we’ll be paying each veteran $12,000 a year. Forget for a moment that nobody’s living comfortably on $12,000 a year, and let’s think big picture: With three (forget four) guards per school, working 30 hours per week for 40 weeks at $10 an hour, we’re adding $352,800,000 (minimum) to the budget of the Department of Education.

Now, here’s the best part: Republicans (well, conservative Republicans) have been trying to slash the DOE budget for years. Hell, just a few months ago the House GOP set forth a plan to reduce its budget by $3 billion, mainly by killing off a bunch of programs including the School Improvement Grants, the Preschool Development Grant, Investing in Innovation, and the Teacher Incentive Fund). So now, while gutting educational initiatives, we’re going to add to the budget so we can employ armed soldiers (some of whom, almost certainly, struggle or will struggle with PTSD) by placing them in the hallways?

It’s a bad idea, obviously. Which doesn’t mean Sandra and/or her cohorts are bad people. We can hold different beliefs without labeling one another as libtards or Tea Baggers or whatever. I’m sure Sandra loves America, just as I love America. She probably (maybe?) has liberal friends, just as I have (many) conservative friends. I’m sorta thinking, if we all hung out and talked over cake and lemonade (as opposed to merely slinging Twitter arrows), we could hash some stuff out. Certainly there’s compromise to be had out there. Conservatives, is a national gun registry database such an objectionable idea? Liberals, could we consider the possibility of having an armed guard positioned at the front entrance of a school? Is George W. Bush as evil a guy as I thought he was? No. Is Barack Obama truly Satan (I’m guessing Sandra’s nodding her head), or just a person you’ve heaped all your anger upon?

Peace, Sandra. I mean no harm. Just stumbled upon you.